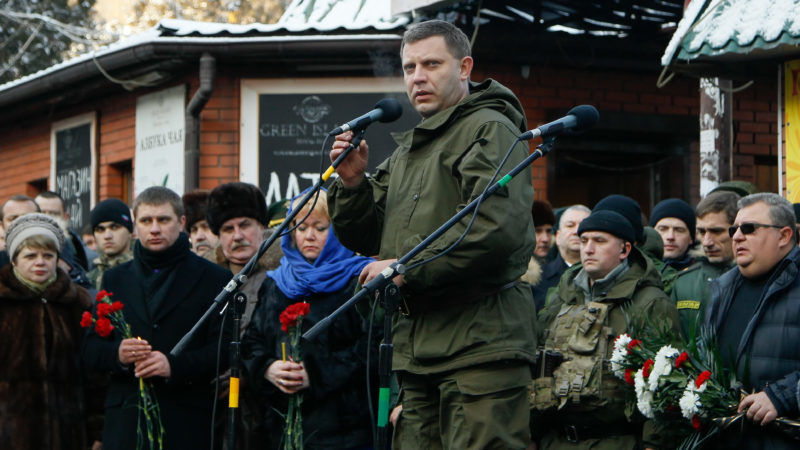 The pro-Russian rebel leader of a breakaway region in eastern Ukraine proposed on Tuesday (18 July) replacing Ukraine with a new federal state, in comments that could further undermine a 2015 peace deal that is already faltering.

Ukrainian President Petro Poroshenko rejected the idea, describing Alexander Zakharchenko, leader of the self-proclaimed Donetsk People’s Republic (DNR), as part of “a puppet show”, with Russia pulling his strings in order to relay a message.

France and Germany, which are involved in diplomatic efforts to end the Ukraine crisis, also condemned the proposal.

Kremlin spokesman Dmitry Peskov told Russian agencies that Zakharchenko’s statement was Zakharchenko’s own initiative and that the Kremlin had learned about it from media reports.

Ukrainian officials contend that Russia wants to show the world, and the United States especially, that it can keep the crisis in a suspended state and deepen it if need be. A new US envoy for the Ukraine crisis was appointed this month and Moscow and Washington are likely to start regularly engaging on the issue.

Zakharchenko, who would scarcely have expected anything other than outright rejection from Kiev, said in a declaration that he and his allies were proposing a new state called Malorossiya (Little Russia) be set up with its capital in rebel-held Donetsk.

Malorossiya was the term used to describe swaths of modern-day Ukraine when they were part of the Russian Empire in tsarist times and is one many Ukrainians today regard as offensive.

Ukraine, a country of about 42.5 million people, declared independence from Moscow in 1991.

Separatists in Donbass used the term of Novorossiya with reference to the territories they control, and created a political party with the same name.

“We are proposing to residents of Ukraine a peaceful way out of a difficult situation without war. It’s our last proposal,” Zakharchenko said in a statement. The new state would be federal, with regions enjoying a large degree of autonomy.

He said the move was backed by delegates from various Ukrainian regions, but a statement from the neighbouring rebel territory of the self-proclaimed Luhansk People’s Republic said it had been unaware of the initiative and did not support it.

His declaration cast a shadow over the faltering Minsk peace agreement between the rebels and the Ukrainian government, which has failed to quell fighting between the two sides and has only been partially implemented since a pro-Russian uprising erupted in eastern Ukraine in 2014.

Russia denies accusations it has delivered arms and provided troops backing rebels in the industrial, largely Russian-speaking east. On Tuesday the Kremlin said it remained committed to the Minsk peace deal.

Yevhen Marchuk, Ukraine’s representative in the talks on implementing the peace deal, told Ukrainian TV channel 112.ua that Zakharchenko’s declaration would complicate negotiations and looked like a Russian attempt to sabotage the process.

France condemned the idea and demanded Russia do more to prevent a further escalation. A German government spokeswoman also criticised the move, calling it “totally unacceptable”.

Ukraine’s top military commander, Viktor Muzhenko, said on social media that the Ukrainian people would “bury” Malorossiya, calling the plan one of the rebels’ “sick fantasies”.

Three former rebel leaders told Reuters in May that a top aide to Russian President Vladimir Putin decides how the pro-Moscow administration of eastern Ukraine is run and who gets what jobs there, challenging Kremlin denials that it calls the shots in the region.