Refugees set up camp in the centre of Paris. [Evan Bench/Flickr]

The refugee crisis has generated significant costs for certain countries and has led donors to rethink the principles of development aid.

Discussions are ongoing within the OECD’s Development Assistance Committee (DAC), a group of the world’s major aid donors, over which expenses arising from the refugee crisis should be put through a country’s accounts as funding for international solidarity.

This club of 29 largely well-off countries decides who is eligible for official development assistance (ODA), and how these funds should be spent.

Erik Solheim, the president of the DAC, told EURACTIV, “We will be holding a high-level meeting with the ministers from the member states on 18 and 19 February, where they will examine reforms to the accounting of development assistance.” 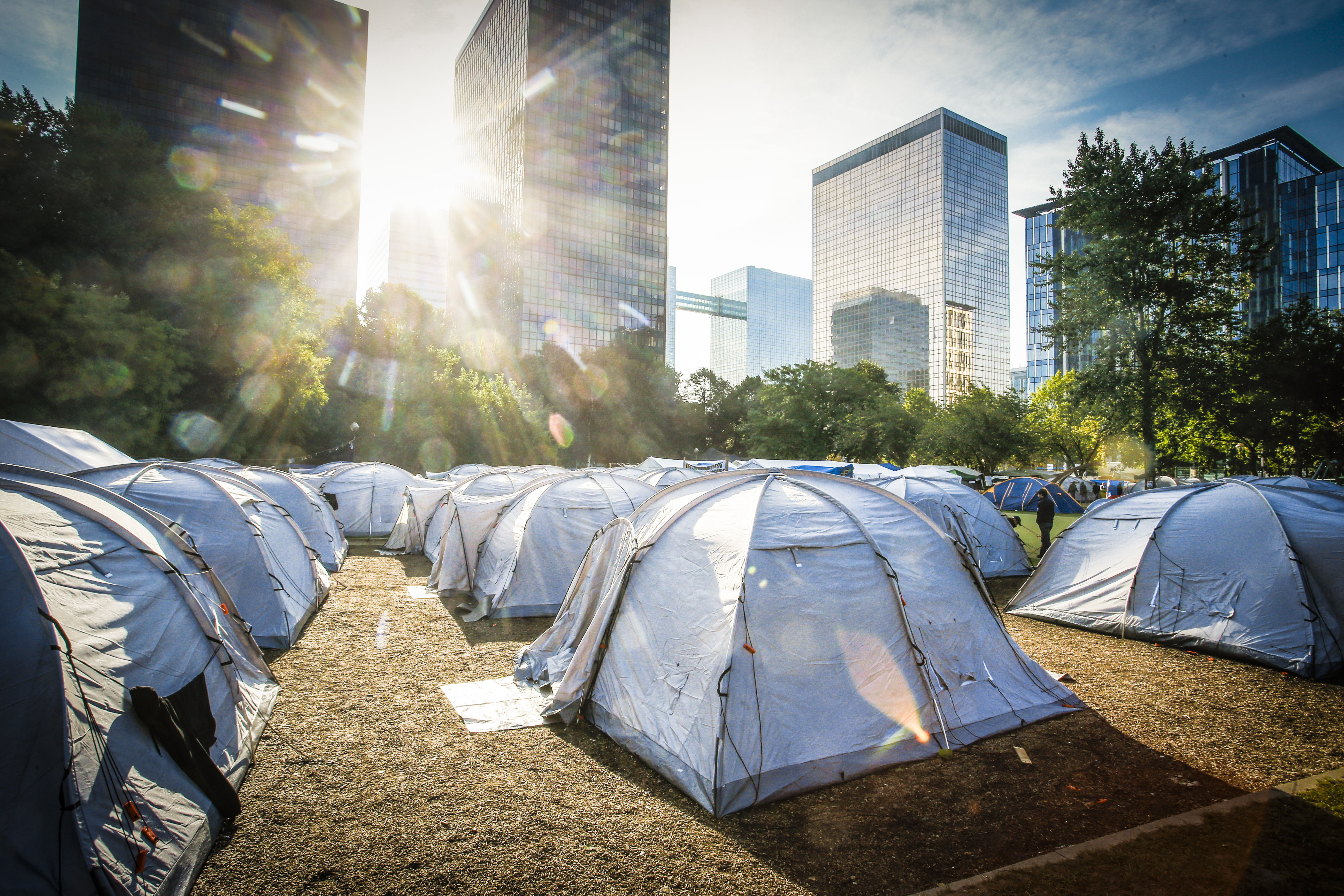 The controversial alterations on the table could broaden the definition of ODA to cover spending on peace and security efforts, as well as to take into account financing from private sources in a country’s overall ODA budget.

Pushed up the agenda by various crises, the development aid reforms could take the tool into new sectors. France, for example, has requested that the cost of peacekeeping operations in certain developing countries be eligible for accounting as ODA.

During a foreign affairs council in Brussels, EU member states tried in vain to revitalise the planned EUFOR mission to the Central African Republic. France’s beckoning goes unheeded as it continues to play a critical role in the country. EURACTIV France reports.

But ministers will also discuss other aspects of security spending. According to our sources, this may include the cost of strengthening police forces in developing countries and fighting extremism.

One of the proposals under consideration states that efforts to prevent violent extremism in developing countries should be accounted for as development assistance, “if they are carried out by partner countries and their main objective is development”.

“But we will also look at the question of the cost of refugees,” Solheim added. This has become a highly sensitive issue in several European countries, which have begun diverting part of their development budget to deal with the new costs inflicted on them by the refugee crisis.

“I believe we should narrow the scope for accounting the costs of hosting refugees as official development assistance, in order to protect the aid money that goes to the less advanced countries and improve development aid as a tool,” the DAC president said.

But for some members of the Development Assistance Committee, stricter rules on the accounting of aid could pose serious problems. 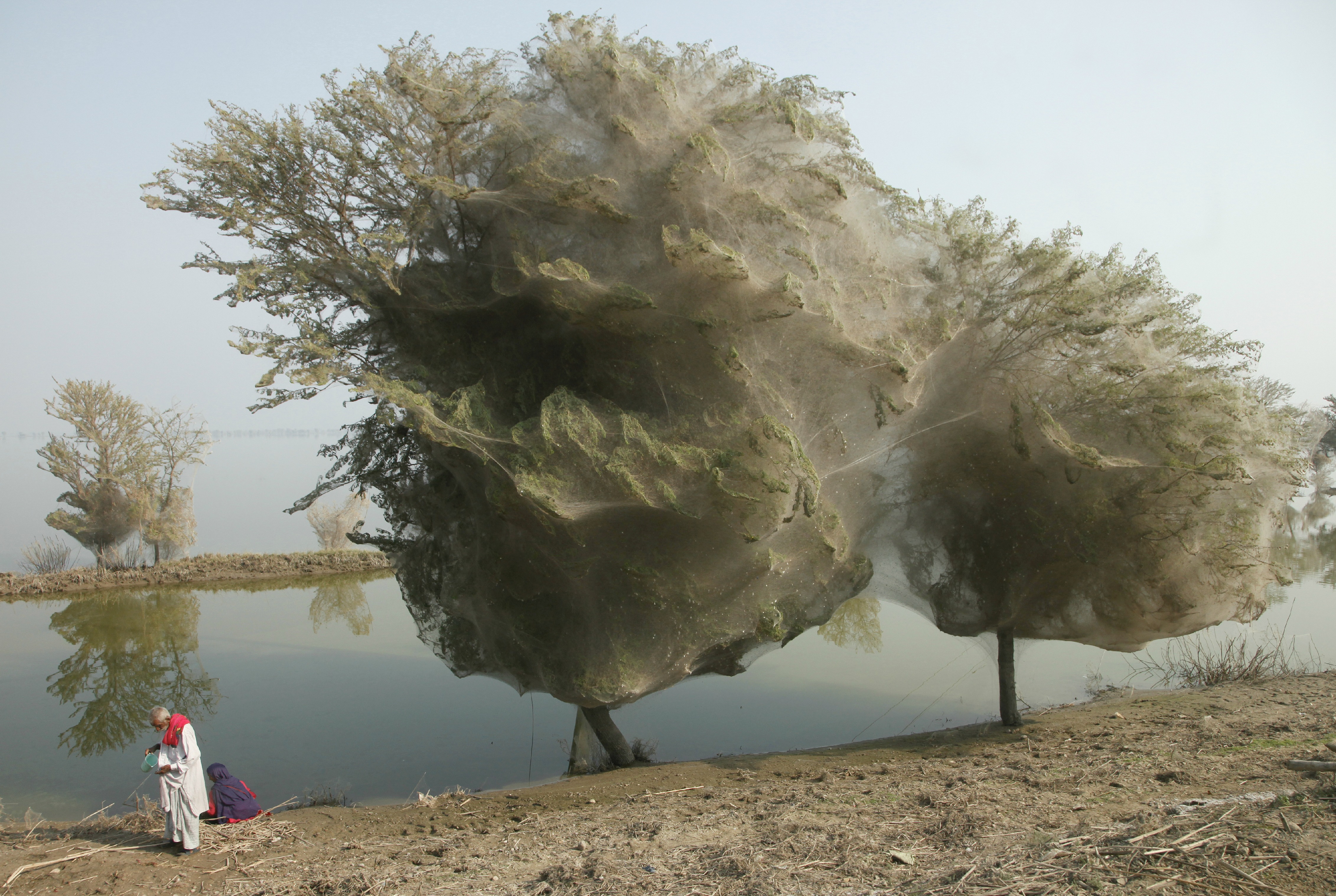 The OECD rules currently authorise countries to record spending linked to the reception and hosting of refugees in their development budgets for up to 12 months. All the EU countries except Luxembourg, Bulgaria and Poland have so far taken advantage of this flexibility.

As costs continue to rise for the majority of European countries, they are increasingly forced to dig into their international solidarity budgets to meet the shortfall.

“Today, the Nordic countries in particular, as well as Switzerland, have dealt with the migration crisis largely by turning to their development assistance budgets,” Solheim said. 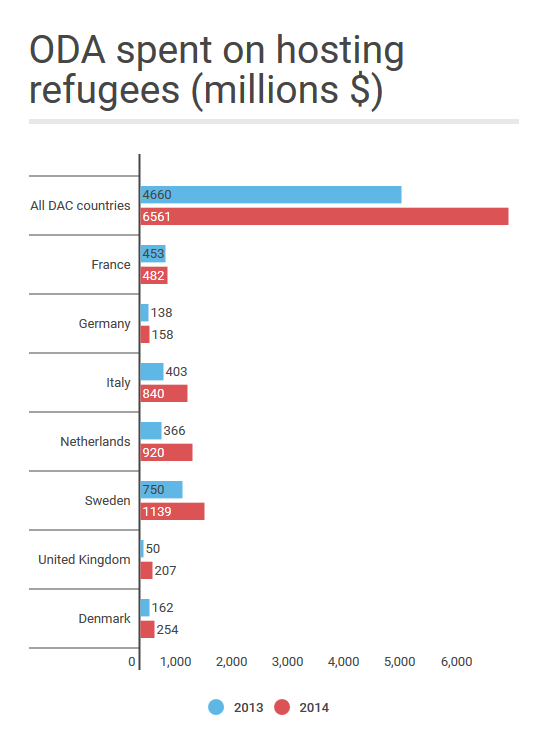 ODA in millions of $

This trend is far from anecdotal; it will have real and lasting effects on the ability of donor countries to keep their aid promises.

“In Sweden, 30% of the ODA budget for 2016 has been allocated to the hosting of refugees, which means a 10% cut in funding for the poorest countries in real terms,” said Friederike Röder, the director of the NGO ONE France.

But this is perfectly acceptable under the current OECD rules.

“This accounting rule allows donor countries to dig directly into their development aid budgets, even though hosting refugees has no link with the development of countries. We are calling for these costs to be excluded from the ODA framework altogether,” the ONE director said.

For now, the representatives of the donor countries have agreed on the need for reform on the question of refugees, but expectations vary within the group. Some countries have even argued for a more expansive ruling on what they can record as ODA.

“Certain countries have asked for permission to account for the costs of receiving refugees as ODA for two years, instead of one. Others have proposed the establishment of a 30% threshold,” Röder said.

NGOs have warned that whatever the outcome of this debate, it is likely that the poorest countries will continue to see their aid funds eroded.

The OECD has begun the process of redefining Official Development Assistance (ODA), to go with the new post-2015 Sustainable Development Goals.