Republicans push back against Trump plan to cut foreign aid 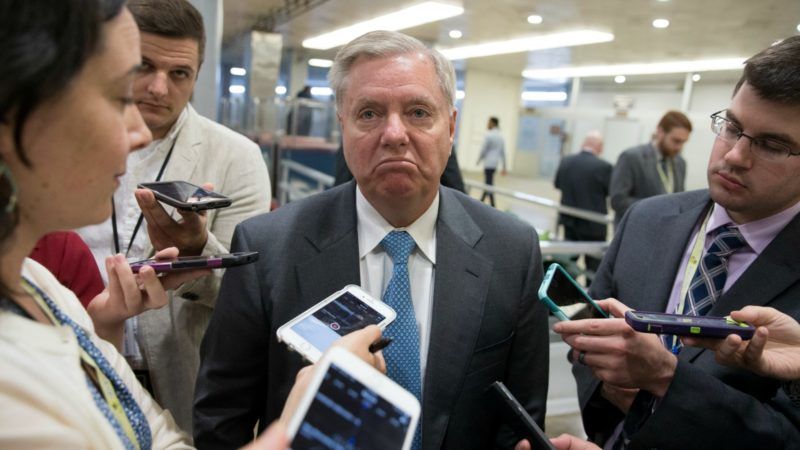 US President Donald Trump’s fellow Republicans in Congress on Tuesday (23 May) assailed his proposed cuts in the diplomatic and foreign aid budget, making it unlikely the cutbacks in global health, peacekeeping and other programs will take effect.

Senator Lindsey Graham, the Republican chairman of the Senate subcommittee responsible for diplomacy and foreign aid spending, said Trump’s proposal to cut the diplomacy and aid budget by one-third would “gut soft power.”

“If we implemented this budget, you’d have to retreat from the world or put a lot of people at risk,” Graham told reporters. “This budget is not going to go anywhere.”

Congress sets the federal government budget, and Republicans who control both houses and Democrats have said they do not support such drastic cuts.

The funding cuts in Trump’s plan for the fiscal year beginning in October would mark a stark decrease in non-military US government engagement abroad as the administration pursues Trump’s “America First” agenda.

Trump Administration officials defend the cuts by saying the rest of the world must do its “fair share” as the United States retreats from its traditional spending abroad.

In all, the Trump proposal cuts about 32% from US diplomacy and aid budgets, or nearly $19 billion.

Trump’s budget would cut US funding for global health programs including efforts focusing on HIV/AIDS, tuberculosis and malaria by about one quarter, to about $6.5 billion for 2018.

The budget proposal envisions cuts to the President’s Emergency Plan for AIDS Relief (PEPFAR) program, a cornerstone of US global health assistance, which supports HIV/AIDS treatment, testing and counselling for millions of people worldwide. Under Trump’s budget, PEPFAR funding would be $5 billion per year compared to about $6 billion annually now, the State Department said.

No patient currently receiving antiretroviral therapy, a treatment for HIV, through PEPFAR funds will lose that treatment, officials said.

The budget proposal also includes a steep cut to funding for international organisations, without specifying which groups might lose their funding. The NATO military alliance would continue to be fully funded.

The European Commission made only vague statements yesterday (26 January), suggesting it was not part of a Dutch/Belgian initiative set up to counteract Donald Trump’s ban on US federal funding for NGOs providing birth control support or abortions in developing countries.

US funding for international peacekeeping would fall to about $1.5 billion, a cut of over 50% from 2017 levels.

The United States is the biggest contributor to the United Nations, paying 22 % of the $5.4 billion core budget and 28.5% of the $7.9 billion peacekeeping budget

“Given the growing threats we face, we should be supporting – not slashing – anti-terrorism, law enforcement, and humanitarian programs,” Representative Ed Royce (R-California), chairman of the House Foreign Affairs Committee, said in a statement.

Trump’s budget would reduce funding for educational and cultural exchanges by 52%, including a 47% cut to the Fulbright Program, which enables US citizens to go abroad and brings foreign students to study in the United States.

The Trump proposal assumes the State Department will maintain its current structure, though Tillerson has said he wants to restructure the agency and find efficiencies.

Nonetheless, the budget makes major shifts in some funding.

A core, $2.8 billion development account overseen by USAID that funds agricultural, water, sanitation and other projects would be consolidated with other funding streams to create the Economic Support and Development Fund. That new account would then be cut by about 45 percent compared to current funding levels.