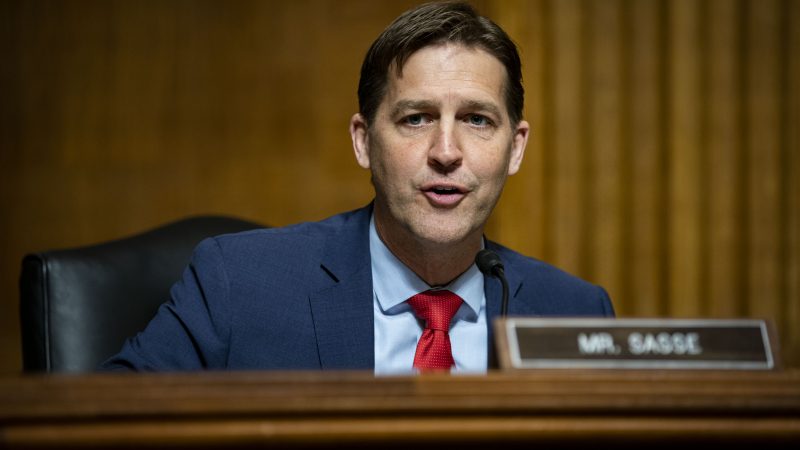 File photo. Senator Ben Sasse, a Republican from Nebraska and ranking member of the Senate Judiciary Subcommittee on Privacy, Technology, and the Law, speaks during a hearing in Washington, DC, USA, 27 April 2021. [Pool/EPA/EFE]

Republican US lawmakers on Tuesday (18 May) slammed the Biden administration over a media report that it will waive sanctions on the company behind Russia’s Nord Stream 2 natural gas pipeline to Europe, even as the US secretary of state told his German counterpart Washington opposes the project.

Republicans accused the administration of handing Russian President Vladimir Putin a strategic advantage in Europe after Axios reported Washington will waive sanctions on Nord Stream 2 AG, the company overseeing construction of the pipeline. It also said sanctions would be waived on Matthias Warnig, a Putin ally and the company’s CEO.

The pipeline would bypass Ukraine, depriving it of lucrative transit fees and undermining its struggle against Russian aggression.

The waivers will be in a report that the State Department will soon send to Congress, and will come despite sanctionable activity being committed by Nord Stream 2 AG and Warnig, said the Axios story, which Reuters was unable to verify.

The administration will sanction some boats helping to build the project, it said. The pipeline would take double Moscow’s ability to ship gas from the Russian Arctic to Germany under the Baltic Sea.

“Two months ago, President Biden called Putin a ‘killer,’ but today he’s planning to give Putin, his regime, and his cronies massive strategic leverage in Europe,” Senator Ben Sasse said in a release.

“If the Putin regime is allowed to finish this pipeline, it will be because the Biden Administration chose to let it happen,” McCaul said in a release.

A State Department spokesperson said: “The Biden Administration has been clear that the Nord Stream 2 pipeline is a Russian geopolitical project that threatens European energy security and that of Ukraine and eastern flank NATO Allies and partners.”

Gazprom, the Russian state energy company financing the project, and its western partners are racing to complete the project, now about 95% complete.

Blinken spoke with Germany’s Foreign Minister Heiko Maas on Tuesday. State Department spokesman Ned Price said Blinken “underscored the US commitment to work with allies and partners to counter Russian efforts to undermine our collective security, and in that vein, emphasized US opposition to the Nord Stream 2 pipeline.”