Return of refugees to Syria timidly comes on the agenda 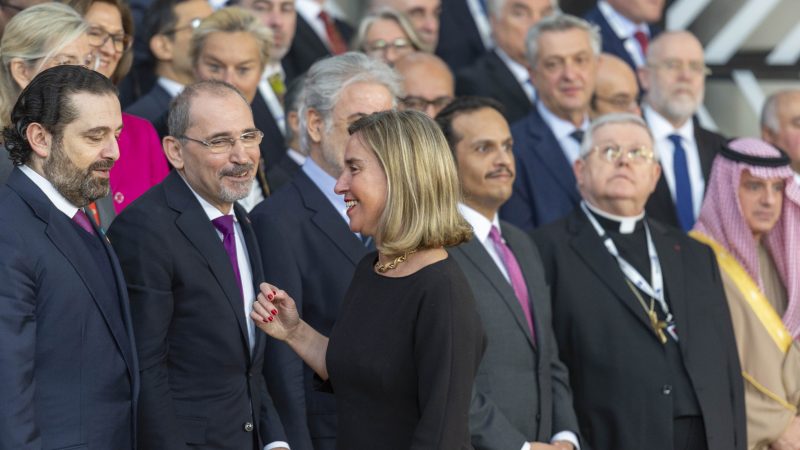 Federica Mogherini [C] preparing for family photo at the Conference “Supporting the Future of Syria and the Region” on 14 March 2019. [Council newsroom]

Key speakers at a Brussels-held conference dedicated to Syria made first timid references on Thursday (14 March) to the need to prepare for the return of Syrian refugees to their homeland, as the eight-year-long war appeared to be coming to an end.

This marks a shift from previous warnings that such moves were premature. But a senior UN official said the need for food, supplies and funding was now increasing, and also warned that an assault against the last rebel enclave would create “a humanitarian catastrophe”.

As many as 12 million Syrians, around half of the pre-war population, are either refugees or displaced inside Syria.

The “Supporting the Future of Syria and the Region” conference is a pledging event, the third of its kind, after similar gatherings in Kuwait in 2014 and in London in 2016.

This year’s event underscores Europe’s dilemma over efforts to isolate President Bashar al-Assad, as the United States pulls back its troops and the Syrian leader emerges victorious from the conflict, backed by Russia and Iran. The latter two were among the invited countries, as well as the USA.

The EU has repeatedly made longer-term reconstruction support conditional on a UN-led peace process to end the war that has killed hundreds of thousands of people.

But with the UN process stuck, Russia’s 2015 military intervention proving decisive for Assad, and Arab neighbours considering re-establishing diplomatic ties, European governments are divided over whether to rebuild the country.

“The US is pulling out and the Russians don’t have the money. That’s the context,” said an EU official quoted by Reuters.

Germany, France and the Netherlands are forthright in defending a policy of withholding reconstruction money until a transition away from Assad is underway. No official representatives of Syria were invited to the conference.

But Italy, Austria and Hungary, all fierce critics of European immigration policy, favour talking to Syrian authorities to allow millions of refugees to go home.

EU foreign affairs chief Federica Mogherini said there was a risk that Syria gets stuck in a situation of “no war – no peace”.

Filippo Grandi, United Nations High Commissioner for Refugees, said that looking ahead, 2019 might be the first year since the war started “in which more people – both the internally displaced and refugees – return home than are newly displaced”.

The UNHCR chief said he had been in Syria last week and was “struck and humbled” – by the resilience of the Syrian people.

“Amidst grave destruction, areas of remaining insecurity, and lack of basic essentials, including food, medicine, jobs and water, many Syrians are returning home. Humanitarian and other agencies are doing what they can, but as large numbers of internally displaced people, and some refugees, are making this difficult decision and are returning home, the needs increase”, Grandi said.

He said that most refugees see their future back home in Syria. “We know of 56,000 who have returned through organised movements last year – but the number is surely higher”, Grandi added.

“I am pleased to say that we are working with the government of Syria, and others. And I would particularly like to thank the Russian Federation for their cooperation in addressing the concerns that refugees are articulating in respect of return,” the UNHCR chief said.

Under the UN appeal, $3.3 billion is required to help those displaced inside Syria, and $5.5 billion is needed for refugees and host communities in neighbouring countries.

Marc Lowcock, under secretary general for humanitarian affairs, earlier told journalists that it looked as if “at least $6.5 billion” and possibly close to $7 billion had been pledged.

“That is a very significant result and if that is where we end up at the end of the day, we will be pleased,” he said. Mogherini announced that the EU was committing €560 million for delivering assistance to the people of Syria for 2019 and the same amount for 2020, with a commitment to keep this level in the future.

The UN high official said he was increasingly alarmed at the deteriorating situation in Idlib, close to the Turkish border. More than 90 people were killed by shelling and airstrikes just last month, nearly half of them children, he said.

“Let me repeat what we have said many times before. A large-scale military assault on Idlib would create the worst humanitarian catastrophe the world has seen in the 21st century. That is, I believe, simply unacceptable,” Grandi stated.

The Syrian army, aided by Russian warplanes, attacked rebel-held towns near Idlib in the most extensive bombardment in months against the last remaining rebel bastion in the country.

Rebels who have fought to topple President al-Assad for eight years are now largely confined to an enclave in the northwest near the Turkish border. Around four million people now live there, including hundreds of thousands of Assad’s opponents who fled there from other parts of the country.

Turkey, which began patrols in the buffer zone on Friday, has condemned what it said were increasing provocations to wreck the truce and warned that a bombing campaign by the Russians and the Syrian army would cause a major humanitarian crisis.

The enclave is protected by a “de-escalation zone” agreement brokered last year by Assad’s main international backers Russia and Iran, and Turkey, which has supported the rebels in the past and has sent troops to monitor the truce.

Turkish foreign minister Mevlüt Çavuşoğlu said that 320,000 Syrians had returned thanks to “the anti-terrorism operations” conducted by Turkey in Syria.