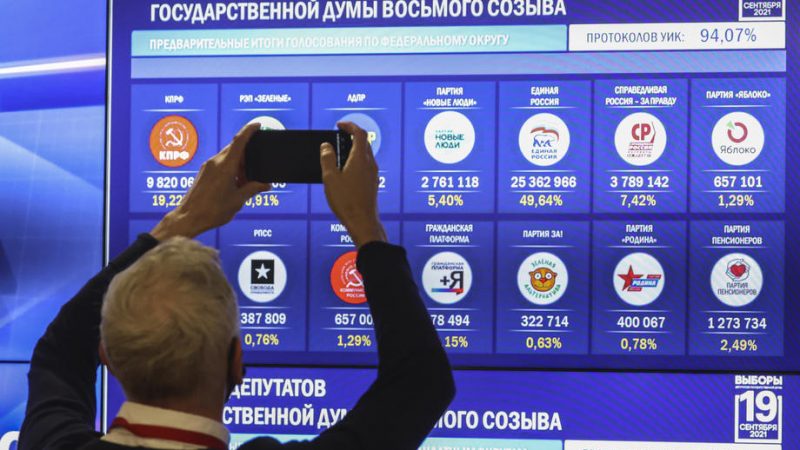 With 99.9% of ballots counted, the Central Election Commission said United Russia had won nearly 50% of the vote, with its nearest rival, the Communist Party, taking just under 19%. 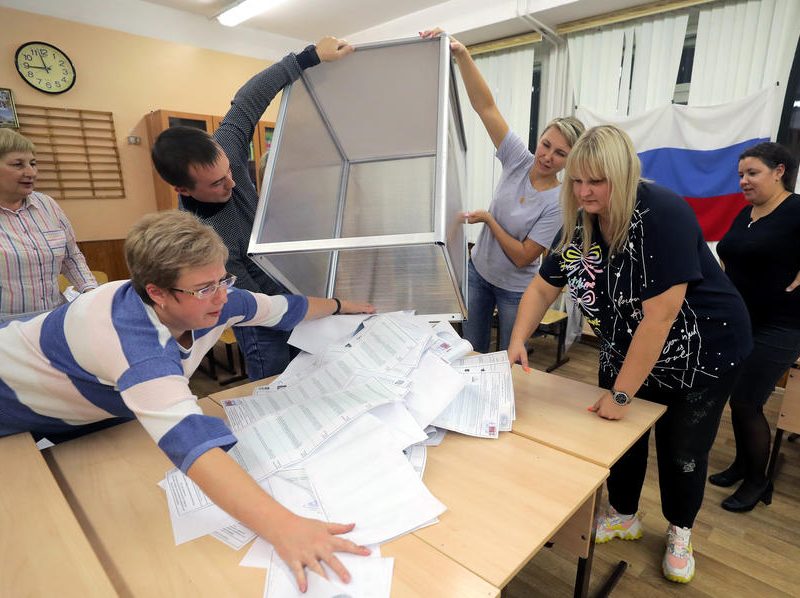 Russia’s ruling United Russia party, which supports President Vladimir Putin, retained its parliamentary majority after an election and a sweeping crackdown on its critics, despite losing over a tenth of its support, partial results on Monday (20 September) showed.

The scale of the victory means United Russia will have more than two-thirds of deputies in the 450-seat State Duma lower house of parliament. This will enable it to continue to push through laws without having to rely on other parties.

United Russia, a party that Putin helped found, had always been expected to win. Its most vociferous critics, allies of jailed Kremlin critic Alexei Navalny, were prevented from taking part in the election after a court branded them extremists in June.

Pre-vote surveys had suggested that discontent over years of faltering living standards and corruption allegations would dent United Russia’s support. In the event, near final official results showed it securing around only 4% less than the last time a similar election was held in 2016.

In a statement, EU foreign affairs chief Josep Borrell said the “EU does not and will not recognise the illegal annexation of Crimea and the city of Sevastopol by the Russian Federation, and therefore does not recognise the so-called elections held in the occupied Crimean peninsula”.

“The Russian Federation‘s decision to involve residents of the non-government controlled territories of the Donetsk and Luhansk regions in Ukraine in the State Duma, regional and local elections runs counter to the spirit and objectives of the Minsk agreements. The EU remains unwavering in its support for the territorial integrity and sovereignty of Ukraine”, the statement says.

The US State Department said the election conditions had not been conducive to free and fair proceedings, while Britain’s foreign ministry called the vote a setback for democratic freedom.

Up to 200 Communist protesters who felt cheated gathered for a demonstration in Moscow on Monday evening as police looked on.

Candidates opposed to United Russia in the capital had been ahead in more than half of 15 electoral districts, but all lost after electronic voters were added in.

“It’s a disgrace and a real crime!” Communist candidate Valery Rashkin told the crowd, saying his party would keep protesting until what he called the falsified electronic Moscow results were overturned. Rashkin said the protesters would be back on Saturday.

“With such a colossal number of violations, the results of the State Duma elections cannot be recognised as clean, honest or legitimate,” said Lyubov Sobol, a Navalny aide.

Sobol had hoped to run for parliament herself but Navalny’s allies were barred from taking part after the extremism designation. Critical media and non-governmental organisations were also targeted by the authorities in the election run-up.

Electoral authorities said they had voided any results at voting stations where there had been obvious irregularities and that the overall contest had been fair.

According to Ella Pamfilova, the head of the election commission, the vote was exceptionally clean and transparent. She told Putin she would look into any complaints before declaring final results on Friday.

Putin gave a short statement, thanking voters after the Kremlin had hailed the result, saying United Russia had confirmed its role as the leading party. The Kremlin said the election had been competitive, open and honest.

The outcome is unlikely to change the political landscape, with Putin, who has been in power as president or prime minister since 1999, still dominating before the next presidential election in 2024.

Putin has yet to say whether he will run.

Dmitri Trenin, director of the Carnegie Moscow Center, said the Kremlin would see the election win as a victory for the political system it presides over.

“Moreover, it (the Kremlin) has won the post-election situation: no street protests across the country…Major test on road to 2024 passed,” Trenin wrote on Twitter.

Putin, who turns 69 next month, remains a popular figure with many Russians who credit him with standing up to the West.

The near complete results showed the Communist Party finishing in second, followed by the nationalist LDPR party and the Fair Russia party with around 7.5% each. All three parties usually back the Kremlin on most key issues.

A new party called “New People”, appeared to have squeezed into parliament with just over 5%.

At a celebratory rally at United Russia’s headquarters broadcast on state television, Moscow Mayor Sergei Sobyanin, an ally of the Russian leader, shouted “Putin! Putin! Putin!” to a flag-waving crowd that echoed his chant.

Golos, an election watchdog accused by authorities of being a foreign agent, recorded thousands of violations, including threats against observers and ballot stuffing, blatant examples of which circulated on social media. Some individuals were shown on camera appearing to deposit bundles of votes in urns.

One Moscow pensioner who gave his name only as Anatoly said he voted United Russia because he was proud of Putin’s efforts to restore what he sees as Russia’s rightful great-power status.

“Countries like the United States and Britain more or less respect us now like they respected the Soviet Union in the 1960s and 70s. … The Anglo-Saxons only understand the language of force,” he said.

With official turnout reported to be around 52%, there were signs of apathy.

“I don’t see the point in voting,” said one Moscow hairdresser who gave her name as Irina. “It’s all been decided for us anyway.”