Russia accuses ex-reporter of being paid $248 for treason 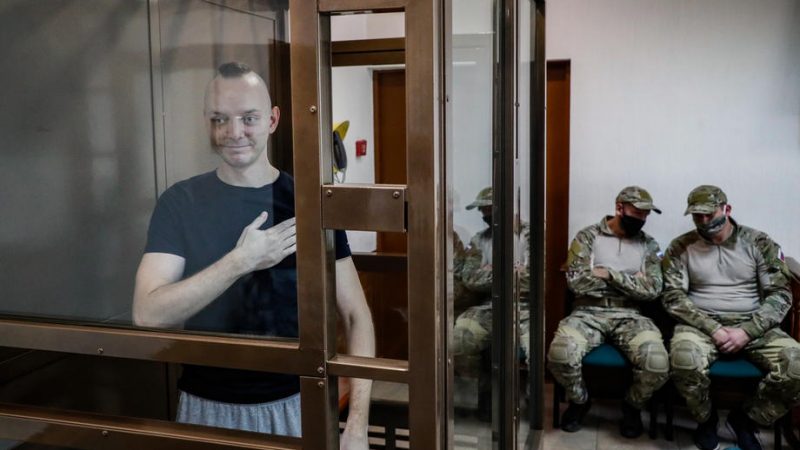 Ivan Safronov (L), an advisor to the head of the Russian State Space Corporation ROSCOSMOS, gestures as he stands in a defendant's cage prior to a hearing of an appeal against extending his arrest at the Moscow city court in Moscow, Russia, 15 September 2020. Ivan Safronov, a former journalist for the Kommersant and then Vedomosti newspapers, was detained in Moscow on 07 July 2020 by the Federal Security Service (FSB) agents on suspicion of state treason. [EPA-EFE/YURI KOCHETKOV]

Russian special services have charged former journalist Ivan Safronov with selling information on Russian military operations in Syria for $248 to a political analyst who they say then passed it to German intelligence, Safronov’s lawyer said.

In a rare glimpse into the classified investigation against Safronov, lawyer Ivan Pavlov said the Syria-related charge had been added to the case against him for state treason, which his supporters say is part of a campaign to intimidate journalists.

Pavlov said the charge states that Safronov sold the information in 2015 to political analyst Demuri Voronin, who in turn passed it to Germany’s BND foreign intelligence agency and to a Swiss university.

“According to the charges, Voronin paid him compensation of $248,” the lawyer wrote on social media, saying reporters in Russia could be accused of treason just for doing their job.

Safronov, a former defence reporter who later worked as an aide to the head of Russia’s space agency, was arrested last year and faces up to 20 years in prison if found guilty. He denies wrongdoing.

Russian media reported on Monday (1 November)  that the investigation had been completed. The FSB intelligence service did not reply to a Reuters request for comment, while the BND declined to comment.

The main accusation against Safronov is that he passed military secrets to the Czech Republic in 2017 concerning Russian arms deliveries to the Middle East and Africa.

Nearly 100,000 people have signed an online petition accusing the authorities of cooking up fake proof of Safronov’s guilt under the cover of state secrecy which surrounds the case, something the Kremlin has denied.

Pavlov, one of a team of lawyers defending Safronov, fled Russia and moved to Georgia in September after coming under criminal investigation for disclosing classified information about the case.

Political analyst Voronin, who holds Russian and German citizenship, was arrested in Moscow in February on treason charges. His lawyer Maria Orlova denied these were linked to Safronov’s case, telling Reuters that Voronin did not admit guilt and refused to testify against himself.