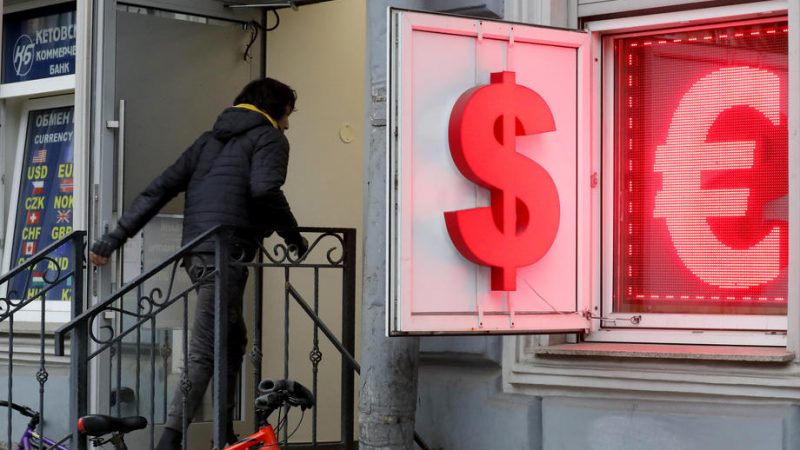 A Russian man enters an exchange office displaying US dollar and euro currency signs, in St. Petersburg, Russia, 2 March 2022. Russian troops entered Ukraine on 24 February prompting the country's president to declare martial law and triggering a series of severe economic sanctions imposed by Western countries on Russia, impacting on the rate of the ruble. [EPA-EFE/ANATOLY MALTSEV]

Any Russian business that wants to work with individuals or entities from its “unfriendly countries” list will require government approval, Moscow said on Tuesday (8 March) following the publication of the list on Saturday.

From the Western Balkans, Albania, Montenegro, and North Macedonia are included, but not Serbia, an EU candidate country that has refused to enforce sanctions against Russia and continues to nurture friendly ties.

With respect to the states formally designated as enemy, Russia will only settle any debts with entities from these countries in rubles. Furthermore, any corporate deals will require approval from a Russian government commission.

The ruble is a currency that is losing its value at tremendous speed due to Western sanctions. On Tuesday, the US dollar traded at 155 rubles, up from around 80 rubles as of the end of February.

Reportedly, the debtor may ask a Russian bank to create a special account in rubles in the name of the foreign creditor and send a payment in Russian currency for the amount due at the exchange rate on a respective day. This measure will be applied to payments above 10 million rubles per month ($65,000).

This is the second Russian response to the unprecedented sanctions imposed on the West following its invasion of Ukraine on 24 February. The first was banning certain country’s aircraft from its skies after much of the EU took the step first.

Western allies’ sanctions against Russia have started to blow back in the form of significant potential losses for their own banks, companies and investors, often in unexpected ways, Reuters reported on Tuesday.

From Societe Generale SA and BP Plc in Europe to Citigroup Inc in the United States, Western companies have tallied up billions of dollars in exposure to Russia, money they could lose. By one major US bank’s estimate, the West’s exposure through its companies and its dealings with the Russian central bank could be around $400 billion.

Korean companies engaged in business with Russia have already expressed concerns over the plummeting value of the ruble. South Korea said on Monday it would ban transactions with Russia’s central bank.