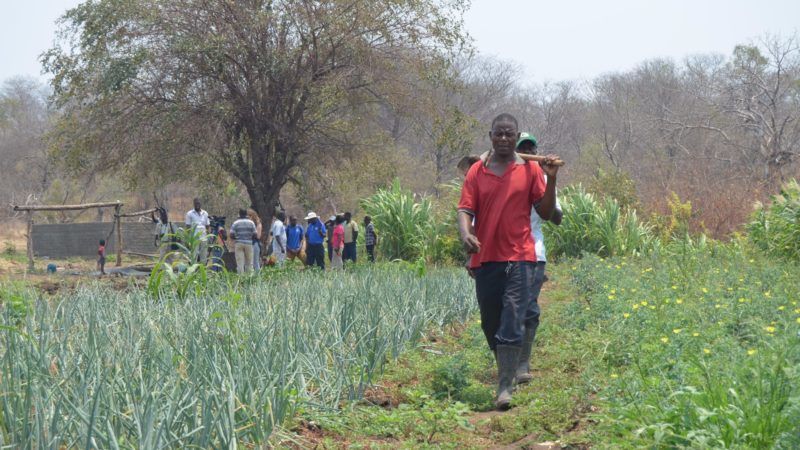 Achieving zero hunger will soon be a reality in Mozambique. [@wfp_mozambique Twitter]

An innovative debt-swap initiative between the two countries has unlocked a commitment of US$40 million, which will be used by the United Nations World Food Programme (WFP) to support the government of Mozambique to provide school meals for 150,000 children in the African country over the next five years.

In addition to providing debt relief for Mozambique, the initiative will free up new resources for development and support expansion of the Programa Nacional de Alimentação Escolar (National School Feeding Programme), which seeks to provide school meals to all primary schools in Mozambique.

#mappingZeroHunger: Check out this map showing how different activities advance #SDGs under the new @WFP strategic plan for #Mozambique! pic.twitter.com/oE0ne9xotR

WFP is the world’s largest humanitarian agency fighting hunger worldwide, delivering food assistance in emergencies and working with communities to improve nutrition and build resilience. Each year, WFP assists some 80 million people in around 80 countries.

“We are grateful to Russia and Mozambique for their willingness to embrace new financing methods that promote government ownership and strengthen important programmes, and we encourage other government donor partners to look to these new methods that can help achieve the Sustainable Development Goals.”

Despite Mozambique achieving its Millennium Development Goal of halving the number of hungry people in the country, nearly a quarter of its population face chronic food insecurity or malnourishment. Under the Mozambique Country Strategic Plan (2017-2021), WFP and its partners will work to ensure that children in chronically food-insecure areas have access to nutritious food throughout the year.

How much do you know about the new @WFP Country Strategic Plan in #Mozambique? Check out this infographic for a quick catch up! #ZeroHunger pic.twitter.com/lK4jtofcKs

Russia is by no means a big development donor. In the G8 group (which meets without Russia in a G7 format since the annexation of Crimea by Moscow), Russia accounts for a tiny fraction of the development aid the other major countries provide.

Leaders of the Group of Eight (G8) countries are meeting in Lough Erne, Northern Ireland, on 17-18 June, under the group’s UK presidency.

At the same time, Russia has well-developed relations with Mozambique, which date back to the 1960s, when Moscow began supporting the struggle of Mozambique’s Marxist-oriented FRELIMO party against Portuguese colonialism. Most FRELIMO leaders were trained in Moscow. Diplomatic relations were formally established on 25 June 1975, soon after Mozambique gained independence from Portugal, and economic and defence relations developed further.

This, however, began to change in 1984 when Mozambique joined the World Bank and the International Monetary Fund. Western aid by Sweden, Norway, Denmark and Iceland quickly replaced Soviet support. Finland and the Netherlands are becoming increasingly important sources of development assistance. Italy also maintains a profile in Mozambique as a result of its key role during the peace process.

Emb of #Finland in #Mozambique thanks the MPs & other Finnish decision-makers for visit & good discussions on development @Ulkoministerio pic.twitter.com/HzE4zcnldN

Relations with Portugal, the former colonial power, continue to be important because Portuguese investors play a visible role in Mozambique’s economy.

Mozambique sits on vast gas reserves and with good governance could achieve a quantum leap in living standards of its population.