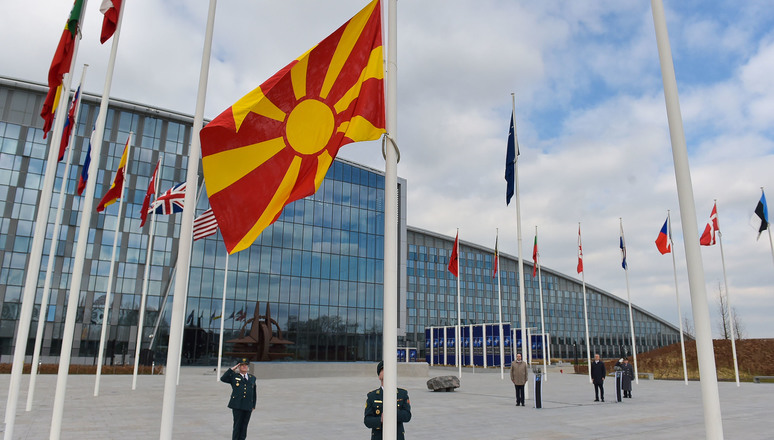 North Macedonia became NATO’s 30th member on 27 March, following the completion of the ratification procedure, in another blow to Moscow’s hope of maintaining its influence in the Western Balkans, where Montenegro and Albania have already joined the alliance.

The country’s flag was raised at the NATO headquarters in Brussels in a low-key ceremony, due to the coronavirus pandemic. The international press paid little attention to the event.

Russia appeared to capitalise on this, highlighting the lack of pomp, compared to the previous NATO enlargements. Also, the Russian foreign office made ironic comments about the statements by North Macedonia’s foreign minister.

“Despite the emergency [situation] in North Macedonia, its leaders still took time out to rhapsodise on the historic nature of the country’s accession to NATO, which supposedly will ensure stability and security of Skopje. Foreign Minister Nikola Dimitrov even called the country’s NATO membership “the testament of our fathers and grandfathers.”

“What was not mentioned, however, was how close the formal date of accession was to the anniversary of the start of NATO’s bombing of Yugoslavia”, the statement says.

NATO airstrikes against Yugoslavia lasted from 24 March 1999 to 10 June 1999. The Republic of Macedonia was already an independent country at that time but suffered indirectly because of the influx of many Kosovar refugees.

Unlike Belgrade, which has declared it would never become a member of NATO, Skopje has been steadily seeking NATO membership. The main obstacle was the veto from neighbouring Greece, prompted by the dispute over the country’s name, which was solved with the Prespa agreement of 12 June 2018.

Russia also capitalised on what it considers legal irregularities in the way the Prespa agreement was ratified, and in particular, the low turnout for the referendum held in North Macedonia on 30 September 2018.

“According to national law, turnout for the referendum on EU and NATO membership on 30 September 2018 was too low for the result to be valid. Various cases of interference in North Macedonia’s domestic affairs, even blackmail and intimidation, became known to the public. All of this went unnoticed by our Western partners, who are usually such sticklers for detail when it comes to legislative procedure.”

Russia further argued that adding a weak country such as North Macedonia hardly improves the Alliance’s strength, and suggests that the value of its membership is also doubtful.

“It is evident that Skopje’s membership in the alliance yields no added value to European, regional or national security. […] Now Skopje is required to immediately increase spending on defence and purchases of Western, primarily American, arms and equipment.”

“This is the price the Macedonian nation will have to pay for ceding its sovereignty on military-political and other matters. Regarding the promised security dividends, the alliance is not always able to reliably protect its members or even put an end to old disputes between them, instead mastering the art of sweeping such things under the rug.”

Russia has been counting on protracted ratification of Skopje’s NATO accession by member countries and on the anti-Western opposition in Macedonia itself, hoping that the nationalist VMRO-DPMNE party of former Prime Minister Nikola Gruevski would come to power and upset the NATO accession agenda.

The country was due to hold early elections on 12 April, but the poll was postponed because of the coronavirus pandemic. On 17 March, Spain became the last country to ratify North Macedonia’s accession.