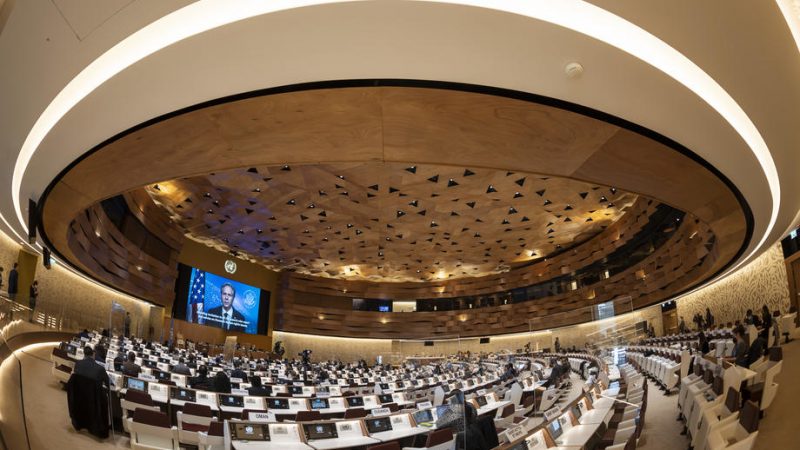 U.S. Secretary of State Antony Blinken appears on a screen as he delivers a remote speech, to the 49th session of the UN Human Rights Council, at the European headquarters of the United Nations in Geneva, Switzerland, 01 March 2022. [EPA-EFE/SALVATORE DI NOLFI]

The United Nations suspended Russia from the Human Rights Council on Thursday (7 April), as US President Joe Biden called the atrocities continuing to emerge in Ukraine an “outrage” to humanity.

The diplomatic rebuke came as the G7, the European Union and Washington further tightened the economic screws on Moscow, spurred by the horrific images emerging in recent days from now-infamous towns like Bucha and Mariupol.

“Russia’s lies are no match for the undeniable evidence of what is happening in Ukraine,” Biden said in a statement, as he hailed Moscow’s expulsion from the rights council.

“The signs of people being raped, tortured, executed — in some cases having their bodies desecrated — are an outrage to our common humanity.”

Moscow rejected its suspension, voted by the UN General Assembly, as “illegal and politically motivated.”

With the Kremlin accused of targeting civilian areas, officials said they had recovered 26 more bodies from the rubble of two destroyed apartment buildings in Borodianka, near Kyiv, where authorities were searching the ruins a week after Russian forces withdrew.

President Volodymyr Zelenskyy warned the destruction in Borodianka was “much more horrific” than in nearby Bucha — where Western nations accuse Moscow’s forces of committing war crimes.

In Ukraine’s east, desperate civilians were warned to take their “last chance” to flee — with Russian forces believed to be preparing a massive assault after withdrawing from Kyiv and Ukraine’s north.

A barrage of shells and rockets was already hammering the industrial hub Severodonetsk in the Donbas region, the easternmost city held by Ukrainian forces, leaving buildings engulfed in flames.

“Every day it’s worse and worse,” said Denis, a man in his forties with a pale, emaciated face. “They’re raining down on us from everywhere. We cannot take it anymore.”

“I want to escape this hell,” he says — but the question of where to go will have to wait: “I will think about it where there are no more shells falling around me.”

Denis fears Severodonetsk will see the same fate as the southern port of Mariupol, devastated by Russian forces in a weeks-long siege and where even pro-Russian authorities now acknowledge a staggering civilian toll.

On Thursday Mariupol’s new mayor Konstantin Ivashchenko — installed by the leader of the breakaway Donetsk region’s separatists — announced that around 5,000 civilians have been killed in the city.

The toll corroborated the low end of earlier estimates by Ukrainian officials, who said the figure could be as high as 10,000.

As Washington seeks to ramp up the economic pain on President Vladimir Putin, Congress voted Thursday to end normal trade relations with Moscow, and allow Biden to inflict steep tariff hikes on imports.

Meanwhile the prospect of a negotiated end to the war seemed to fade further as Moscow accused Kyiv of changing its demands since face-to-face talks last month.

Russian Foreign Minister Sergei Lavrov said a draft agreement presented by Ukraine suggested they were not interested in stopping the fighting.

But Ukrainian presidential adviser Mykhaylo Podolyak hit back that if Moscow wanted to show its readiness to talk, “it should lower the degree of hostility”.

Sergiy Gaiday, governor of the Donbas region of Lugansk, said more than 1,200 people had been evacuated Wednesday, but that efforts were being hampered by artillery fire, with some areas already inaccessible.

For those unable to leave, he said, tonnes of food, medicine and hygiene products were being delivered as part of a massive humanitarian effort.

Some residents were fearing the worst.

“We have nowhere to go, it’s been like this for days,” 38-year-old Volodymyr told AFP, standing opposite a burning building in Severodonetsk.

More than 11 million people have been displaced since Russia invaded on February 24, with the stated aim to “de-Nazify” and “demilitarise” Ukraine and support Moscow-backed separatists.

Moscow is believed to be trying to create a land link between occupied Crimea and the separatist-controlled Lugansk and neighbouring Donetsk regions.

“Either you help us now — and I’m speaking about days, not weeks — or your help will come too late, and many people will die, many civilians will lose their homes, many villages will be destroyed,” he said after meeting NATO foreign ministers in Brussels.

Earlier he said he had only one agenda item: “It’s weapons, weapons, and weapons.”

The Kremlin denies responsibility for any civilian deaths in Bucha — site of the most gruesome evidence of indiscriminate killings — but satellite images taken while the town was still under Russia’s control appear to show bodies in the streets.

Human rights groups say rape is also being used as a “weapon of war” in Ukraine.

Officials have alleged that Russian troops are now trying to cover up atrocities elsewhere to prevent further international outcry, including in Mariupol.

As emergency crews pulled new bodies from the rubble of two buildings in Borodianka, Ukraine’s Prosecutor General Iryna Venediktova said “only the civilian population was targeted.”

“There is no military site here,” she said on Facebook, adding it was “impossible to predict” how many more dead there may be.