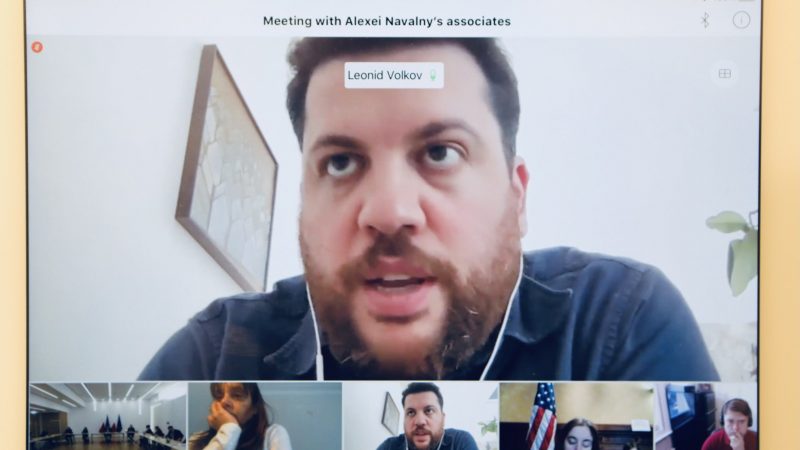 Russia has admonished the EU and Poland for organising a meeting with EU and foreign diplomats to discuss potential sanctions against Moscow with jailed opposition leader Alexei Navalny’s close associates.

Moscow would consider it morally and ethically “treasonous” that Navalny’s associates were discussing with EU and US officials the possibility of imposing sanctions on Russia, spokeswoman for the Russian Foreign Ministry, Maria Zakharova had said after the meeting took place on Monday (8 February).

“This is what our so-called Western partners are doing, thereby continuing their absolutely illegal, wrongful and aggressive offensive against us” and “a series of self-incriminating acts by the West,” Zakharova was quoted as saying by Russian News Agency TASS.

Navalny was represented by his associates Leonid Volkov, chief of staff for Alexei Navalny’s campaign for the 2018 presidential election, and Vladimir Ashurkov, the head of the non-profit  Anti-Corruption Foundation.

Volkov said on social media he discussed imposing punitive measures on Russian oligarchs closely linked to Russia’s President Vladimir Putin, but not on the national economy.

“These sanctions are in the name of and in the interests of Russia,” he wrote.

“Our goal is to identify and freeze assets consisting of tens of hundreds of billions of dollars stolen from the Russian people to then return this money to the beautiful Russia of the future,” Volkov said.

Shortly after, Russia had issued a CIS-arrest warrant, which covers a swath of other former Soviet republics, for Lithuania-exiled Volkov on Wednesday (10 February).

“NATO gave instructions to the ‘opposition’ members – who are actually their agents of influence – on how they should be more cunning in their future subversive activities,” Zakharova wrote a day later on Facebook.

The European Commission marked Zakharova’s comments as “inconsistent with the facts” and constituting “mere disinformation”, in response to a question by Polish News Agency (PAP).

“As EU, we are consulting the relevant entities to draw consequences of the illegal detention and conviction of Alexei Navalny by Russia, the arbitrary detention of demonstrators and the continued inability of the Russian authorities to investigate the poisoning attempt of Navalny in Russia with a chemical,” EU’s chief spokesperson for foreign affairs, Peter Stano, told PAP.

Russia has so far dismissed European calls to free Navalny despite the risk of new sanctions and had expelled three diplomats from Germany, Poland and Sweden for allegedly attending the rallies last weekend, provoking tit-for-tat expulsions by Berlin, Warsaw and Stockholm.

He is set to debrief EU foreign ministers on 22 February, while EU leaders are scheduled to discuss their strained ties with Russia during a March summit.