Russia leaves Council of Europe, avoiding being kicked out 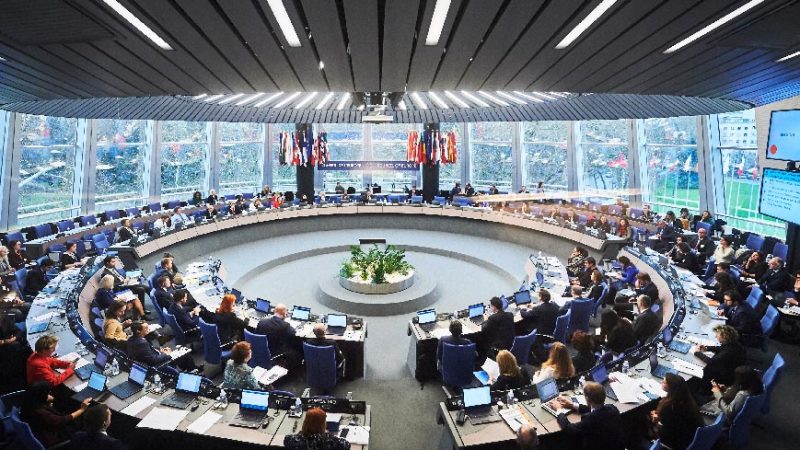 The Council of Europe plenary hall. [Website of CoE]

Russia announced it would no longer participate in the Council of Europe (CoE), days after the pan-European human rights body suspended Moscow’s rights of representation following the invasion of Ukraine.

The Ministry of Foreign Affairs statement was published by the state-owned TASS news agency on Thursday (10 March) and accused NATO and EU countries of “undermining” the European body.

“Russia does not intend to put up with these subversive actions carried out by the collective West in line with the imposition of a ‘rules-based order’ to replace international law trampled by the United States and its satellites,” said the Russian Foreign Ministry.

“Russia will not participate in the transformation by NATO and the EU obediently following them of the oldest European organisation into another platform for incantations about Western superiority and narcissism. Let them enjoy communicating with each other, without Russia.”

The Russian move is likely a preemptive action to avoid a vote in which Moscow could suffer a humiliating expulsion as most members vehemently oppose the ongoing attack of Ukraine.

On 25 February, the day after the Russian army invasion of Ukraine, the Council of Europe suspended Russia’s rights of representation by a vote in which only Russia and Armenia voted in favour, while the representatives of Serbia and Azerbaijan did not attend.

However, this decision did not exclude Russia from the Council of Europe, and it remained party to relevant Council of Europe conventions, including the European Convention on Human Rights.

At the time, the Council of Europe stated that “it leaves communication channels open”, and the judge tasked with dealing with the Russian Federation in the European Court of Human Rights would continue dealing with cases issued against the country.

“Suspension is not a final measure but a temporary one”, the Strasbourg body said on 25 February.

In the meantime, Russia’s stay in the CoE became untenable in light of the atrocities committed by its army in Ukraine. On Wednesday, Russian forces bombed a maternity hospital in Mariupol, killing at least three, including a child.

On Wednesday, CoE representatives said they “condemn in the strongest possible terms the Russian Federation’s unprovoked aggression against Ukraine, an unjustified military attack of one member State of the Council of Europe against another Member State. We reiterate our unwavering support for the independence, sovereignty and territorial integrity of Ukraine within its internationally recognised borders.”

Facing overwhelming condemnation from almost all other members was likely too much for Moscow. Furthermore, on Saturday, 5 March, Russia issued a list of “unfriendly” countries, including many fellow members of CoE.

Meanwhile, Dmitry Medvedev, the Deputy Chairman of the Security Council of Russia, stated that the country’s departure from the human rights body would allow Russia to reintroduce the death penalty.