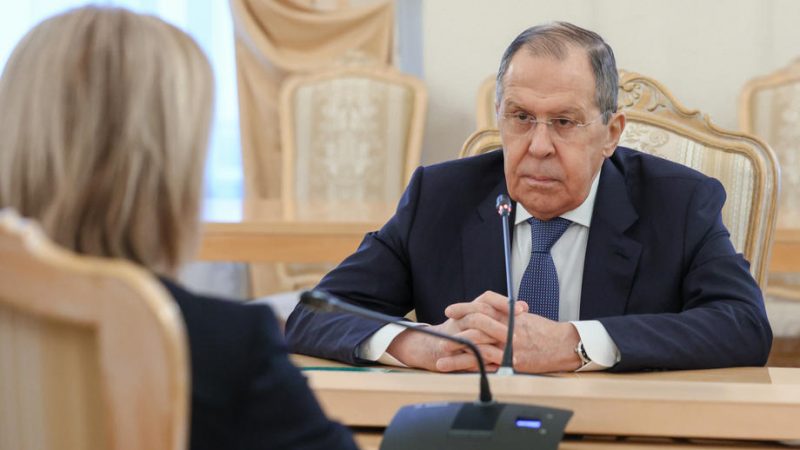 Russia’s foreign minister accused his British counterpart on Thursday (10 February) of grandstanding and refusing to listen, at a rancorous encounter that highlighted the gulf between them over the Ukraine crisis.

Sergei Lavrov told a joint news conference with Britain’s Liz Truss that their meeting had felt like a conversation between mute and deaf people.

“They say Russia is waiting until the ground freezes like a stone so its tanks can easily cross into Ukrainian territory,” he said. “I think the ground was like that today with our British colleagues, from which numerous facts that we produced bounced off.”

Truss challenged Lavrov directly over his assertion that Russia is not threatening anyone with its build-up of troops and weaponry near Ukraine’s borders.

“I can’t see any other reason for having 100,000 troops stationed on the border, apart from to threaten Ukraine. And if Russia is serious about diplomacy, they need to remove those troops and desist from the threats,” she said.

Lavrov said it was regrettable that Russia was being asked to withdraw troops from its own territory.

Russia’s Kommersant newspaper quoted two diplomatic sources as saying that during their earlier closed-door meeting Lavrov had asked Truss if she recognised Russian sovereignty over Rostov and Voronezh – two regions in the south of the country where Russia has been building up its forces.

Kommersant said Truss replied that Britain would never recognise them as Russian, and had to be corrected by her ambassador.

In a later interview with another Russian paper, RBC, Truss said she had mistakenly thought Lavrov was referring to areas of Ukraine.

Russia has presented the West with a series of demands to guarantee its security, complaining it feels threatened by repeated waves of NATO enlargement and the refusal of the alliance to rule out membership for its neighbour Ukraine, a fellow former Soviet republic.

“No one is undermining Russia’s security – that is simply not true,” Truss said, adding that it was “perfectly proper” for Ukraine to defend itself and seek alliances.

Russia and Britain have had dire relations for years, hitting low points with the fatal 2006 poisoning of former Russian security officer Alexander Litvinenko in London and the attempted killing of former Russian double agent Sergei Skripal and his daughter with a nerve agent in the English city of Salisbury in 2018.

Lavrov said London had never presented any facts to support its accusations of Russian involvement in both cases, or in the attempted poisoning of Kremlin critic Alexei Navalny in 2020.

He said Truss had not varied her tone throughout their two-hour meeting, and had ignored his explanations while repeating statements and demands that Britain had made before.