Russia said on Wednesday (16 September) that talk of possible sanctions over the case of Alexei Navalny was affecting its plans to borrow money on international markets, acknowledging the risk of harmful economic fallout from his poisoning.

Finance Minister Anton Siluanov said Moscow was waiting for an opportunity to tap the Eurobond market, but would not do so with the threat of sanctions hanging over it.

“All these restrictions, sanctions and hype around Navalny do not give us confidence in a good placement,” he said.

Moscow is looking for extra sources of funding to make up a budget shortfall caused by lower oil prices and the COVID-19 pandemic, so any delay is potentially problematic. It last raised $2.5 billion in June 2019 through dollar-denominated Eurobonds.

Navalny, the most prominent opponent of President Vladimir Putin, fell violently ill and collapsed last month while travelling from Siberia to Moscow. He was airlifted to a Berlin hospital, where doctors found he had been poisoned with a Novichok nerve agent.

Germany says laboratories in three countries have established the presence of Novichok, and demanded an explanation from Moscow. Russia says it has yet to see evidence.

British Foreign Minister Dominic Raab said during a visit to Washington: “From the UK’s point of view, (it’s) very difficult to see any plausible alternative explanation to this being carried out by the Russian intelligence services, but certainly the Russian government has a case to answer.”

Kremlin spokesman Dmitry Peskov, asked about possible repercussions for the Nord Stream 2 pipeline due to bring Russian gas to Germany, said it was wrong to link that to the Navalny case. German Chancellor Angela Merkel has faced calls to halt the project, which is more than 90% complete and scheduled to operate from early 2021. 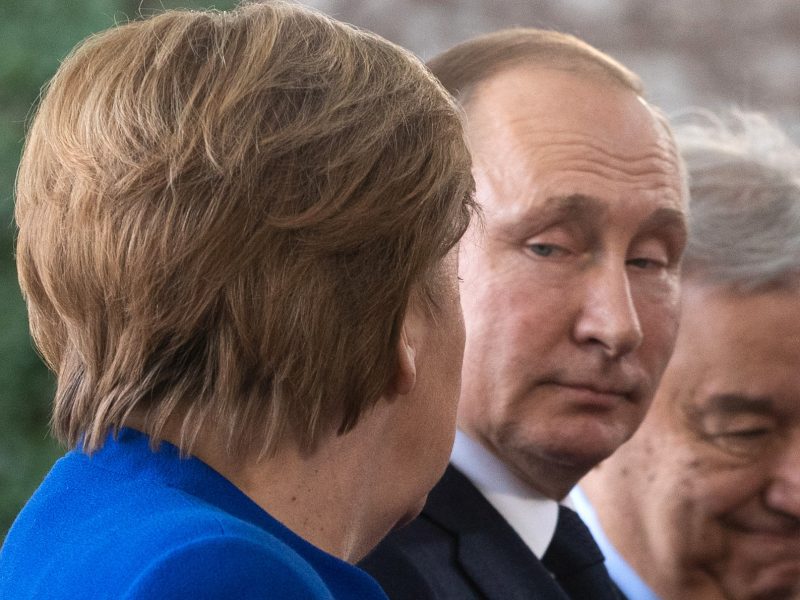 “This is a commercial project that is absolutely in line with the interests of both Russia and European Union countries, and primarily Germany,” Peskov said.

Allies of Navalny reacted with scorn to comments by Russia that it would have made no sense for Moscow to poison an opponent whose popularity rating was so low.

Russia’s permanent mission to the European Union said there would be no reason for Russia to poison Navalny with a military-grade nerve agent and then allow him to travel to Germany where the substance could be detected.

It added: “What would be the reason for the Russian authorities to poison Alexei Navalny, taking into account that his actual popularity level hardly reaches 2%?”

Navalny’s chief of staff Leonid Volkov responded on his Telegram social media channel: “It’s as if they’re saying ‘If his rating was 20%, then we would have poisoned him.”

Navalny spokeswoman Kira Yarmysh said results of regional elections at the weekend, in which candidates backed by Navalny gained seats in two Siberian cities, showed his support among Russians was much higher.

Navalny, who spent several weeks in a coma, on Tuesday shared a photograph showing him sitting up in his Berlin hospital bed, surrounded by his family. He said he could now breathe independently.

Opposition politician Dmitry Gudkov told Reuters he knew from Navalny’s team that his recovery would be lengthy.

“Great news that he will be back,” Gudkov said. “And Navalny will return to the country as a different Navalny, a world famous politician, and this will help all of us fight this regime.”