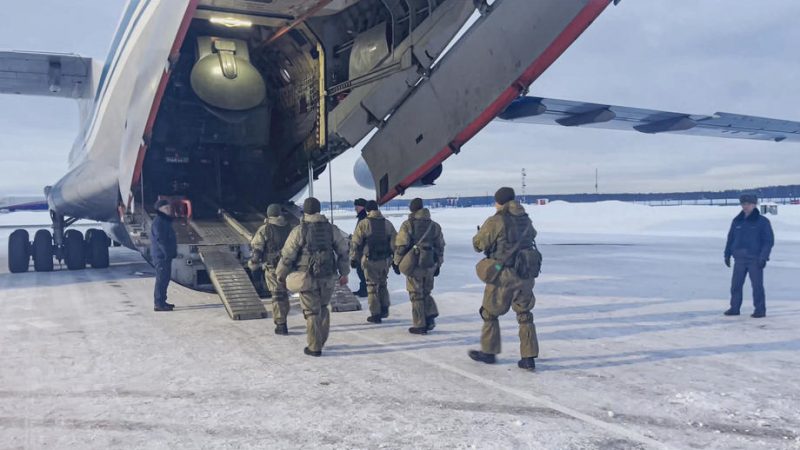 Police said they had killed dozens of rioters in the city of Almaty. State television said 13 members of the security forces had died, including two who had been decapitated.

Reuters journalists in Almaty said a presidential residence and the mayor’s office were ablaze. By Thursday afternoon, the city’s airport, seized earlier by protesters, was under the firm control of military personnel. Burnt out cars littered the streets.

Several armoured personnel carriers and scores of troops had entered the main square of Almaty on Thursday morning, and gunshots could be heard as troops approached the crowd, Reuters correspondents reported from the scene.

Later on Thursday, the square appeared peaceful, with 200-300 protesters still gathered and no troops around.

Internet had been shut down across the country, and the full extent of the violence was impossible to confirm. But the unrest was unprecedented for Kazakhstan, ruled firmly since Soviet times by leader Nursultan Nazarbayev, 81, who had held on to the reins despite stepping down three years ago as president.

Wow, wow. The statue to Kazakhstan’s first president and until a few hours ago head of the Security Council Nazarbayev is seemingly down in Almaty region. pic.twitter.com/aetzwdNQqf

Images posted on Twitter appeared to show that the former president’s statue was toppled in Almaty.

“Attack on our citizens”

Nazarbayev’s hand-picked successor, President Kassym-Jomart Tokayev, called in forces from ally Russia overnight as part of a Moscow-led military alliance of ex-Soviet states. He blamed the unrest on foreign-trained terrorists who had seized buildings and weapons.

“It is an undermining of the integrity of the state, and most importantly it, is an attack on our citizens who are asking me… to help them urgently,” he said.

The secretariat of the Russian-led Collective Security Treaty Organisation said troops being sent included units from Russia, Belarus, Armenia, Tajikistan and Kyrgyzstan. It did not disclose the overall size of the force.

Meanwhile, the first plane with Russian troops has already arrived in Almaty. Within hours, they will be deployed in the city. pic.twitter.com/7dMovqc57m

Russian paratroopers were being transferred to Kazakhstan and “the advanced units of its contingent have already begun to fulfil their assigned tasks”.

The uprising began as protests against a New Year’s Day fuel price hike, which had swelled dramatically on Wednesday when the protesters stormed and torched public buildings. They chanted slogans against Nazarbayev, and in at least one case, looped ropes around a bronze statue of him, trying to pull it down.

Tokayev initially responded by dismissing his cabinet, reversing the fuel price rise and distancing himself from his predecessor. He also announced he was taking over a powerful security post Nazarbayev had retained.

But the actions appeared insufficient to mollify crowds who accused the authorities of amassing enormous wealth in oil and minerals while the nation of 19 million mainly remained poor.

Nazarbayev stepped down in 2019 as the last Soviet-era Communist Party boss still ruling a former Soviet state. But he and his family retained control, keeping key posts overseeing security forces and the political apparatus in Nur-Sultan, the purpose-built capital bearing his name. He has not been seen or heard from since the unrest began.

Tokayev described the protesters as terrorists with foreign training, although he provided no evidence. State television on Thursday showed an unconfirmed video of a pile of weapons on the street, with people walking up and taking them.

TASS news agency quoted the Kazakh health ministry as saying more than 1,000 people had been injured during the protests, and more than 400 of them were in hospital. 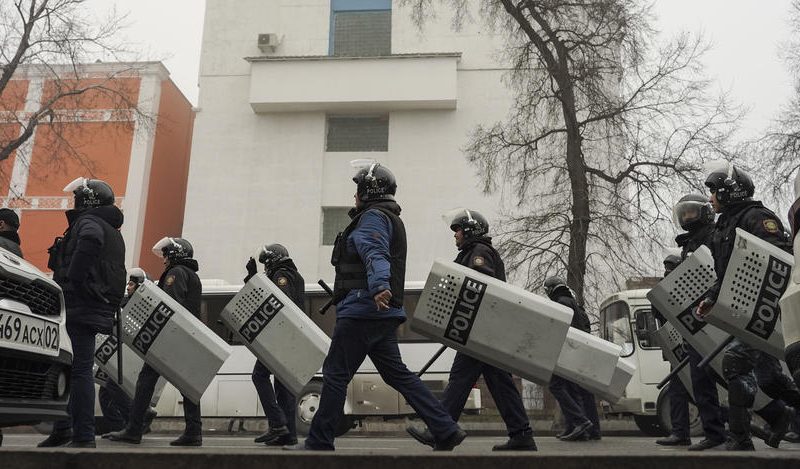 Authorities in Kazakhstan declared a nationwide state of emergency and promised a tough crackdown on Wednesday (5 January) as mass unrest plunged the country into chaos.

Western countries have called for calm. Neighbour China described the events as an internal matter for Kazakhstan and hoped the situation would stabilise soon.

The unrest began as protests against the rising price of liquefied petroleum gas, a fuel used by the poor to power their cars. But it quickly spread into broader anti-government riots, feeding off deep-seated resentment over three decades of rule by Nazarbayev and his successor.

Tokayev ordered government protection for foreign embassies and businesses owned by foreign companies. The country’s reputation for stability had helped attract hundreds of billions of dollars of foreign investment in oil and metals industries.

Earlier on Thursday, the EU External Action Service (EEAS) said it was closely following the situation and encouraged “a peaceful resolution of the situation through inclusive dialogue with all stakeholders and the respect for the fundamental rights of citizens.”

The chairman in office of the Organization for Security and Co-operation in Europe (OSCE), Polish lawyer Zbigniew Rau, sated that “violence is never an appropriate response for resolving tensions”.

“This is why I call for a peaceful return to order and respect for democratic processes, while rights and freedoms, including freedom of assembly and freedom of expression, must be protected”, Rau stated, calling for “de-escalation of the situation and engaging in dialogue by all sides”.

Kazakh President Kassym-Jomart Tokayev accepted the government’s resignation on Wednesday (5 January), his office said, after a fuel price increase in the oil-rich Central Asian country triggered protests in which nearly 100 police were injured.