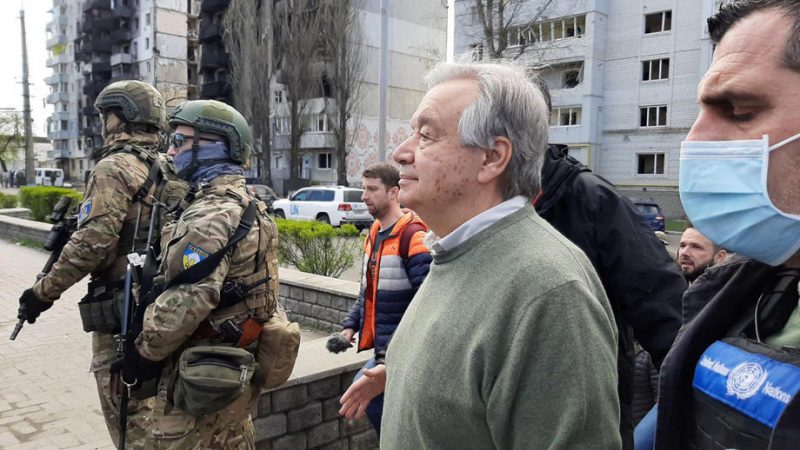 UN Secretary-General Antonio Guterres looks on during his visit to Borodyanka, Ukraine, 28 April 2022. Russia hit Kyiv with missiles on 28 April while Guterres was visiting. [EPA-EFE/Laurence Figa-Talamanca]

Russian forces bombarded Ukraine’s capital late Thursday (28 April) during a visit by UN Secretary-General Antonio Guterres, who decried the “absurdity” of war in the 21st century, as US President Joe Biden asked for $33 billion more to support Kyiv.

At least three people were wounded in the strikes in the western part of the city, which were the first in the capital in nearly two weeks, and came after Guterres toured Bucha and other suburbs where Moscow is alleged to have committed war crimes.

Ukrainian prosecutors said they were investigating 10 Russian soldiers for suspected atrocities in Bucha, where dozens of bodies in civilian clothes were found after Moscow’s retreat, and had identified more than 8,000 alleged war crimes cases.

In Washington, Biden urged US lawmakers to approve his huge aid package, as well as proposed new laws to allow using luxury assets stripped from Russian oligarchs to compensate Ukraine for damage inflicted since Moscow invaded on 24 February.

“The cost of this fight is not cheap. But caving to aggression is going to be more costly if we allow it to happen,” Biden said.

In a residential part of Kyiv, AFP correspondents saw one building in flames and black smoke pouring into the air.

“I heard the sound of two rockets and two explosions. It was a sound similar to a flying plane, and then two explosions with an interval of three to four seconds,” Oleksandr Stroganov, 34, told AFP.

Mayor Vitali Klitschko said there had been “two hits in the Shevchenkovsky district”, with one hitting “the lower floors of a residential building”. Three people were taken to hospital, but the extent of their injuries was not immediately clear.

“It is a war zone but it is shocking that it happened close to us,” Saviano Abreu, spokesman for the UN’s humanitarian office who was travelling with Guterres, told AFP, adding that the delegation was safe.

Zelenskyy said the strikes, immediately after his talks with Guterres, were an attempt by Russia “to humiliate the UN and everything that the organisation represents.”

In its economic standoff with the West, Russia on Wednesday cut gas supplies to Bulgaria and Poland, both European Union and NATO members. Both are now receiving gas from EU neighbours.

On Thursday, Petkov urged Europe to be “stronger” and wean itself off Russian gas as he also visited Ukraine, arguing “everybody in Europe should be able to”. 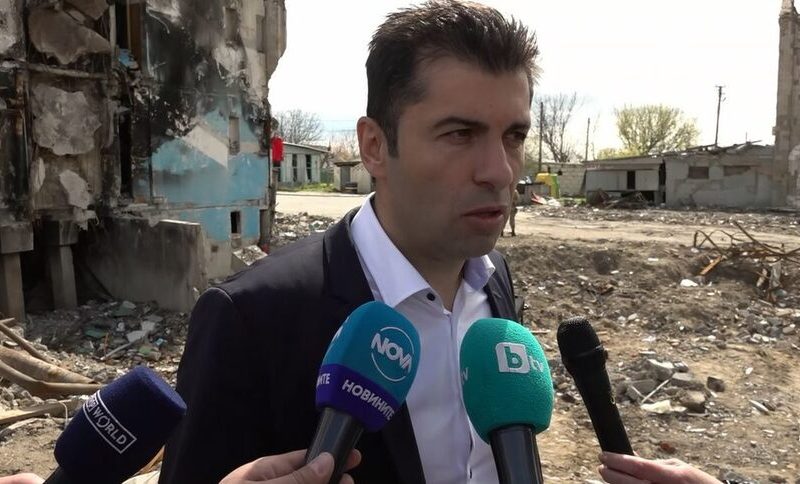 Bulgaria’s Prime Minister Kiril Petkov urged Europe on Thursday (28 April) to be “stronger” and find alternatives to Russian gas, during a visit to Ukraine.

A Russian military spokesman told reporters that Moscow’s army had conducted air strikes against 38 military targets, destroying seven munitions depots, but made no immediate mention of Kyiv or the wider region around the capital.

Guterres, who arrived in Kyiv after talks in Moscow with Russian President Vladimir Putin, called the war “evil” after visiting Bucha and demanded that the Kremlin cooperate with an International Criminal Court investigation into the accusations.

Prosecutors said the 10 servicemen under investigation are suspected of “premeditated murder”, cruel treatment and other violations of the laws and customs of war during their occupation of Bucha, northwest of Kyiv, in March.

At a joint press conference with Zelenskyy, Guterres admitted the UN Security Council had “failed to do everything in its power to prevent and end this war.”

“This is the source of great disappointment, frustration and anger”, he added.

In Washington, Biden pushed back against increasingly heated claims by Russian officials and state media that Moscow is fighting the entire West, rather than only Ukraine.

“We’re not attacking Russia. We are helping Ukraine defend itself against Russian aggression,” Biden said.

The US leader also blasted Moscow for “idle comments” on the possible use of nuclear weapons. 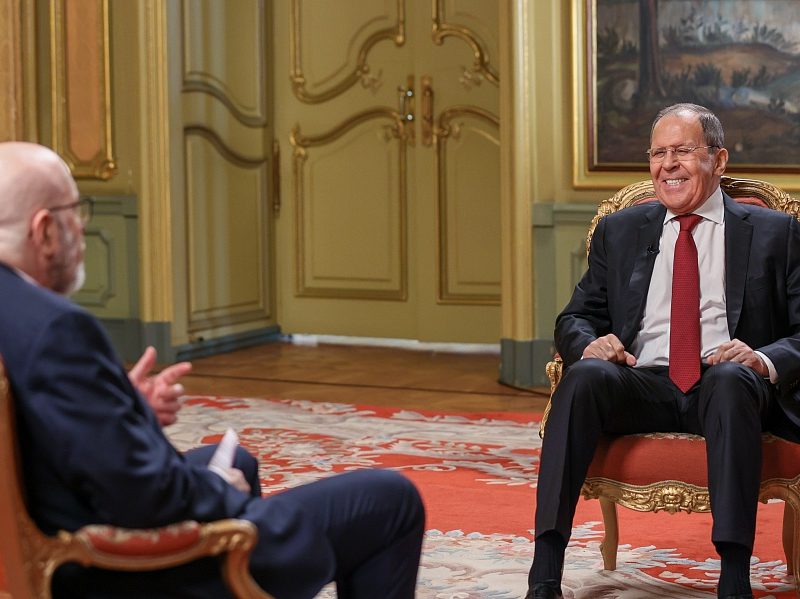 Lavrov warns 'serious' nuclear war risks should not be underestimated

Russia told the world not to underestimate the considerable risks of nuclear war that it said it wanted to reduce and warned that conventional Western weapons were legitimate targets in Ukraine, where battles raged in the east.

The $33 billion package sought by Biden is a significant increase on previous requests.

The bulk — $20 billion — would be weapons and other security assistance, while $8.5 billion will be economic aid to help Ukraine’s government respond to the crisis.

Russia has targeted Western-supplied arms, as the United States and Europe increasingly heed Zelenskyy’s call for heavier firepower, despite their misgivings about being drawn into a conflict with Moscow.

The German parliament on Thursday voted overwhelmingly in favour of providing Kyiv with heavy weapons, a major shift in policy.

Biden said the West would not allow Russia “to use their oil and gas to avoid consequences for their aggression”.

With the war claiming thousands of lives, Kyiv has admitted Russian forces are making gains in the east, capturing a string of villages in the Donbas region.

The Russian campaign has since refocused on seizing the east and south of the country while using long-range missiles against west and central Ukraine.

Guterres said the United Nations was doing everything possible to evacuate civilians from the “apocalypse” in the besieged port city of Mariupol.

A Russian official meanwhile said Thursday that the ruble will soon be introduced in areas of Ukraine under Moscow’s control, despite Russia earlier insisting it was not seeking to occupy captured territory.

Ukraine’s ombudsman condemned the move as “act of annexation” and “gross violation” of UN Charter articles.

Nearly 5.4 million Ukrainians have fled their country since the invasion, according to the United Nations, and more than 12 million others are displaced internally.

“We feel bad, we shouldn’t be standing here,” Svitlana Gordienko, a nurse forced to relocate to the southern city of Zaporizhzhia, told AFP as she queued for food at a humanitarian hub.

“We’re left with only one hope: to return home,” added pensioner Galina Bodnya.