Speaking after a closed-door UN Security Council meeting requested by Bolivia over threats of military action in Syria by US President Donald Trump, Nebenzia said the situation was even more dangerous because Russian troops are in Syria.

“The immediate priority is to avert the danger of war,” he told reporters. “We hope there will be no point of no return.”

When asked if he was referring to a war between the United States and Russia, he said, “We cannot exclude any possibilities, unfortunately, because we saw messages that are coming from Washington. They were very bellicose.”

.@RussiaUN Amb Nebenzia: “the immediate priority is to avert the danger of war.” pic.twitter.com/grkbzd4LV6

Trump said he was holding meetings on Syria, and expected to make decisions “fairly soon.”

Worries about a confrontation between Russia, Syria’s big ally, and the West have been running high since Trump said on Wednesday that missiles “will be coming” in response to the attack in the Syrian town of Douma on 7 April, and lambasted Moscow for standing by Syrian President Bashar al-Assad.

Trump tempered those remarks on Thursday and even as he consulted allies such as Britain and France, who could join in any US-led strikes on Syria, there were signs of efforts to prevent the crisis from spiraling out of control.

“Never said when an attack on Syria would take place. Could be very soon or not so soon at all!” Trump wrote on Twitter, raising the prospect that an attack might not be as imminent as he seemed to suggest the day before.

Never said when an attack on Syria would take place. Could be very soon or not so soon at all! In any event, the United States, under my Administration, has done a great job of ridding the region of ISIS. Where is our “Thank you America?”

Trump met his national security team on the situation in Syria later in the day and “no final decision has been made,” the White House said in a statement.

“We are continuing to assess intelligence and are engaged in conversations with our partners and allies,” it said.

Trump spoke to British Prime Minister Theresa May on Thursday and the two leaders talked about the “need for a joint response to Syria’s use of chemical weapons,” the White House said.

May’s office said they agreed on the need to deter Assad’s government from further such attacks.

Trump was also due to speak with French President Emmanuel Macron, who said France had proof the Syrian government carried out the attack near Damascus, which aid groups have said killed dozens of people, and will decide whether to strike back when all the necessary information has been gathered.

“We have proof that last week … chemical weapons were used, at least with chlorine, and that they were used by the regime of Bashar al-Assad,” Macron said, without offering any details.

Two US officials familiar with an investigation of samples from Douma and the symptoms of victims said initial indications that a mix of weaponized chlorine gas and sarin were used in the attack appeared to be correct. But US intelligence agencies have not completed their assessment or reached a final conclusion, the officials said.

Russia, Syria and its other main backer, Iran, have said reports of the Douma attack were fabricated by rebels and rescue workers and have accused the United States of seeking to use it as a pretext to attack the Syrian government.

Russia said it deployed military police in Douma on Thursday after the town was taken over by government forces.

“They are the guarantors of law and order in the town,” RIA news agency quoted Russia’s defense ministry as saying.

There were signs of a global effort to head off a direct confrontation between Russia and the West. The Kremlin said a crisis communications link with the United States, created to avoid an accidental clash over Syria, was in use.

Russia called a meeting of the Security Council for Friday on Syria and has asked for UN Secretary-General António Guterres to publicly brief the body.

“A flurry of last-minute diplomacy was under way at U.N…#Russia asked for open Security Council emergency meeting on Friday morning & called for UN Secretary-Gen Guterres to brief council. Some diplomats said this was Russia’s tactic to delay US coalition strikes” in #Syria https://t.co/tSWHxW09tJ

In a bid to avoid an escalation, Sweden proposed a Security Council resolution on Thursday, seen by Reuters, that would ask Guterres to send a high-level disarmament team to Syria to address “all outstanding issues on the use of chemical weapons once and for all.”

Some UN diplomats said there was little interest among the council’s 15 member countries to pursue the proposal.

Nebenzia thanked Sweden for its efforts, but added, “Frankly in the circumstances we find ourselves now, this is not an immediate priority.”

The council failed on Tuesday to approve three draft resolutions on chemical weapons attacks in Syria. Russia vetoed a US text, while two Russian-drafted resolutions failed to get a minimum nine votes to pass.

Investigators from the Organisation for the Prohibition of Chemical Weapons are traveling to Syria to determine whether a toxic gas was used in the town of Douma, the site of the 7 April incident, and will start work on Saturday. They are not mandated to assign blame.

Syrian UN Ambassador Bashar Ja’afari told reporters on Thursday, “We’re ready to escort them to where they want, whenever they want, anytime they want.”

“Any delay or disruption in the visit will be a result of the political pressure exercised on the OPCW from a very well-known state, as the Syrian government expressed its readiness to facilitate this visit,” Ja’afari said. 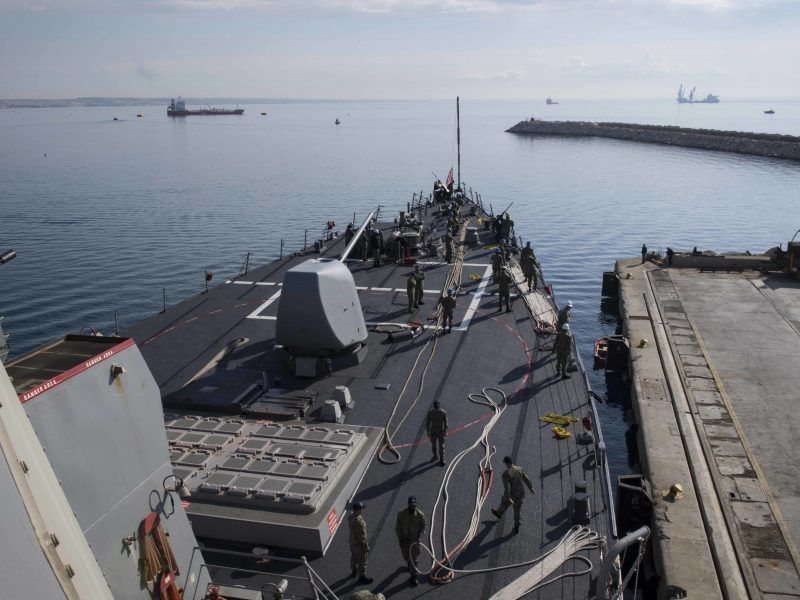 EU foreign ministers will discuss Syria and adopt conclusions at their regular meeting in Luxembourg on Monday (16 April). They will also exchange views on Russia and discuss the latest developments in the aftermath of the Salisbury attack., including the expulsion of Russian diplomats.

One response to “Russia UN envoy ‘cannot exclude’ war between Russia, US”