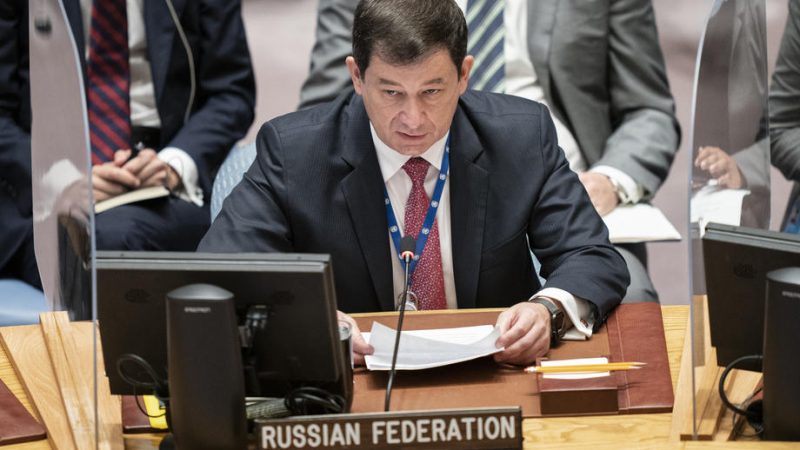 Russia traded barbs with Western members of the UN Security Council on Thursday (11 November) over a crisis on the border between Belarus and Poland, with Russia’s deputy UN envoy suggesting his European colleagues have “masochist inclinations.”

Estonia, France, Ireland, Norway, the United States and Britain raised the migrant crisis during a closed-door meeting of the 15-member body.

“We condemn the orchestrated instrumentalisation of human beings whose lives and wellbeing have been put in danger for political purposes by Belarus, with the objective of destabilizing neighboring countries and the European Union’s external border and diverting attention away from its own increasing human rights violations,” they said in a statement.

The statement made no mention of Belarus ally Russia, which before the meeting rejected western allegations that it was working in conjunction with Minsk to send the migrants over the EU’s eastern border into Poland.

They described the Belarusian approach as “unacceptable,” and accused President Alexander Lukashenko of becoming a threat to regional stability and called for a “strong international reaction” to hold Belarus accountable, pledging “to discuss further measures that we can take.”

The EU says Belarus is encouraging thousands fleeing war-torn parts of the world to try to cross into Poland and other neighboring countries to retaliate for EU sanctions.

Belarus has warned the crisis could escalate into a military confrontation, while Lithuania, Estonia and Latvia said Belarus posed a serious threat to European security.

Russia’s deputy UN Ambassador, Dmitry Polyanskiy, told reporters ahead of the council meeting that he believed his Western council colleagues “have some kind of masochist inclinations because to raise this topic, which is a total shame for the EU, in front of us would be very brave.”

#Russia’s DPR, Polyanskiy, said he suspects #Estonia & #France having masochist inclinations to raise this topic in the SC, a “shameful” act of the EU.

When asked if Russia or Belarus were helping move the migrants to the Polish border, Polyanskiy said: “No, absolutely not.” He added that not all problems needed to be tackled by the Security Council. Russia is a council veto-power so can shield Belarus from any possible attempts to impose UN sanctions.

EU is stubbornly promoting its perverted vision of the situation. At the same time NGO’s and media are not allowed to visit #polandborder to help #migrants and to report forceful deportations and harassment of unarmed people by #Poland. Where are “EU values”? #DoubleStandards https://t.co/VsFD1mPE4H

Asked about flights of Russian fighter jets over Belarus, he said this was in response to what he called a massive build up of Polish forces on the border.

Estonia, France, Ireland, Norway, the United States and Britain said: “We will remain united and determined to protect the EU against these hybrid operations by Belarusian authorities.”

Asked if the deployment of Russian forces on the border with Ukraine meant Russia planned to invade its neighbor, Polyanskiy said: “Never planned, never did, and never will do, unless we’re provoked, of course, by Ukraine or by somebody else.