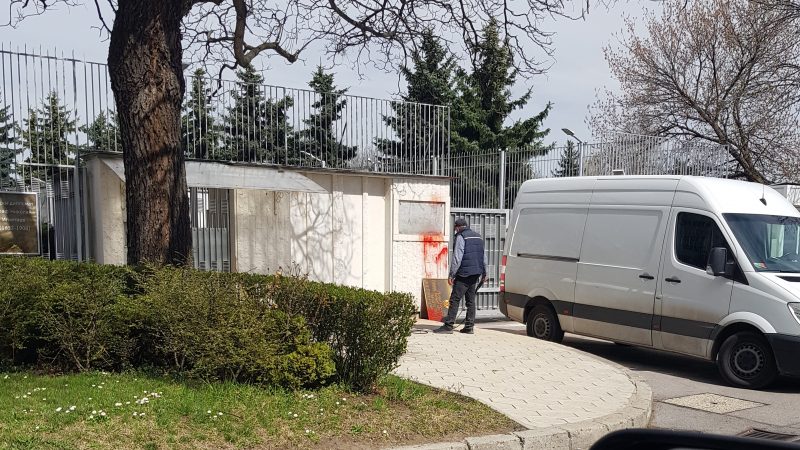 A worker photographed on 9 April 2022 tries to clean the Russian embassy plate in Sofia which was doused with red paint by protesters against the war in Ukraine the previous day. [Georgi Gotev]

Russian diplomat Sergey Andreev was feeling unwelcome on the streets of Warsaw even before protesters doused him with red liquid thrown in his face at short range this week.

Soon after Russia’s invasion of Ukraine on 24 February, Andreev, who is Moscow’s ambassador in Poland, found the embassy bank accounts had been frozen. Attempts to meet with Polish officials for any level of diplomatic discussion were impossible, he said.

“We are practically isolated,” he told Reuters, before the paint incident on Monday.

Across Europe’s capitals, Russian diplomats are getting the cold shoulder, ranging from diplomatic expulsions by governments, to protests by individual citizens, and service denials by companies.

European Union governments have expelled at least 400 Russian diplomats and support staff. Warsaw has seized a building linked to the Russian embassy, and Oslo renamed a street in front of the Russian mission “Ukraine Square.”

Russia’s 10-week bombardment of Ukraine has killed thousands, driven over a quarter of the population from their homes and flattened towns. Europeans widely see it as unprovoked aggression by President Vladimir Putin, who says what he calls a special military operation was launched to defend Russia.

The diplomats’ tribulations are not comparable to the destruction of the war or the broader Western response, but they are a conspicuous example of the depth of feeling against the invasion, and have hit home in Moscow.

Public protests have prompted Russia’s foreign ministry to warn diplomats to think twice when they venture out, after embassies were defaced by red paint in Rome, Sofia and Prague. In London, protesters piled cookware and appliances in front of Russia’s mission in April, in reference to reports of Russian looting in Ukraine.

“There are attacks, practically terrorist acts against our institutions and against the physical security of diplomats,” Russian Foreign Minister Sergei Lavrov told Rossiya 24 television.

“Now we do not recommend they go out” alone, said Lavrov, calling the anti-Russian atmosphere stoked by the West discriminatory.

In Poland, Andreev was at Warsaw’s Soviet Military Cemetery on Monday to lay flowers to mark the 77th anniversary of the victory over Nazi Germany when he was surrounded by protesters – some holding Ukrainian flags and chanting “fascists” at the Russian delegation – before a woman hurled a lumpy red liquid into his face.

Protesters opposed to the war in Ukraine threw red paint on Russia’s ambassador to Poland Sergey Andreev as he arrived at a cemetery in Warsaw to pay respects to Red Army soldiers who died during World War II. https://t.co/S2SMcPPvVx pic.twitter.com/8hgQutHGRK

The Russian foreign ministry said it had lodged a strong protest with Polish authorities, which it accused of “practically conniving” with the protesters. Speaking to Reuters in April, Andreev said Poland had breached the Vienna Convention that specifies rules for hosting diplomats. The embassy did not provide more comment after Monday’s paint protest.

The Polish foreign ministry described the incident as regrettable, saying in a statement that “diplomats enjoy special protection, regardless of the policies pursued by the governments that they represent.”

Swiss police told Reuters last month there have been “expressions of displeasure, threats and damage to property towards the Russian embassy”, and police made unspecified security adjustments. In Bucharest, a driver died ramming his car into the gate of the Russian embassy on 6 April.

As in Warsaw, the Russian embassy in Paris has been running low on cash, with Moscow instructing diplomats there to cut spending to a minimum, according to a diplomatic source from a country that has not imposed sanctions on Russia and continues to engage with the embassy. The embassy declined to comment.

In Lithuania, two main banks have or will cut money transfers to and from Russia and Belarus, and, like in Poland, insurance firms have refused to insure embassy cars.

“They are not insuring damages for the Russian embassy,” said Andrius Romanovskis, chair of Lithuanian Insurers Association. “My understanding is these decisions are not of commercial nature, but have to do with reputational and moral choices.”

The Russian embassy in Lithuania’s capital Vilnius confirmed its troubles.

“The embassy has recently been facing a number of problems in the banking and insurance sector, as well as with the fulfilment by certain companies of their obligations under existing contracts,” said press secretary Alexander Kudryavtsev.

Czech capital Prague changed the embassy’s street name to “Ukrainian Heroes’ Street” while the district where the Russian embassy is based has requested that a Russian school building, unused since the Czechs expelled dozens of Russian diplomats, be made available for Ukrainian refugee children.

The measures have led to some retaliation from an increasingly isolated Russia, which has kicked out an unspecified number of European diplomats.

The Polish Foreign Ministry said streets have been dug up around its embassy in Moscow, and the work of the embassy and its consulates was “restricted in every way by the Russian side.”

Russia’s foreign ministry did not immediately reply to a request for comment.