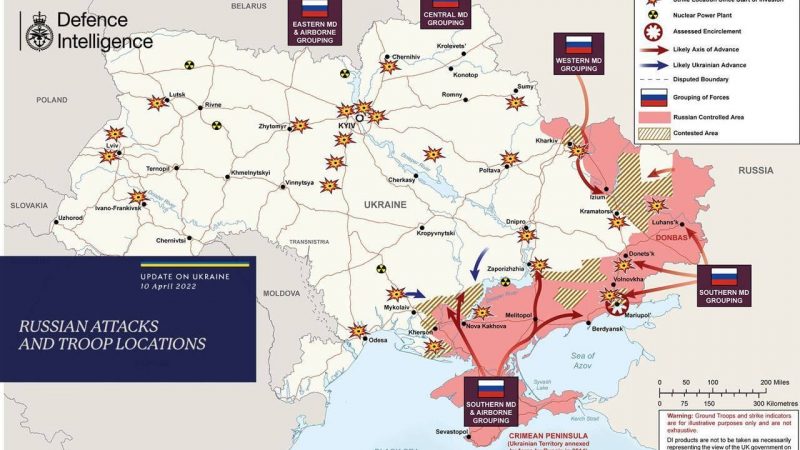 A Russian general declared on Friday (22 April) that Moscow wants to seize all of southern and eastern Ukraine, far wider war aims than it had acknowledged as it presses on with a new offensive after its campaign to capture the capital Kyiv collapsed last month.

Ukraine said the comments by Rustam Minnekayev, deputy commander of Russia’s central military district, had given the lie to Russia’s previous assertions that it has no territorial ambitions.

“They stopped hiding it,” Ukraine’s defence ministry said on Twitter. Russia had “acknowledged that the goal of the ‘second phase’ of the war is not victory over the mythical Nazis, but simply the occupation of eastern and southern Ukraine. Imperialism as it is.”

Minnekayev was quoted by Russian state news agencies as saying Moscow aimed to seize the entire eastern Donbas region, link up with the Crimea peninsula, and capture Ukraine’s entire south as far as a breakaway, Russian-occupied region of Moldova. That would mean pushing hundreds of miles beyond current lines, past the major Ukrainian cities of Mykolaiv and Odesa.

EURACTIV wrote way back in December 2021 that Russia’s hidden goals are to to launch a military operation and seize what it calls Novorossiya – leaving Ukraine as a landlocked country.

Ukraine’s general staff said Russian forces had increased attacks along the whole frontline in the east and were trying to mount an offensive in the Kharkiv region, north of Russia’s main target, the Donbas.

In Kharkiv city, Russian shellfire hit the main Barabashovo market. Ambulance services said there had been casualties but no details were available yet. A wedding hall and a residential building were also struck.

In Geneva, the United Nations human rights office said there was growing evidence of Russian war crimes in Ukraine, including indiscriminate shelling and summary executions, that had caused many civilian casualities. It said Ukraine also appeared to have used weapons with indiscriminate effects.

Russia said on Thursday it had won the war’s biggest fight – the battle for the main port of the Donbas, Mariupol – after a nearly two-month siege. President Vladimir Putin decided not to try to root out thousands of Ukrainian troops still holed up in a huge steel works there.

In a Russian-held section of the city, the guns had largely fallen silent and dazed looking residents ventured out on streets on Thursday to a background of charred apartment blocks and wrecked cars. Some carried suitcases.

Volunteers in white hazmat suits and masks roved the ruins, collecting bodies from inside apartments and loading them on to a truck marked with the letter “Z”, which has become a symbol of Russia’s invasion.

Maxar, a commercial satelite company, said images from space showed freshly dug mass graves on the city’s outskirts. Ukraine estimates tens of thousands of civilians have died in the city during Russia’s bombardment and siege.

More potential&horrific evidence of 🇷🇺 war crimes in 🇺🇦. 200 new mass graves near #Mariupol acc. to @Maxar. Up to 9⃣0⃣0⃣0⃣ Mariupol citizens may be buried in the grave in #Manhush. Int. community will hold #Russia accountable and ensure it pays for its war crimes. @IntlCrimCourt pic.twitter.com/1l1r345XfI

Kyiv says 100,000 civilians are still inside the city, and need full evacuation. It says Moscow’s decision not to storm the Azovstal steel works is proof that Russia lacks the forces to defeat the Ukrainian defenders.

The United Nations and Red Cross say the civilian toll is still unknowable but at least in the thousands. Russia says it has rescued the city from nationalists.

In Zaporizhzhia, where 79 Mariupol residents arrived in the first convoy of buses permitted by Russia to leave for other parts of Ukraine, Valentyna Andrushenko held back tears as she recalled the ordeal under siege.

“They (Russians) were bombing us from day one. They are demolishing everything. Just erase it,” she said of the city.

Kyiv said no new evacuations were planned for Friday. Moscow says it has taken 140,000 Mariupol residents to Russia; Kyiv says many of those were deported by force in what would be a war crime.

Mariupol’s mayor, Vadym Boichenko, who is no longer inside Mariupol, said: “We need only one thing – the full evacuation of the population. About 100,000 people remain in Mariupol.”

Western countries believe Putin is desperate to demonstrate a victory after the failure of his forces to capture the capital Kyiv.

In a late-night address, Ukraine’s President Volodymyr Zelenskyy said Russia was doing all it could “to talk about at least some victories”.

“They can only postpone the inevitable – the time when the invaders will have to leave our territory, including from Mariupol, a city that continues to resist Russia regardless of what the occupiers say,” Zelenskyy said.

Abandoning the effort to defeat the last Ukrainian defenders in Mariupol frees up more Russian troops for the main military effort, an assault from several directions on the towns of Kramatorsk and Sloviansk in the Donbas, to cut off the main Ukrainian military force in the east.

Minnekayev, the Russian general, described a much wider goal of linking up with Transdnistria, a Russian-occupied breakaway part of Moldova, which is on Ukraine’s southwestern border.

He said Russian speakers there were oppressed, the same justification Moscow has given for its interventions in Ukraine since 2014, which Western countries call a baseless pretext.

While Russia has withdrawn from northern Ukraine and so far made only limited headway in the east, it still occupies a swathe of southern Ukraine captured in the early days of the invasion. Ukrainian officials fear Moscow might try to organise fake independence votes to try to wrest those areas away.

British military intelligence reported heavy fighting in the east as Russian forces tried to advance on settlements, but said the Russians were suffering from losses sustained early in the war and were sending equipment back to Russia for repair.

The United States authorized another $800 million in military aid for Ukraine on Thursday, including heavy artillery and drones.