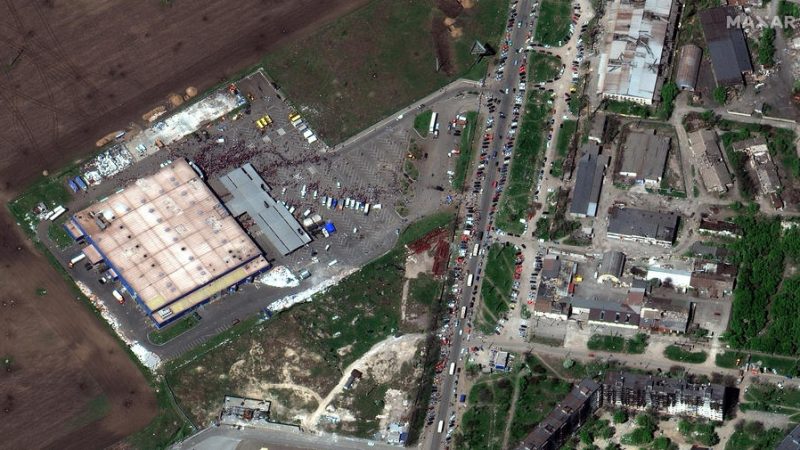 Russia pounded southern and eastern Ukraine with missile strikes on Saturday (30 April), Ukrainian officials said, while some women and children evacuated a steel plant in the besieged city of Mariupol where they had holed up for more than a week.

Moscow has turned its focus to Ukraine’s south and east after failing to capture the capital Kyiv in a nine-week assault that has flattened cities, killed thousands of civilians and forced more than 5 million to flee abroad.

Its forces have captured the town of Kherson in the south, giving them a foothold just 100 km north of Russian-annexed Crimea, and have mostly occupied Mariupol, the strategic eastern port city on the Azov Sea.

Russia declared victory in Mariupol on 21 April even as hundreds of Ukrainian troops and civilians took shelter in the Azovstal steel works.

The United Nations has urged an evacuation deal. On Saturday a Ukrainian fighter inside said some 20 women and children had made it out.

“We are getting civilians out of the rubble with ropes – it’s the elderly, women and children,” said the fighter, Sviatoslav Palamar, referring to wreckage within the plant, which sprawls across 4 sq km.

Palamar said Russia and Ukraine were respecting a local ceasefire, and he hoped the evacuated civilians would be taken to the Ukrainian city of Zaporizhzhia to the northwest.

There was no comment from Russia or the United Nations on the evacuations. Hundreds of Ukrainians remain inside the steel works, Ukrainian officials say.

A Russian missile launched from Crimea destroyed the runway at the main airport in the city of Odesa to the west, said regional governor Maksym Marchenko, but no one was hurt.

The airport could no longer be used, Ukraine’s military said. President Volodymyr Zelenskyy vowed to rebuild it, saying in a late-night video speech, “Odesa will never forget Russia’s behaviour towards it.”

There was no comment on the strike from Moscow, whose forces have sporadically targeted Ukraine’s third-largest city, where eight people were killed in a recent Russian strike, Ukrainian officials said.

Moscow’s assault in the south aims in part to link the area with Crimea as it pushes for complete control of Ukraine’s eastern Donbas region, where Russian-backed separatists already controlled parts of Luhansk and Donetsk provinces before Moscow’s 24 February invasion.

In his speech, Zelenskyy said Russia was “gathering additional forces for new attacks against our military in the east of the country” and “trying to increase pressure in the Donbas”.

Moscow calls its actions a “special operation” to disarm Ukraine and rid it of anti-Russian nationalism fomented by the West. Ukraine and the West say Russia launched an unprovoked war of aggression.

Despite weeks of peace talks, both sides looked to be as far apart as ever on Saturday.

Russian Foreign Minister Sergei Lavrov has said the lifting of sanctions imposed on Russia is part of peace talks with Ukraine, but senior Ukrainian negotiator Mykhailo Podolyak denied that this was the case.

“At present, the Russian and Ukrainian delegations are actually discussing on a daily basis via video-conferencing a draft of a possible treaty,” Lavrov said in comments to China’s official Xinhua news agency published on the Russian foreign ministry’s website on Saturday.

“The talks’ agenda … includes, among other things, the issues of denazification, the recognition of new geopolitical realities, the lifting of sanctions, the status of the Russian language,” Lavrov said, without elaborating.

But Podolyak was dismissive, saying Lavrov had not attended a single negotiating round, and that Ukraine did not need lessons in “denazification” or use of the Russian language from those who had attacked and occupied Ukrainian towns and cities.

In remarks cited by the office of President Volodymyr Zelenskiy, he said that “the issue of global international sanctions against the Russian Federation is not discussed at all” within the framework of the Russia-Ukraine negotiations.

“It is for all our partners, together with Ukraine, to decide what decisions should be taken on sanctions, and when.”

Ukraine accuses Russian troops of carrying out atrocities in areas near Kyiv in early April, a claim denied by Moscow. Negotiators last met face-to-face on 29 March and have since spoken by video link.

The United States and its European allies have imposed sweeping sanctions on Russia’s economy and supplied Ukraine with weapons and humanitarian aid.

US President Joe Biden is seeking a $33 billion aid package for Kyiv, including $20 billion for weapons. 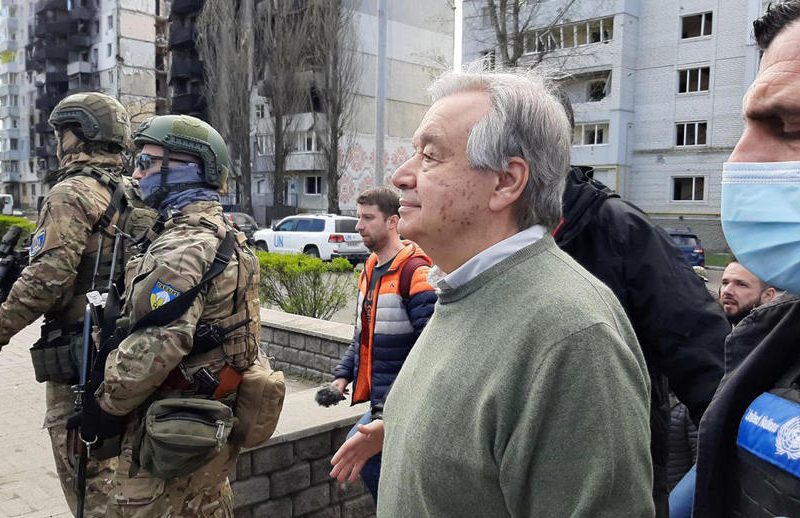 Russian forces bombarded Ukraine’s capital late Thursday (28 April) during a visit by UN Secretary-General Antonio Guterres, who decried the “absurdity” of war in the 21st century, as US President Joe Biden asked for $33 billion more to support Kyiv.

British Prime Minister Boris Johnson said on Saturday his country would continue “to give the Ukrainians the equipment they need to defend themselves”.

In the town of Dobropillia in Donetsk, the shockwave from a strike on Saturday blew in the windows of an apartment building and left a large crater in the yard.

Standing in his living room, a resident who gave only his first name, Andriy, said his partner was knocked unconscious. “Thank God the four children were in the kitchen,” he said.

People sifted belongings to salvage what they could.

“At around 9:20 a.m. this happiness flew to our house,” said another resident, Oleh, sarcastically. “Everything is destroyed.”

Officials in the Bryansk region, which borders Ukraine and Belarus, said air defences had kept out a Ukrainian aircraft, but the resulting shelling hit parts of a Russian oil terminal.

South of Bryansk, in Kursk, another border region, several shells were fired from Ukraine toward a Russian checkpoint, said the regional governor, Roman Starovoit, but with no casualties or damage.

Ukraine has not claimed responsibility for such incidents but it described a series of blasts in Russia’s south on Wednesday as payback and “karma” for Moscow’s invasion.

Hollywood actress Angelina Jolie visited the Ukrainian city of Lviv on Saturday, going to the station to meet people displaced by the war with Russia before later leaving after air-raid sirens sounded.

Jolie, 46, is a special envoy for the United Nations refugee agency, which says more than 12.7 million people have fled their homes in the past two months, which represents around 30% of Ukraine’s pre-war population.

During the visit to the station, Jolie met volunteers working with the displaced, who told her that each of the psychiatrists on duty spoke to about 15 people a day. Many of those in the station are children aged from two to 10, according to volunteers.