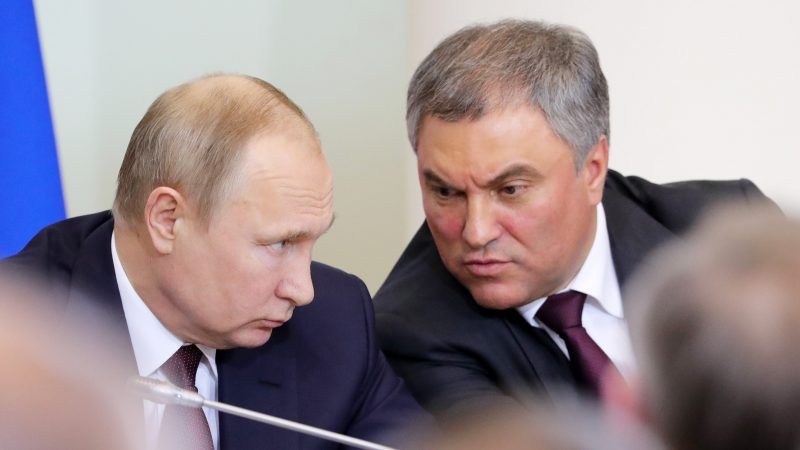 Russia’s parliament voted Thursday (17 January) against sending delegates or paying contributions to the Council of Europe, increasing the risk of ultimate exclusion from the rights body and the European Court of Human Rights.

The lower house of parliament, the State Duma, voted not to send a delegation to the council’s parliamentary assembly this year and not to pay contributions of some €30 million.

The council promotes democracy and the rule of law across Europe and includes Turkey and Ukraine as members.

Speaker Vyacheslav Volodin said MPs voted “exclusively in the interests of citizens of our country.”

Russia had already suspended part of its funding to the council after it was stripped of its voting rights in 2014 following the annexation of Crimea from Ukraine.

Russian blackmail in the Council of Europe?

The Council of Europe (CoE) could become the first European institution to lift sanctions imposed on Russia for annexing Crimea and military aggression in Eastern Ukraine. This would be a major blow to democratic values on the European continent, write Volodymyr Yermolenko and Sergiy Sydorenko.

Thursday’s vote came as the Council of Europe’s parliamentary assembly is set to hold a plenary session on Monday in Strasbourg.

“The discussions to find a solution will continue,” said Daniel Holtgen, spokesperson for the Secretary General of the Council of Europe.

Russian lawmakers released a statement saying they do not “see grounds” for sending a delegation or renewing payment of contributions.

After two years of non-payment of contributions — from June this year — Russia could be formally excluded from the council by its executive committee or could opt to leave.

Moscow suspended part of its €33 million annual contributions to the council in 2017.

Russian Foreign Minister Sergei Lavrov said at the time that payments would only be renewed after the “unconditional total restoration” of its rights.

Council of Europe delegates voted in October to delay action on a proposed rule change that could have restored Russia’s voting rights.

If Russia left the 47-member council, it would be the first such departure since the body’s creation in 1949 and would mean Russians could no longer take cases to the European Court of Human Rights (ECHR).

Russia joined the council in 1996, since when the European Court has been flooded with cases from Russia, with activists accusing the country of violating the European Convention on Human Rights.

The court has issued decisions ordering Russia to pay damages and compensation to numerous activists including opposition leader Alexei Navalny and the jailed Pussy Riot punks.

Russian lawmakers said Thursday that Russia’s lack of attendance means it has not taken part in choosing more than half the judges at the court, “which brings into question the legitimacy of the ECHR’s decisions related to Russia.”