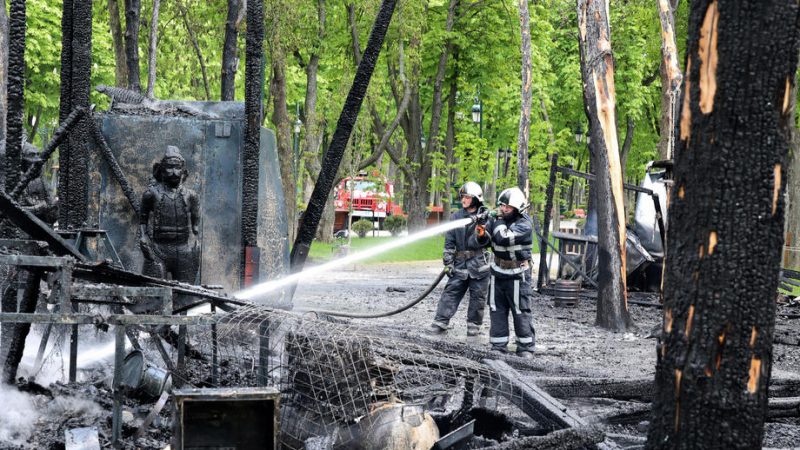 Firefighters extinguish a fire at a children's play area in Gorky Park in Kharkiv, Ukraine, 3 May 2022, after attacks in and around the city. [EPA-EFE/SERGEY KOZLOV]

Russian forces pounded targets in eastern Ukraine on Tuesday (3 May), unleashing rockets on a steel plant that is Ukraine’s last redoubt in the port city of Mariupol as the European Union prepared to slap oil sanctions on Moscow.

Scores of evacuees who did manage to leave the city under United Nations and Red Cross auspices over the weekend reached the relative safety of Ukraine-controlled Zaporizhzhia after cowering for weeks under the sprawling Azovstal steel plant.

Mariupol is a major target for Russia as is seeks to cut Ukraine off from the Black Sea and connect Russian-controlled territory in the south and east. Parts of the eastern regions of Donetsk and Luhansk were held by Russian-backed separatists before President Vladimir Putin launched the 24 February invasion.

Fresh Russian attacks in Donetsk on Tuesday killed 21 civilians and injured 27, regional governor Pavlo Kyrylenko said. He said the figure was the highest daily death toll in the region since last month.

Attacks and shelling also intensified in Luhansk, with the most difficult area being Popasna, where it was impossible to organize evacuations, regional governor Serhiy Haida said.

“There are no safe cities in Luhansk region,” he said on Telegram.

Russia’s defense ministry said its forces had struck a military airfield near the Black Sea port of Odesa with missiles destroying drones, missiles and ammunition supplied to Ukraine by the United States and its European allies. Ukraine said three missiles targeted the Odesa region and all were intercepted. 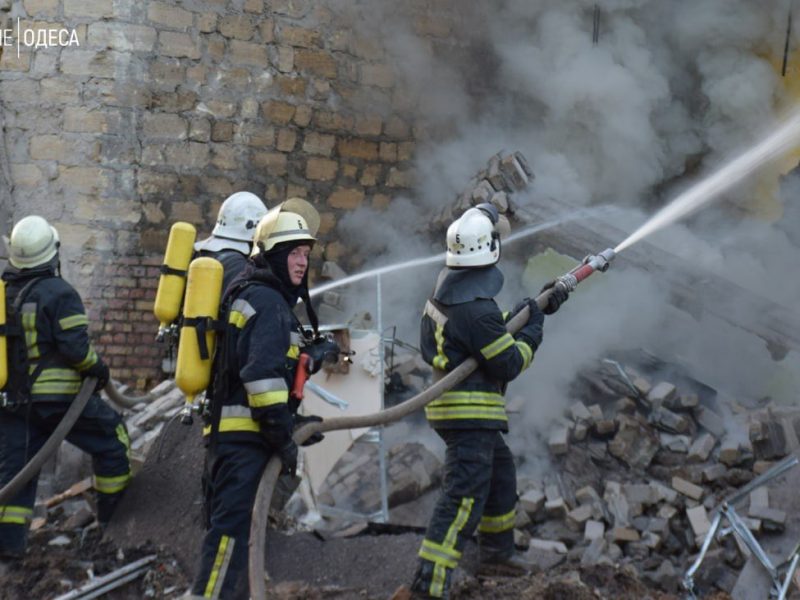 Russia on Monday (2 May) launched a fresh assault on the critical Ukrainian port of Odesa as the United States warned that Moscow was preparing formally to annex embattled regions in the east.

Russian forces turned their heaviest firepower on Ukraine’s east and south after failing to take Kyiv, the capital, as it seeks to limit Ukraine’s access to the Black Sea, vital for its grain and metal exports.

Pummelled by Western sanctions, Russia now faces new measures from the EU that would target its oil industry and banks. The proposed new sanctions were expected to be detailed on Wednesday.

Moscow showed no signs of pulling back, nearly 10 weeks into a war that has killed thousands, destroyed cities and driven 5 million Ukrainians to flee abroad. Russia’s own $1.8 trillion economy is heading for its biggest contraction since the years following the 1991 break-up of the Soviet Union.

“The Russia military reacted today with great anger to our successes,” Ukrainian President Volodymyr Zelenskyy said in his evening address. “The sheer scale of today’s shelling clearly does not indicate that Russia has any special sort of specific military aim.”

Andriy Sadoviy, the mayor of Lviv, a western city near the Polish border, said late on Tuesday that air strikes had damaged electricity and water networks, cutting off power in some districts and causing considerable damage to property.

Olesksandr Kamyshin, head of Ukrainian railways, said Russian forces struck six stations in the center and west of the country. There were no injuries among rail workers or passengers, he said on Twitter.

‘We need a breather’

Mariupol, a city of 400,000 before Russia launched its invasion on 24 February, has seen the bloodiest fighting of the war, enduring weeks of siege and shelling.

In a Telegram video from the steel plant, Captain Sviatoslav Palamar of Ukraine’s Azov Regiment said Russia had pounded Azovstal with naval and barrel artillery through the night and dropped heavy bombs from planes. Reuters could not independently verify his account.

Reuters images showed volleys of rockets fired from a Russian truck-mounted launcher on the outskirts of the Russian-occupied city.

A ceasefire broke down with some civilians still trapped beneath the sprawling Azovstal steel works despite a UN-brokered evacuation.

More than 200 civilians remain in the plant, according to Mariupol Mayor Vadym Boichenko, with 100,000 civilians still in the city.

Weary-looking evacuees, including children and the elderly, clambered off buses after escaping the ruins of their home town in southeast Ukraine where Russia now claims control.

“We had said goodbye to life. We didn’t think anyone knew we were there,” said Valentina Sytnykova, 70, who said she sheltered in the plant for two months with her son and 10-year-old granddaughter.

Zelenskyy accused Russia of breaching agreements to pause fighting long enough to allow vulnerable civilians to be moved to safety, even the UN-coordinated operation at the steel works in Mariupol.

Zelenskyy put the preliminary cost of war damage in Ukraine so far at around $600 billion. He urged foreign companies to pull out of the Russian market because not doing so “means you are directly supporting that war machine.” 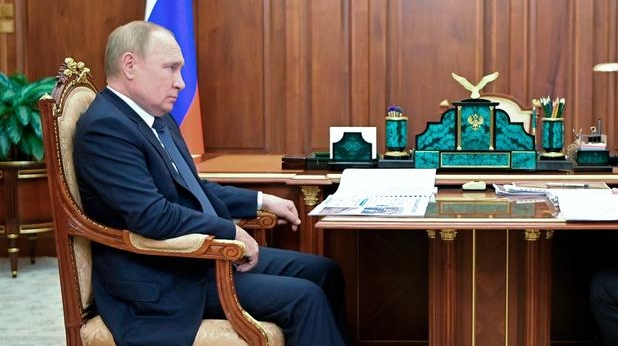 Russian President Vladimir Putin put the West on notice that he could terminate exports and deals, the Kremlin’s toughest response yet to the sanctions burden imposed by the United States and allies over the Russian invasion of Ukraine.

Putin discussed the situation in Ukraine with his French counterpart Emmanuel Macron in a telephone conversation on Tuesday and urged the West to put pressure on Kyiv to halt “atrocities”, Russian news agencies said.

Putin told Macron that the West could help end “war crimes (and) massive shelling of towns and settlements in Donbas”, leading to civilian casualties.

Russia denies alleged war crimes by its own forces in Ukraine and has blamed the deaths of civilians on what it calls nationalists and “neo-Nazis”, a claim dismissed by Kyiv and the West.

“The West could help put an end to these atrocities by exerting appropriate influence on the Kyiv authorities and by halting arms deliveries to Ukraine”, RIA news agency cited the Kremlin as saying.

Putin also told his French counterpart that Moscow was still ready for dialogue with Ukraine.

Macron told Putin that he is willing to work with international organisations to help lift the Russian embargo on Ukrainian food exports via the Black Sea, Macron’s office said.

US, UK step up military aid

President Joe Biden used a visit to a Lockheed Martin defense plant to press the US Congress to approve his proposed $33 billion assistance package for Ukraine, which includes more than $20 billion in military aid.

“If you don’t stand up to dictators, history has shown us, they keep coming, they keep coming,” Biden told assembly line workers at a plant in Alabama that produces the Javelin anti-tank missile, a weapon that has helped Ukraine fight Russia’s invasion.