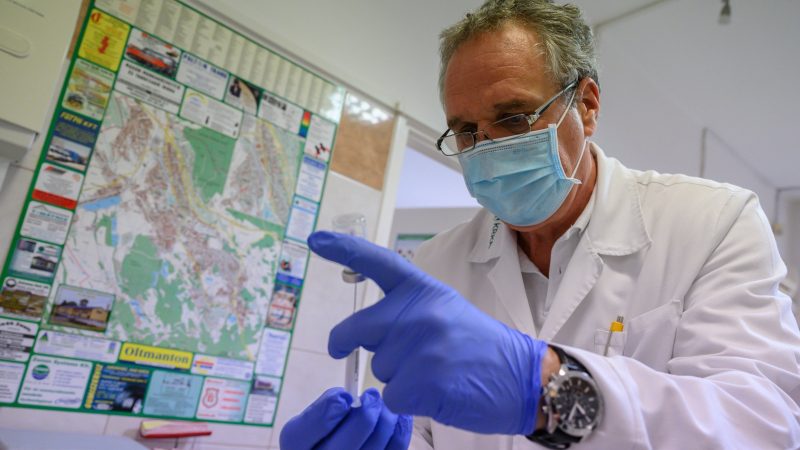 File photo. General practitioner Janos Plavecz prepares to vaccinate an elderly man with the COVID-19 vaccine manufactured by the US biotechnology company Moderna in his surgery in Tatabanya, Hungary, 5 February 2021. [Tamas Vasvari/EPA/EFE]

Hungarian health authorities have approved Russia’s coronavirus vaccine Sputnik V, the government said Sunday (7 February), with 40,000 doses of the jab already to be given.

Official testing has been completed “and the vaccine may be administered”, Miklos Kasler, the human resources minister who is in charge of health, said on social media.

The government had announced Tuesday that it had taken delivery of 40,000 doses of Sputnik V, a first within the European Union.

It is the first batch of a total order of two million doses to be supplied over three months.

Initially viewed with scepticism in the West, the Russian vaccine has since convinced experts of its efficacy.

The medical journal The Lancet on Tuesday published an analysis of final stage testing results showing Sputnik V to be 91.6% effective against symptomatic forms of Covid-19.

Hungary, a country of 9.8 million people close to Moscow, has repeatedly criticised the slow pace of the EU’s process for acquiring vaccines.

It is also the first EU member state to have reached an accord with the Chinese laboratory Sinopharm, announcing an order of five million doses of its jab.

Inoculation with the Sinopharm vaccine was to begin later in February.