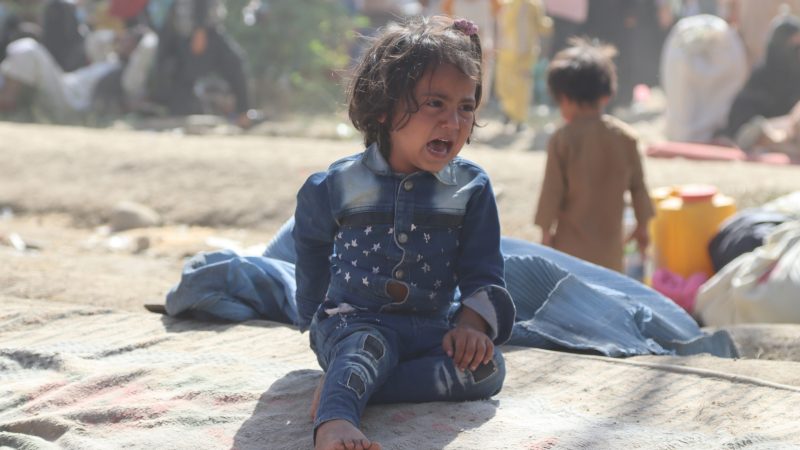 Afghans who are displaced from Kunduz and Takhar provinces due to fighting between Taliban and Afghan forces live in temporary shelters at a camp in Kabul, Afghanistan, 10 August 2021. At least 27 children were killed and 136 were injured in the last 72 hours in different provinces of Afghanistan as fighting intensified due to the Taliban's push for gaining territory, the UNICEF said on 9 August. [EPA-EFE/JAWED KARGAR]

The governments of Austria, Belgium, Denmark, Germany, Greece and the Netherlands wrote to the EU’s executive arm saying they should be allowed to send Afghan migrants back if their asylum bids fail.

Afghanistan urged the EU in July to cease forced deportations of Afghan migrants for three months as security forces battle the Taliban offensive ahead of the full US military pullout from Afghanistan on 31 August.

Their letter asked the European Commission “to engage in an intensified dialogue with Afghan partners on all pressing migration issues including swift and effective return cooperation”.

“Furthermore, stopping returns sends the wrong signal and is likely to motivate even more Afghan citizens to leave their home for the EU,” said the letter, sent on 5 August, which was seen by AFP.

Belgian migration minister Sammy Mahdi confirmed the letter’s contents on Twitter, adding: “Just because regions of a country are dangerous doesn’t mean that every person from that country has the right to protection.”

The Dutch justice ministry also confirmed that it had asked Brussels not to suspend forced deportations, while adding that “developments in Afghanistan were being followed closely”.

Danish Immigration Minister Mattias Tesfaye said he was “happy” that the six countries were of the same mind on the issue.

“It’s important for the government that failed asylum seekers should be sent to their own country,” he said in a statement issued after the letter was originally sent late last week.

But a senior EU official said that because the Afghan authorities had notified Brussels that Kabul was suspending its forced return operations for three months, there was little chance any would go ahead.

“And clearly given the current situation I do not expect forced return operations to actually take place,” the official said.

The official said that so far this year 1,200 people had been returned to Afghanistan from the EU — with 1,000 of those being “voluntary” and 200 “forced”.

The Taliban are in control of seven Afghan provincial capitals after a blitz across the north of the country forced tens of thousands of people to flee their homes.

The United States has all but left the battlefield ahead of the completion at the end of the month of its longest war, following the 2001 invasion to topple the Taliban after the September 11 attacks.

After Kabul’s appeal to EU countries on 11 July, Sweden and Finland halted forced deportations to Afghanistan.

About 400,000 Afghans have been internally displaced by conflict over recent months and there has been an increase in numbers of people fleeing to Iran over the past 10 days, a senior European Union official said on Tuesday.

The official, briefing reporters in Brussels, added that it is becoming more difficult to deliver humanitarian aid in the country due to the ongoing fighting between government forces and a resurgent Taliban.