President of the Venezuelan National Assembly and opposition leader Juan Guaido addresses the media after a meeting with the Confederation of Associations and Agriculture and Livestock Producers (Fedeagro) and the National Farmers Federation (Fedenaga), in Caracas, Venezuela, 6 February 2019. [Leonardo Munoz/EPA/EFE]

About 20 European Union nations including Britain, Germany, France and Spain have aligned with the United States in recognising Guaidó’s leadership and pressuring socialist President Nicolás Maduro to call a new election. 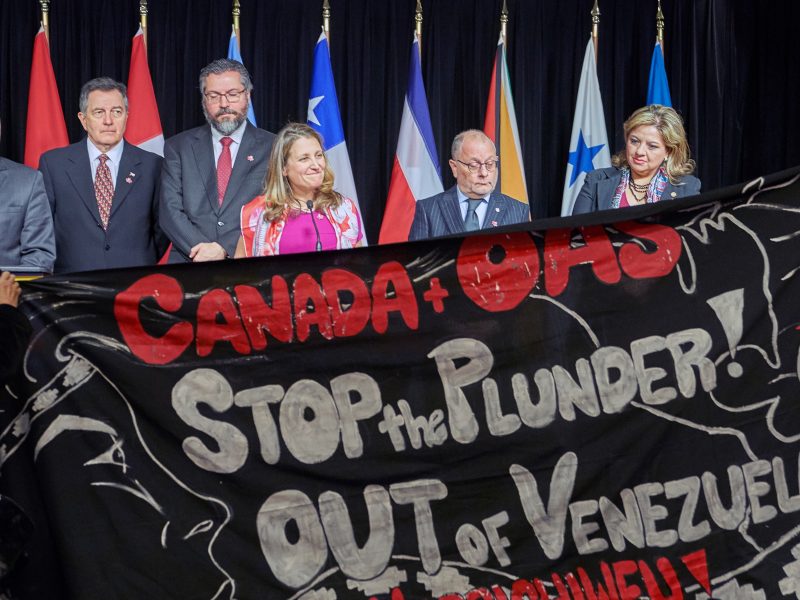 World powers are taking sides in the struggle between the rivals to lead Venezuela, which has ranged some Western nations against Russia, China and others.

Slovakia’s foreign ministry said last week the country saw Guaidó, the head of Venezuela’s National Assembly, as the only legitimate representative of its people and called for a new election.

But Foreign Minister Miroslav Lajčák failed to get backing for that position from two out of three coalition parties at Wednesday’s government meeting.

Leader of the ruling leftist Smer party, Robert Fico, said he saw the situation in Venezuela was an effort to destroy the existing government and install a puppet as head of state.

“Slovakia should act within the principles of international law,” Fico said.

An international meeting to negotiate a solution to the Venezuelan crisis was set to open Thursday in Montevideo.

The European Union, eight other European countries and five Latin American nations were scheduled to meet in the Uruguayan capital with the goal of creating conditions for a peaceful political process, according to a European diplomatic source.

The initiative, originally launched by Mexico and Uruguay as a “neutral countries” conference on Venezuela, has evolved into a meeting of a “Contact Group” launched by the EU in late January, and joined by Costa Rica, Bolivia and Ecuador.

On Wednesday, Maduro — having rejected an EU ultimatum on organizing snap presidential elections — welcomed the meeting and expressed support for “all steps and initiatives to facilitate dialogue”.

But Guaidó has strongly rejected any talks with the government, dismissing it as a way for Maduro to buy time.

“The Venezuelan government … will not lend itself to any kind of false dialogue,” he reiterated Wednesday.

Participants in Thursday’s meeting intended to “find a way between” the positions of US President Donald Trump and Russia’s Vladimir Putin, Turkey’s Recep Tayyip Erdoğan and others, an EU source told AFP.

It is “not easy”, added the source, whose delegation will be led by EU diplomacy chief Federica Mogherini.

Even around the negotiating table, views are divided.

On Wednesday, ahead of the meeting, Uruguay and Mexico — among the few Latin American countries that did not recognize Guaidó — proposed a dialogue without pre-conditions.

“If we demand elections at this time, we impose conditions that make dialogue difficult,” Uruguayan Foreign Minister Rodolfo Nin Novoa said in a joint statement of the two governments.

Mexico agreed to attend the meeting, but did not wish to formally join the Contact Group.

Above all, the EU diplomatic source told AFP the meeting was about agreeing
on “working methods”.

On Wednesday Guaidó warned the army of its responsibilities after soldiers blocked a key border bridge, sparking angry demands from the United States to allow desperately needed humanitarian aid to enter the country.

Venezuela’s army had to choose between “a dictatorship that does not have an iota of humanity, or to side with the constitution” from which he takes his legitimacy, Guaidó said in an interview on Colombian radio.

US Secretary of State Mike Pompeo said Venezuela’s military was deliberately blocking the aid “under Maduro’s orders.” Washington has pledged $20 million in aid, while Canada has pledged $40 million and the EU $7.5 million.

Maduro has refused all humanitarian aid shipments to Venezuela, which he says would open the way to allow a US military invasion. The 56-year-old has repeatedly accused the United States of fomenting a coup.

Meanwhile, 35-year-old National Assembly chief Guaidó has continued to ramp up pressure on the regime with a series of mass protests, the next of which is scheduled for 12 February.

His fledgling alternative administration will hold talks in Washington on 14 February on responding to “the largest hemispheric humanitarian crisis in modern history”.