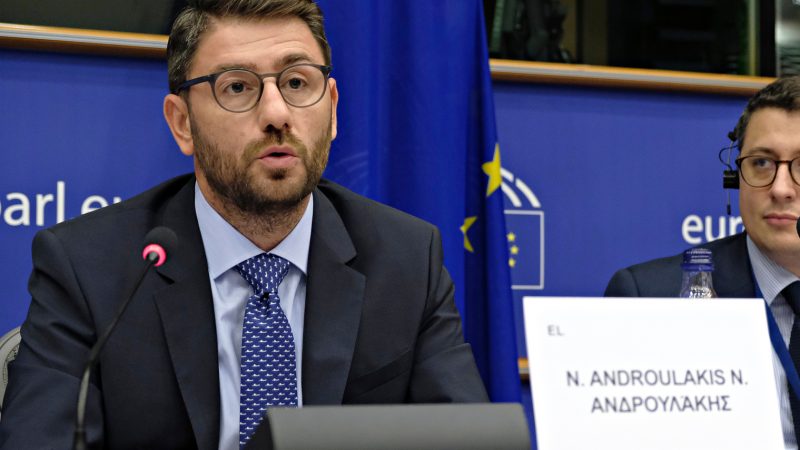 “The proposed sanctions might not help the difficult situation we are facing today, they might actually do Erdogan a favour,” Nikos Androulakis, a Greek socialist MEP from the Pan-Hellenic Socialist Movement (PASOK) told the European Parliament’s foreign affairs committee in Brussels on Thursday (10 September).

“When discussions over Syria were held, the EU Council spoke of an arms embargo, why can’t we do the same now that Turkey is violating the territorial waters of an EU country?” he asked.

At the European Parliament’s plenary session next week, EU lawmakers are set to discuss a resolution on the EU’s position on Turkey.

Androulakis said his party would table amendments which will call on the EU’s chief diplomat Josep Borrell to “take into consideration a weapons embargo against Turkey, because Greek citizens should not be in a state of fear that European weapons sold to Turkey are going to be used against them.”

EU leaders will hold a special EU summit on 24-25 September to discuss how to resolve the crisis between Cyprus, Greece, and Turkey over energy resources in the Eastern Mediterranean.

However, an arms embargo could become a bone of contention.

This made Turkey by far the number one importer of German weapons, at a time when the flare-ups in Syria have put weapons sales to Ankara under intense scrutiny.

Last month, Turkey sent an exploration vessel backed by military frigates into waters between Greece and Cyprus, prompting Athens to respond with its own naval exercises.

Greece’s deputy foreign minister told the same parliamentary committee meeting in Brussels that EU leaders should impose “severe” economic sanctions on Turkey for a limited time if Ankara does not remove its military vessels and gas drilling ships from waters off Cyprus.

“The sanctions should put severe pressure, for a limited time, but severe, in order to send the message that Europe is here to negotiate but is also here to defend its values,” Miltiadis Varvitsiotis said.

Varvitsiotis told MEPs that Turkey is “a major destabilising factor in the wider area”.

“This should be an issue of concern for the EU and the international community,” he added.

Some member states will be pressing for sanctions against Turkey at the EU summit, and French Foreign Minister Jean-Yves Le Drian said last weekend such measures were on the table.

Greek Prime Minister Kyriakos Mitsotakis wrote in French daily Le Monde that “if Turkey refuses to listen to reason before [the summit], I don’t see any choice for my European colleagues except significant sanctions”.

French President Emmanuel Macron urged Europe on Thursday to show a united front against Turkey’s “unacceptable” conduct as he prepared to host a summit of Mediterranean states, expected to be dominated by growing tensions with Ankara.

France has strongly backed Greece and Cyprus in the growing standoff with Turkey over hydrocarbon resources and naval influence in the eastern Mediterranean.

“We Europeans need to be clear and firm with the government of President Erdogan which is today behaving in an unacceptable manner,” Macron told reporters in Corsica, where the summit was to open.

He said that at the moment Turkey was “no longer a partner in the region” because of its behaviour, though he hoped to “restart a fruitful dialogue”.