Source: Erdogan will back down at first sign of EU unity 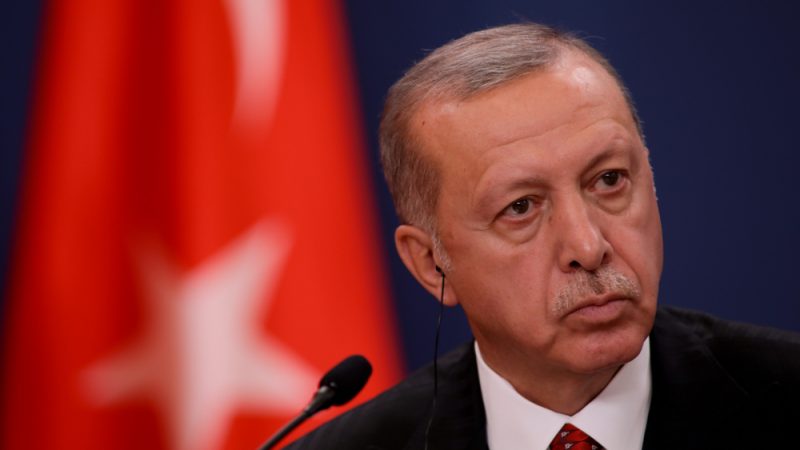 It's time the EU finally mind up its mind about what to do about Turkey, writes Robert Ellis. [Shutterstock/Sasa Dzambic Photography]

Turkish President Recep Tayyip Erdoğan will step back from his aggressive stance toward Europe “in the first sign of EU unity”, a source in Brussels told EURACTIV.com.

“We believe that if Europe shows the first sign of unity, Erdoğan will back down, to slap him back somehow,” the source said.

“Europe now understands that Erdoğan is using Russian President Vladimir Putin’s tactics. With his moves, he tests Europe’s reaction, and accordingly, sees how far he can go,” the source added.

The source said Erdoğan’s tactics aims to either test waters or lead toward full confrontation with Europe.

“Last Friday (20 November) a meeting with Erdogan’s adviser Ibrahim Kalin took place, on Saturday Erdoğan said Turkey belongs to Europe and at the same time he issued a new NAVTEX in the Eastern Mediterranean and then the incident with IRINI operation occurred. It seems that Erdogan is kidding, testing waters or wants a total confrontation,” the source said, adding the one scenario does not exclude the other.

NAVTEX is an automated system used to transmit navigational alerts, weather warnings and urgent safety and rescue information. It is widely used to warn of military exercises.

EU leaders will meet at critical summit on 10-11 December to decide the next steps regarding EU-Turkey relations amid increasing escalation on a number of issues, ranging from gas drillings in the Eastern Mediterranean, to a row with France and most recently with Germany as well.

Germany, Italy, Spain and Hungary are among the EU countries which have so far opposed EU sanctions against Ankara saying that dialogue should be prioritised.

Bulgaria reportedly took no position, but its Prime Minister Boyko Borissov is largely seen as Erdoğan’s man in the EU.

But according to the source, things are now slightly changing.

“The climate is changing even in those countries that have been reluctant to impose sanctions, because Turkey has nothing positive to present. Hungary’s Viktor Orbán strongly supports Erdoğan because they both have the same authoritarian logic as Putin,” the source said.

Speaking at the European Parliament on 24 November, EU chief diplomat Josep Borrell by trying to engage in a diplomatic dialogue with Turkey, Europe is not bowing to Ankara’s pressure.

“We have to continue reaching out to Turkey […] at the next summit, we will have to make important decisions about our relationship with Turkey,” Borrell said, adding though that the EU stands by Cyprus and Greece.

Borrell added that it was not up to him to decide whether there will be sanctions or not. “The EU leaders will have to make decisions,” he said.

The incident with operation IRINI

The European Commission issued a statement on 24 November, providing details about a recent inspection of a Turkish vessel by the EU operation IRINI off Libya.

The EU executive said all international maritime practices were applied.

“Operation IRINI had made good faith efforts to seek the consent of the flag State by giving the Turkish Ministry of Foreign Affairs a 4-hour notice in line with the international maritime practice. Operation IRINI even agreed to extend this notice by an additional hour at the request of the Turkish Embassy in Rome, where Operation IRINI’s Headquarters are located,” the Commission said.

The EU executive added that it received no answer from Turkey after the elapsed time and the Operation IRINI boarded the vessel and inspected it in accordance with internationally agreed procedures including NATO procedures.”

“The inspection was suspended later on, when Turkey formally and with delay notified Operation IRINI of its refusal to grant the permission to inspect the vessel. Until then, the inspection had found no evidence of illicit material on board and the vessel was cleared to pursue its route,” the Commission said.

According to sources, under international law, states have the right to deny inspection as this has happened in the past.

But it is “unusual” in international practice for a state not to respond to an inspection request within 4 hours.

The same sources added that the crew was very cooperative and in Brussels many suspect that Turkey’s political leadership just wanted to politicise the issue.