Heiko Maas at a joint press conference with his Austrian counterpart in Berlin in February. [EPA-EFE | Hayoung Jeon]

Solidarity and sovereignty is the name of the game for the German EU presidency, according to Foreign Minister Heiko Maas (SPD). In a speech on Monday (29 June), he emphasised the need for greater EU independence from the current geopolitical power struggle between the US and China. EURACTIV Germany reports.

On Wednesday (1 July), Germany will take over the EU Council presidency and the myriad European challenges that come with it. In the realm of foreign policy, that entails the EU’s relationships with the US, China and Africa, as well as post-Brexit-Britain.

Maas laid out Berlin’s policy priorities in his opening speech to the annual meeting of the European Council on Foreign Relations (ECFR), a European think tank. They include greater European sovereignty in terms of resources, technology and defence as well as a more confident stance on China and the US.

Speaking with one European voice vis-á-vis China is “indispensable” according to Maas, in particular given the “need to investigate the pandemic and the increasingly robust action taken by China in Hong Kong and its neighbourhood.”

By Maas’ standards, these comments could be considered tough talk.

When China announced in May its new “security law” for Hong Kong, which is set to extend Beijing’s firm grip of the mainland to the former British colony, observers hoped that Germany would take a stance. After all, Maas met with Joshua Wong, the leading figure of Hong Kong’s pro-democracy-movement nine months ago, much to Beijing’s anger.

However, it took Berlin a week to come out with a statement on the law, which the liberal opposition party FDP called “lifeless”, saying Berlin should have recalled their ambassador to China.

This makes Maas’ call for a unified European position on China and its actions in Hong Kong noteworthy. He also asked to reschedule the cancelled EU-China summit “for this reason” and “as soon as possible,” hinting that the government could confront China there.

Saying it without saying it

The German foreign minister also made oblique comments possibly referring to China’s extended arm in Africa, where Beijing has been very active in providing development aid, which has prompted fears about their growing influence on the continent. Something that prompted Austrian Chancellor Sebastian Kurz (ÖVP) to state in 2018 that Europe should not “leave Africa to the Chinese.”

Maas refrained from such direct words, saying that poorer regions of the world “will need a great deal of help,” and “if we, democracies, do not provide it, others will do at a price that will in the long-term be significantly higher for us, but also for others.” 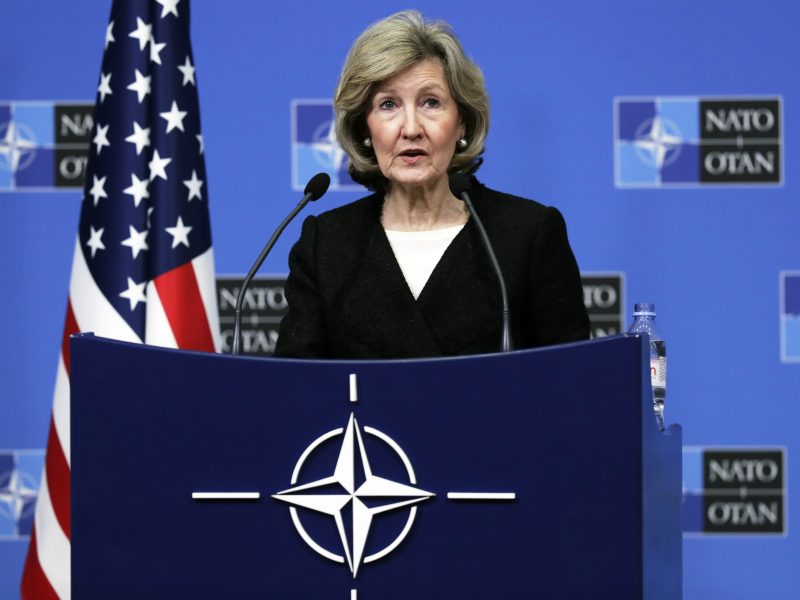 There is no sign of a US retreat from Europe’s security structure, the US Ambassador to NATO told EURACTIV, commenting on Washington’s troop withdrawal plans from Germany. At the same time, NATO secretary-general confirmed that President Donald Trump had decided on the withdrawal without informing the alliance in advance.

‘Even without the US’

Germany will also be at the helm of the European Council during the US presidential election on 3 November. Maas said one of Germany’s priorities will be to draw up “a constructive agenda with which we can approach a new Biden administration or a second Trump administration.”

However, Maas emphasised greater European sovereignty in its relationship with Washington, particularly when it comes to defence. “We will have to think about how to better contain the conflicts in Europe’s vicinity, even without the US,” he said.

This comes on the heels of the announcement that Washington will be removing a third of its troop presence from Germany. Two weeks after the initial report in the Wall Street Journal, President Donald Trump confirmed the plan to withdraw 9,500 troops at a cabinet meeting on 16 June.

For Maas, greater strategic independence from the US is necessary regardless of the outcome of the election, though a number of observers hope that a victory for Democrat Joe Biden could help restore normality in the relationship, given his support for NATO and other mainstream foreign policy views.

In his campaign plans, Biden promises to not only “restore our historic partnerships” but also “lead the effort to reimagine them for the future.”

Maas has recently voiced his doubts. “Anyone who thinks that with a Democratic Party president everything in the transatlantic partnership will be the same as it once was underestimates the structural changes,” he told the German Press Agency (dpa) in an interview on Sunday (28 June).