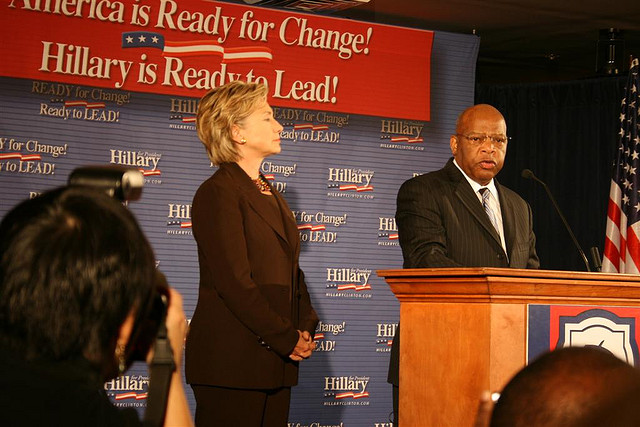 Clinton, during her first campaign for the Presidency. Democratic primary, 2007. [wfowlkes/Flickr]

Germany’s foreign minister welcomed Democrat Hillary Clinton’s expected announcement that she will run for the U.S. presidency in the 2016 election race, saying she had showed herself to be a strong partner for Europe.

Clinton has officially opened her campaign late on Sunday as her party’s front runner in the 2016 election race.

While Clinton enters the race as prohibitive favorite to be her party’s presidential nominee, a crowd of potential candidates are vying for the Republican nomination.

In announcing her presidential bid in 2007, Clinton spoke to the camera alone while sitting on a couch and asked voters to join her later for a series of Web chats.

Opinion polls show Clinton has a huge lead over potential Democratic rivals, and few are expected to enter the race. A Reuters-Ipsos tracking poll shows Clinton backed by more than 60 percent of Democrats.

Clinton’s campaign will be based around her plans to address economic inequality and will tout the historic nature of her effort to become the first woman US president, aides said.

“Hillary Clinton … has profiled herself not only as a reliable partner for Europe and as friend of Germany, but she has also proven she has sure instincts in world crises – from Afghanistan to the Middle East,” wrote Steinmeier.

He said she knew and understood Europe’s way of thinking and that in turbulent times it was important to have a partner at the top of the United States who was not driven by ideology.

“With Hillary Clinton, there is a woman running who is a master of the craft of politics like few other people. Above all in foreign affairs,” wrote Steinmeier, a member of the centre-left Social Democrats who are closer to the Democrats than the Republicans.

Although Steinmeier is foreign minister, his views would not reflect those of conservative Chancellor Angela Merkel. She refused to let Barack Obama hold a speech at Berlin’s famous Brandenburg Gate in 2008 before he was elected president.

Relations between the two Cold War allies have deteriorated in the last couple of years due to revelations of widespread surveillance of German citizens, including Merkel’s phone, by the US National Security Agency (NSA).

Last year, Berlin told the U.S.’s top intelligence official in the embassy to leave over a spying scandal.

Steinmeier said he got to know Clinton during his first term as foreign minister and “valued her as a wise partner to talk with and also as a politician who can listen”.