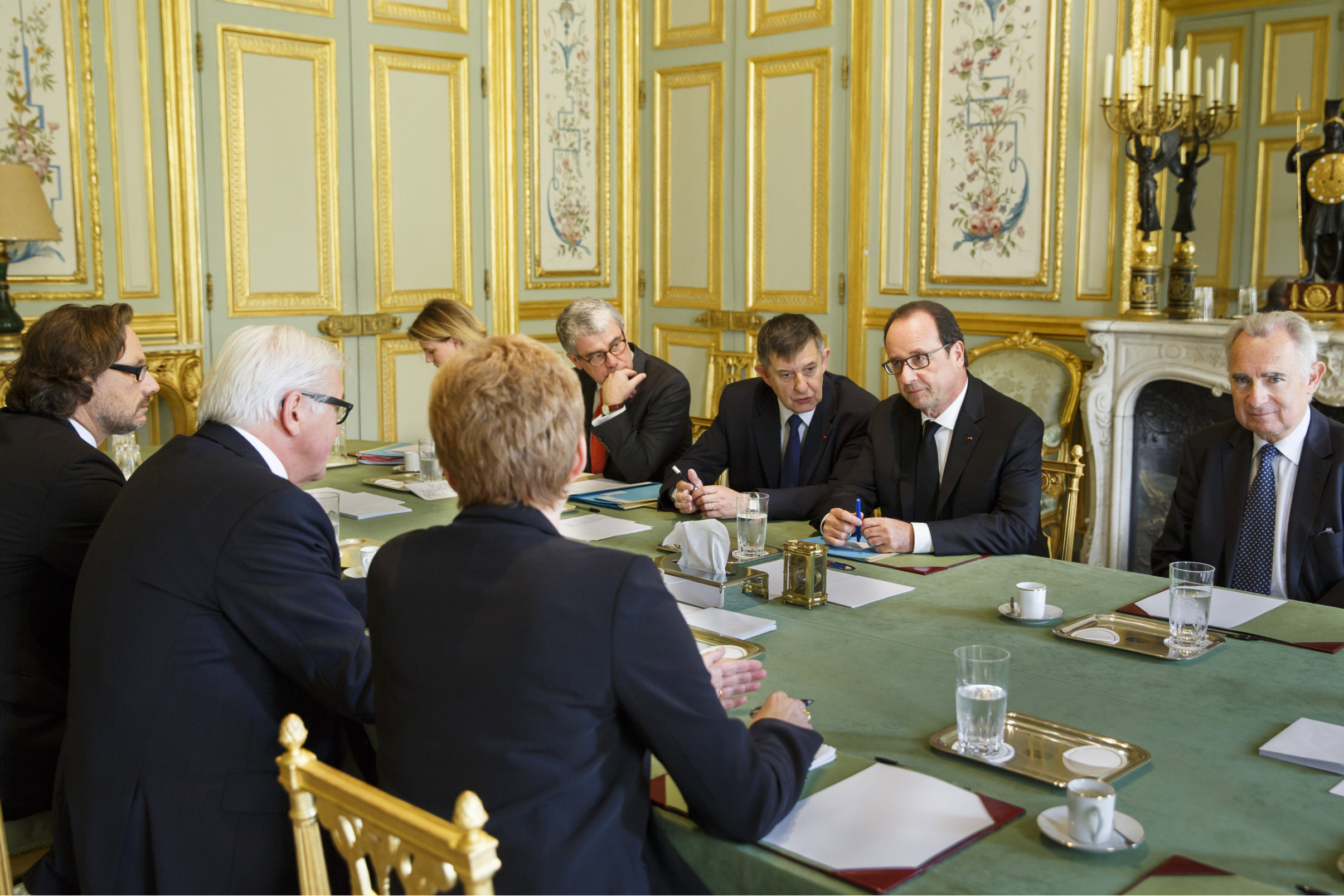 German Foreign Minister Frank-Walter Steinmeier attends as a guest in a meeting of the French cabinet with President Francois Hollande. [Auswärtiges Amt]

Whenever the opportunity arises, Steinmeier and Fabius praise their mutual “cooperation accompanied by personal friendship” to illustrate the dynamic nature of French-German ties.

The two made joint visits to Moldova, Georgia and Tunisia earlier this year. They travelled to Kyiv in February, while gunshots could still be heard on the Maidan, to promote a solution to the Ukraine crisis with Foreign Minister Radoslaw Sikorski. They speak informally with each other and are setting many firsts at the foreign minister level.

On 14 May this year, German minister Steinmeier was received as the first outside minister of foreign affairs to join as a guest in a cabinet meeting of the French government.

And more recently, Fabius expressed his gratitude with a reciprocal visit to Berlin, where he also took part in a meeting of the German cabinet and a session of the Bundestag’s Foreign Affairs Committee.

French deficit in the background

But recent stutters in the Franco-German engine regarding budget stability was likely the reason why the issue was not on the agenda for the two foreign affairs ministers.

Not long ago, German Finance Minister Wolfgang Schäuble said he believed France was in a crisis of trust due to high debt and incomplete reforms.

Speaking at a joint press conference in Berlin, Steinmeier made it clear that this issue would remain in the background of the visit.

“It would be too shortsighted to solely view respective neighbours from the perspective of growth numbers and budgets,” Steinmeier said.

Instead, the foreign minister said, Germany and France must develop even closer cooperation, particularly with regard to European foreign policy. For instance, Steinmeier said it was no longer acceptable that Germany’s foreign policy is primarily directed at Eastern Europe, while France mainly focuses on maintaining contact with Southern Europe and Africa.

“That no longer represents reality,” he warned.

Closer cooperation between German and French embassies in third countries, a joint presence in African crisis states and a common approach to a political solution in states like Syria and Iraq were all efforts that Fabius favoured as well.

Europe is moving increasingly toward common defence, the French politician said. In this regard, the Franco-German community of fate is “more necessary today than ever before because we must tackle crises together,” he argued.

Steinmeier and Fabius currently face numerous trouble spots across the globe. Whether in Ukraine, Syria, Iraq or Mali: Irregular fighters are stirring up conflicts in various regions of the world. These forces seek to oppose a supposed occupational power, whether it is the central government in Kyiv or the regime of “unbelievers” in Iraq.

Nevertheless, the EU hopes to stay out of combat. In a recent statement before the European Parliament, EU High Representative Federica Mogherini called the Islamic State a “significant global threat” and a “threat to us all”, but she ruled out an EU combat mission.

This position is also supported by Steinmeier and Fabius. They repeated their shared opposition to putting boots on the ground in Syria and Iraq to fight IS.

“In Syria we support the moderate rebels,” Fabius indicated. The train and equip-programme initiated by the Americans to help the Kurds should also be supported, he said. But in the medium-term, a solution in the fight against IS can only be political.

On the other hand, France and Germany may not be so far from joint military involvement in the Ukraine conflict. The two countries have invested much hope in the Minsk Agreement implementing a peace plan from Ukrainian President Petro Poroschenko and initiatives submitted by Russian President Vladimir Putin.

But just a few days ago both Steinmeier and Fabius expressed willingness to contribute drones to a surveillance mission by the Organisation for Security and Cooperation in Europe (OSCE) to watch over a ceasefire in Ukraine.

The “security situation on the ground makes a military component” necessary, the German defence minister stated.

But a campaign of this kind still faces a number of obstacles.

The OSCE is not actually designed to take on armed missions, casting doubt over the question of whether such a mission can even be accompanied by armed soldiers from the Bundeswehr and French army. And, the Ukrainian parliament must sign off on the plan.

But Steinmeier and Fabius seemed optimistic that the OSCE’s investigation of the proposal will conclude this month, in usual agreement.

Often taken for granted today, the Franco-German alliance dates back to 22 January 1963, when German Chancellor Konrad Adenauer and French President Charles de Gaulle returned to a clean slate after centuries of enmity between the two nations.

The signing of the Élysée Treaty was intended to reconcile the two countries, while working toward a common path in European integration.

Together, France and Germany are often referred to as the engine of Europe.