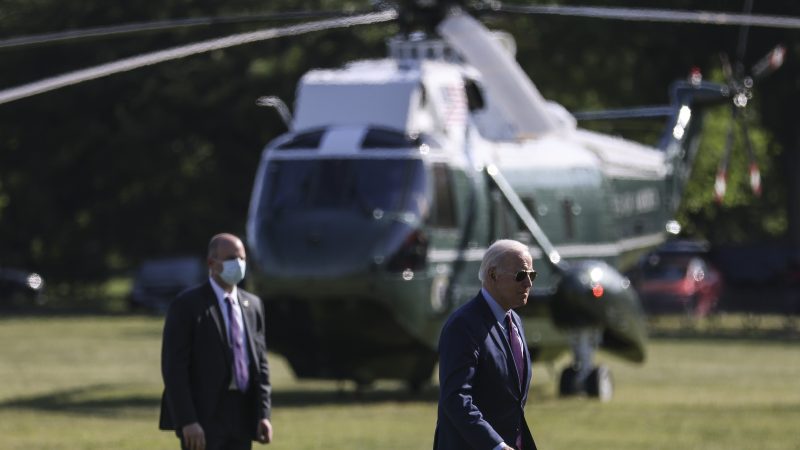 US President Joe Biden walks at the Ellipse near the White House, in Washington, DC, USA, 18 May 2021. [Pool/EPA/EFE]

With his muted response to the Gaza conflict, President Joe Biden is largely sticking to a time-worn US playbook despite pressure from progressive Democrats for a tougher line toward Israel and from America’s allies for a more active role to end the violence.

By citing Israel’s right to defend itself against a rocket barrage from the Hamas-ruled enclave and only nudging Prime Minister Benjamin Netanyahu toward a ceasefire, Biden has effectively given Israeli forces more time to press their offensive against Palestinian militants there.

US officials hope both sides will reach a point when they will be ready to wind down their attacks in coming days and that quiet, behind-the-scenes diplomacy involving regional players such as Egypt will help achieve an end to the hostilities, people familiar with the matter say.

However, Biden’s effort to cautiously navigate the crisis in the Gaza Strip will be put to the test if in the meantime the fighting increases and the civilian death toll rises sharply.

“There’s a playbook that’s being followed,” said Aaron David Miller, a former US Middle East peace negotiator for Democratic and Republican administrations. “But there’s always room for the unpredictable.”

When Biden took office in January, he made it clear that he wanted to focus on the coronavirus pandemic and economic downturn at home and challenges such as China, Russia and Iran abroad.

Tackling the Israeli-Palestinian conflict, something that has bedeviled US presidents for decades, was not a top priority, though he had promised to revise some policies of his predecessor, Donald Trump, that were widely considered heavily biased in favor of Israel and which alienated Palestinians.

It was weeks before the new president talked to Netanyahu, a right-wing leader who cultivated strong ties with Trump.

The latest eruption of Gaza violence caught the new administration off guard, and it has responded so far in accordance with a familiar pattern.

Biden, a longtime supporter of Israel from his decades in the Senate and the vice presidency, began by backing Israel’s right to self-defense against the cross-border rocket attacks, something successive presidents have always said of Washington’s chief Middle Eastern ally.

This comes at a time when the Biden administration has sought, to little avail, to assuage Israeli concerns as it negotiates over a possible return to the 2015 Iran nuclear deal.

It took Biden until Monday, after Israel’s destruction of a Gaza high-rise that housed offices of the Associated Press and Al Jazeera news organizations but which Israeli officials said also sheltered militants, to voice support for a ceasefire.

But the White House, apparently reluctant to antagonize, made clear he was not demanding that Israel agree to one.

The current hostilities are the most serious between the militant group and Israel in years, and in a departure from previous Gaza conflicts have helped to fuel violence in Israeli cities between Jews and Arabs.

Gaza medical officials say 217 Palestinians have been killed, including 63 children, and more than 1,400 wounded since the fighting began on 10 May. Israeli authorities say 12 people have been killed in Israel, including two children.

Taking note of the disproportionate casualties, some progressive Democrats, a group that helped Biden win the Democratic nomination and the presidency, are pushing for him to be more assertive with Israel.

“We need to have a ceasefire. The president should demand it, not just say he supports it,” US Representative Ro Khanna said.

Biden so far has shown no signs of giving much ground, and left-leaning Democrats may not be ready to confront him head-on.

The Democratic-led House of Representatives Foreign Affairs Committee met on Monday, after which some members said its chairman, Representative Gregory Meeks, planned to send a letter asking Biden to delay a planned $735 million smart bomb sale to Israel. However, Meeks had decided by midday on Tuesday not to send the letter.

Republicans have sought to use the Gaza conflict to hammer Biden and his fellow Democrats. Pro-Israel voters are a major part of the Republican political base and many are also Democrats and independents.

Senate Minority Leader Mitch McConnell said anyone who advocates for a ceasefire is “basically suggesting that there is moral equivalency” between Israel and Hamas, which the United States views as a terrorist group. “There are a significant number of Democrats who want to throw Israel under the bus,” he said.

At the same time, the Biden administration, which has touted its multilateral credentials, has found itself isolated over the Gaza issue at the United Nations. The United States has blocked any Security Council action on the issue, saying it would not help calm the crisis and would continue intensive diplomacy.

Biden, however, has not yet named an ambassador to Israel and dispatched to the region a mid-level official, Deputy Assistant Secretary of State Hady Amr, instead of a more senior envoy.

The administration would like to get on a path in coming days leading to what a source familiar with the situation called a humanitarian pause in the violence to let relief assistance be delivered to Gaza and build a sustainable calm.

The Biden administration was also believed to be preparing significant initiatives on Gaza humanitarian reconstruction, the source said.

Biden was confronted with the issue on Tuesday on a trip to Michigan, where he was met by US Representative Rashida Tlaib, the first Palestinian American woman to serve in Congress and a leading progressive Democrat. She told him that “Palestinian human rights … must be protected, not negotiated,” according to an account provided by a Tlaib ally.