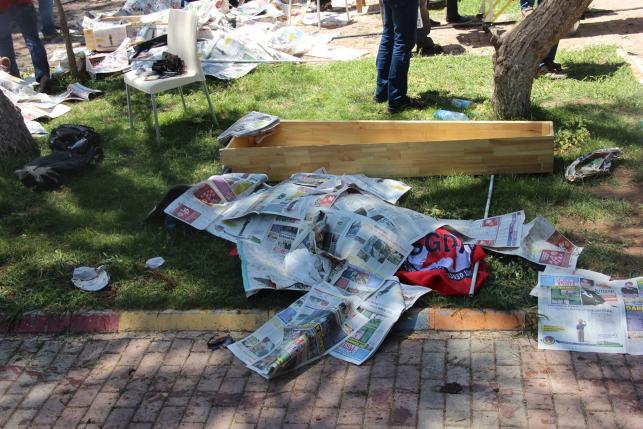 The body of a victim, covered by newspapers, lies next to a coffin after an explosion in Suruc. Turkey, 20 July. [Reuters]

A suspected Islamic State suicide bomber killed at least 30 people, mostly young students, in an attack on a Turkish town near the Syrian border yesterday (20 July).

Bodies lay beneath trees after the blast outside a cultural centre in the mostly Kurdish town of Suruç in southeastern Turkey, some 10 kilometres from the Syrian town of Kobani, where Kurdish fighters have been battling Islamic State.

The explosion tore through a group of mostly university-aged students from an activist group as they gathered to make a statement to the local press about a trip they were planning to help rebuild Kobani.

Turkey’s NATO allies have been seeking tighter controls on a porous border with Syria that runs alongside Islamic State-held territories. But monitoring is difficult, with 1.8 million Syrian refugees now on the Turkish side and smuggling rife.

The United States, which has an air base at Incirlik in southern Turkey, though it is not being used for its air attacks on IS forces, called the bombing a “heinous terror attack”.

Prime Minister Ahmet Davuto?lu told a news conference in Ankara 30 people had been killed. “It is…most probably a suicide bombing.”

Hurriyet said the attacker was an 18-year old woman, but there was no confirmation.

“Turkey has taken and will continue to take all necessary measures against the Islamic State,” Davuto?lu said, without giving details. “Measures on our border with Syria…will be increased.”

One witness, giving his name as Mehmet, told Reuters by telephone he saw more than 20 bodies.

“It was a huge explosion, we all shook.”

Video footage showed young men and women standing behind a banner declaring support for Kobani, some holding up small red flags. Suddenly there was a huge explosion, apparently from within the crowd, sending up a column of flame.

‘Terror has no religion’

The Suruç attack comes weeks after Turkey deployed additional troops and equipment along parts of its border with Syria, concerned about the risk of spillover as fighting between Kurdish forces, rebel groups, Syrian government troops and Islamic State militants intensifies.

An explosion also occurred in Kobani shortly afterwards, which a monitoring group blamed on a car bomb. A spokesman for Syrian Kurdish forces, known as the YPG, said two fighters died.

Turkey’s leaders have said they do not plan any unilateral military incursion into Syria but have also said they will do whatever is necessary to defend the country’s borders.

“Terror has no religion, no country, no race,” President Recep Tayyip Erdo?an said of the bloodiest such attack in Turkey since at least 50 people were killed in the town of Reyhanli near the border in 2013.

Ankara fears any disorder in the border area could re-ignite an armed Kurdish rebellion by the Kurdistan Workers Party (PKK) in the south-east that has killed some 40,000 since 1984. It must also consider the danger of attacks in sprawling Western cities such as Istanbul where British and Jewish targets were bombed by al Qaeda in 2003 with the loss of 60 lives.

Turkey’s Kurds have been enraged by what they see as the AKP party government’s failure to do more to stop Islamic State. The PKK held Ankara responsible for Monday’s attack, saying it had “supported and cultivated” Islamic State against the Kurds.

Kobani was the site of one of the biggest battles against Islamic State last year and was secured by Syrian Kurdish fighters last month after repeated assaults.

The YPG drove the Islamist militants back from the town with the help of US air strikes after months of fighting and siege.

The students from the Federation of Socialist Youth Associations had been planning a trip to Kobani to build a library, plant a forest and build a playground, Fatma Edemen, a member of the group wounded in the blast, told Reuters.

“I was behind a banner so I couldn’t see the attacker, but we understand it was a suicide attack. I was thrown to the ground…I jumped up and began running before I even realised I was hurt,” Edemen, a 22-year-old journalism student at Ankara University, said by telephone.

The blast came after a series of attacks on the Kurdish HDP party in the run-up to a June 7 election in Turkey, including two small bombs at a political rally in the city of Diyarbakir, which the party blamed on Islamic State sympathisers.

“What gives us pause about this attack is that while the others were haphazard and sloppy … the size of this explosion suggests something more sophisticated,” said Aaron Stein, an Atlantic Council fellow who specialises on Turkey and Syria.

“That would suggest organisation beyond a lone wolf cooking up something in their kitchen.”

“Today's terrorist attack in Turkish town of Suru? targeting young volunteers from the Federation of Socialist Youth Associations (SGDF), who were gathered to go and help with the reconstruction of Kobane, aimed to further destabilise the region and communities living side by side. The attack adds to the pain and suffering of Syrian people fleeing violence and destruction, and of the Turkish people so generously engaged in helping them.

“The EU stands by the people and government of Turkey at this very difficult time. We are ready to provide practical support to Turkey. We extend our deepest condolences to the bereaved and sympathies to those injured.

“Terrorist groups will not prevail in their goal to undermine international steadfast determination to defeat them. The EU, Turkey and all other regional and international partners will work together even more closely to tackle this threat.”

“The fact that a group of socialist young people in Turkey have been massacred as they prepared to volunteer in Syria, is so abominable that it is beyond belief.

“These Turkish and Kurdish young people were socialists - they believed in solidarity between peoples. Acting on those principles, they were in Suruç before they set off to help with the reconstruction of the Syrian town of Kobane. It is nothing short of abominable that they were reportedly the victims of a suicide bomber attack.

“I send my heartfelt condolences to the families of the victims of the attack. We must stop these disgusting attacks from happening and from tearing our young people away from their families. Cooperation is urgently needed in the fight against Islamic State extremists. I urge all parties to join forces to combat Islamic State in Turkey and elsewhere in the region.”

PES member CHP President Kemal K?l?çdaro?lu condemned the "insidious" attack in Suruç and immediately sent a delegation of 10 Members of Parliament to the area.