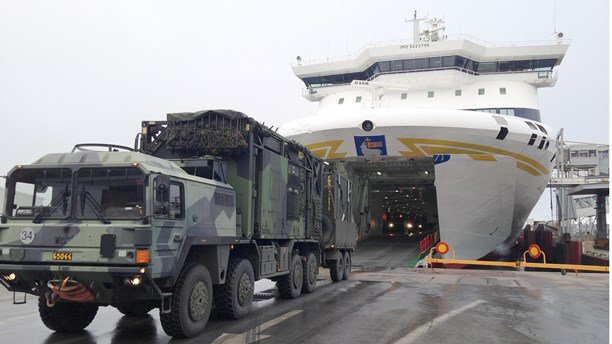 Sweden’s military said on Thursday (13 January) it was ramping up its visible activities on the Baltic Sea island of Gotland amid increased tensions between NATO and Russia and a recent deployment of Russian landing craft in the Baltic.

Moscow has spooked the West by massing troops near Ukraine, sparking fears that it is considering invading. Moscow denies any such plans, saying it can deploy forces on its territory however it chooses.

Gotland, Sweden’s biggest island, is strategically important and lies around 330 kilometres from Kaliningrad, the headquarters of Russia’s Baltic Fleet. In 2019 Sweden deployed an updated ground-to-air missile defence system on the island.

Reading more into it, Gotland is a strategic point because it would allow Russia to control the Baltic Sea and it would help isolating the Baltic countries. NATO has feared an attack on the Suwalki Gap for this exact same reason. An offensive could be launched from Kaliningrad. pic.twitter.com/HZgVuMbINn

Lieutenant General Michael Claesson, Chief of Joint Operations at the Armed Forces, told Reuters that from Thursday troops were patrolling the harbour and airport of Visby, Gotland’s main town.

Sweden is not a NATO member but has close ties to the Atlantic alliance and has been beefing up its armed forces after decades of neglect amid increased anxiety over Russian sabre-rattling in the Baltic Sea region.

Claesson said the Gotland move was triggered by Russian landing ships entering the Baltic Sea this week and followed years of deteriorating security conditions, including in Sweden’s immediate geographic vicinity.

As Russia sends out 3 amphibious warfare ships into the Baltic Sea Sweden ramps up preparedness on Gotland with reservists around ports, Visby airport and other military protection objects … #säkpol https://t.co/wh7R4AQTuQ

“Recent security developments and tensions at security policy level have not changed that picture but rather reinforce it,” he said, adding that the armed forces had recently noted an expansion of foreign offensive capability near Sweden.

“… Russian landing ships are an example of such offensive capability,” he said. “They have passed through (Denmark’s) Great Belt strait and continued into the Baltic Sea.”

Claesson said the armed forces were also taking action in other parts of Sweden in response to recent Russian moves but declined further comment.

Sweden’s top military commander said last week that Sweden’s security strategy would be entirely undermined if NATO agreed to refrain from expanding further and to curb some of its activity in Europe, as Russia has demanded.

How capable is Russia of an expeditionary operation against Sweden's #Gotland? This Sept 2021 piece concludes that it would be militarily possible for Russia to take Gotland, but it would be logistically difficult. https://t.co/p9NYd4skmP