EU foreign affairs chief Federica Mogherini at the “Supporting the future of Syria and the region” conference on 25 April 2018 in Brussels. [Council]

Humanitarian agencies also pleaded for peace before the Syrian military and its Russian and Iranian backers turn their firepower on the rebel-controlled Syrian city of Idlib, warning of civilian suffering on a greater scale than during the siege of Aleppo last year.

“What I fear is a very cruel battle engulfing Idlib. We cannot accept the war moves towards what is essentially a gigantic refugee camp,” Jan Egeland, a senior UN adviser on Syria, said of the northwestern region.

I tell Syria conference 100,000s Syrians risk being forced to return to unsafe & explosive-ridden neighbourhoods without basic services, or where there’s active fighting. Protecting them must be top priority. #SyriaConf2018

“There have to be talks to spare the civilians from the fighting,” he said, adding that 2.5 million people were at risk.

Britain, Germany and France were among those offering new money for refugees at the conference, which brought together 86 governments, aid groups and financial and regional institutions.

Pledges of $3.4 billion also came in for 2019-2020 and the EU’s humanitarian chief, Christos Stylianides, said the bloc and its member states offered the lion’s share of the sum.

But the figure was less than the $6 billion gathered for 2017 as US President Donald Trump cuts foreign aid. 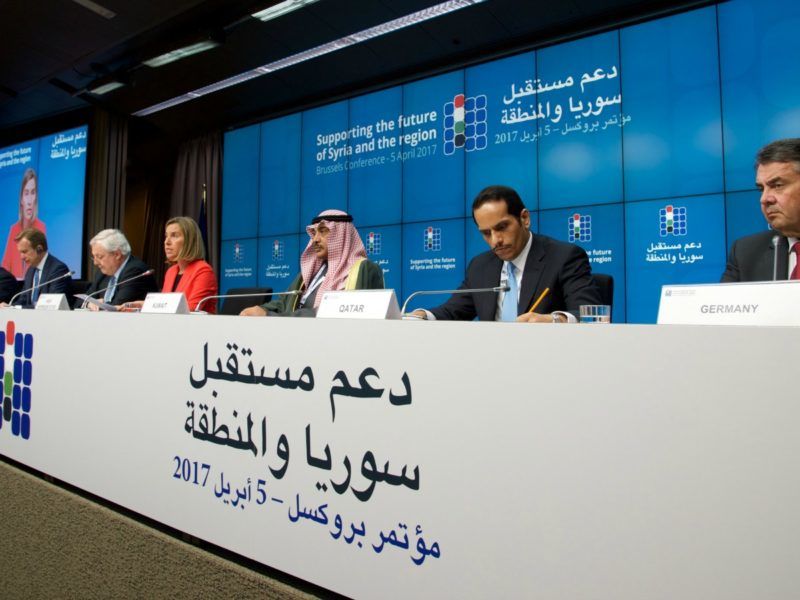 “A number of important donors have not yet been in a position to confirm their financing for 2018,” UN Emergency Relief Coordinator Mark Lowcock told a news conference. “That includes the United States, which has been providing more than $1 billion a year to Syria and the region in recent years.”

While the United Nations said more money may still come in, Washington is reviewing its Syria policy, including humanitarian support, and Trump has questioned the value of such aid.

The European Union, which along with the United States is the world’s biggest aid donor, is also struggling to agree with its member governments on a second package of three billion euros ($3.66 billion) for refugees in Turkey.

Turkey’s Deputy Prime Minister Recep Akdag told the conference the EU must do more on the crisis in Syria, which has also triggered a spike in immigration to Europe that has posed a challenge for the bloc’s governments since 2015.

Humanitarian aid will also go to Lebanon, Jordan and Iraq, which are overwhelmed with some six million Syrian refugees.

“The war hasn’t stopped, people are still being bombed and live in refugee camps. The pledges today show that the conditions for Syrians will only get worse in the future,” said Rouba Mhaissen, a Syrian-Lebanese activist working for refugees.

The failure to reach the UN goal at the pledging conference showed the challenge for Syria as other conflicts, from Afghanistan to Myanmar, also demand attention and money.

Achim Steiner, head of the UN Development Programme, said there was a risk of so-called donor fatigue because of the sheer length of the multi-sided war.

“It is a natural phenomenon as the conflict continues year after year,” Steiner said. “In 2018, the humanitarian drama … is actually at its peak.”

The international community’s split over Syria was also highlighted by the fact that Damascus was not taking part in the conference organised by the EU. Russia sent no top state officials and was only represented by its EU ambassador.

The envoy, Vladimir Chizhov, challenged the EU’s line that the West would only focus on humanitarian assistance but provide no money for reconstruction of Syria for as long as Assad does not share power with the opposition.

Ambassador Vladimir #Chizhov: 'We agree that aid must come to everyone in need wherever they are, in #EasternGhouta, #Aleppo, in the villages of al-Fu'ah and #Kefraya still besieged by terrorists, in #Raqqa totally destroyed by #US-led coalition bombings' #SyriaConf2018 pic.twitter.com/DTdCJhUyoG

But the West has ruled that out, seeing money as its best leverage to try to force Assad into peace talks, so far in vain.

1️⃣ No military solution to the war in Syria
2️⃣ Key role of the @UN in leading the political process
3️⃣ Humanitarian and financial support to Syrians inside and outside the country
4️⃣ Recognition of the work of civil society@FedericaMog at #SyriaConf2018 pic.twitter.com/eyNDDboAC5

"Let us invest all our resources to move from a context of never-ending escalations, to one of successful political negotiations. Let us try to win together the peace, or rather to let the Syrians win the peace" #SyriaConf2018 @FedericaMog https://t.co/NDZ5w6ZzZt pic.twitter.com/aKEEAHODd3

7 years of conflict in Syria.
Millions driven from their homes.
It’s time to end the suffering so Syrians can rebuild their lives and their country. #SyriaConf2018https://t.co/1yuqDl8AeF pic.twitter.com/uAlZ1Yebfh