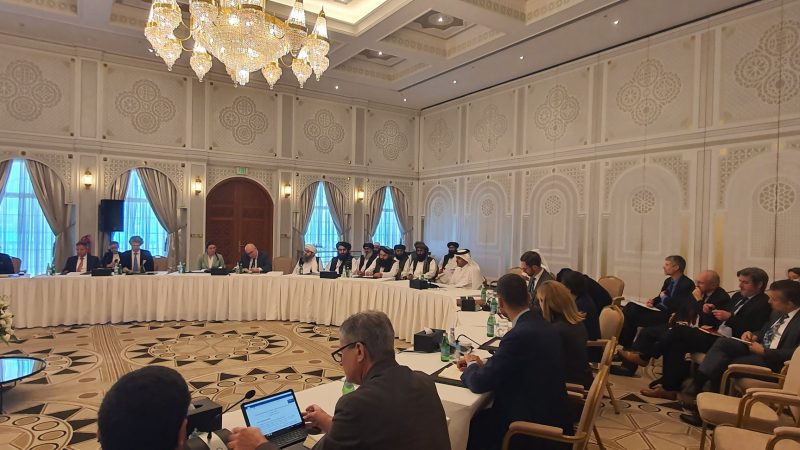 The Taliban meet the EU and US representatives in Doha. [Handout photo Twitter]

The Taliban held their first face-to-face talks with a joint US-EU delegation Tuesday (12 October) in Qatar, as Brussels pledged one billion euros ($1.2 billion) in aid for Afghanistan.

At the Doha meeting and a conference of the world’s major economies, the G20, the message for the Taliban was the same: the world is committed to humanitarian aid for Afghanistan’s suffering people, and the country must not become a base for militants.

IMAGES from meeting between Taliban regime delegation and ambassadors and representatives of US, EU and other western countries in Doha. #Afghanistan pic.twitter.com/48oUFVHgAS

The European Union opened the virtual G20 summit by pledging the one-billion-euro aid package, including money for urgent humanitarian needs and Afghanistan’s neighbours taking in Afghans fleeing the Taliban.

The Afghan people should not pay the price of the Taliban's actions.

Today, we announce a support package worth around €1 billion for the Afghan people and neighbouring countries.

We must do all we can to avert a major humanitarian collapse in Afghanistan.#EUSolidarity

The hardline Islamist Taliban are seeking recognition, as well as assistance to avoid a humanitarian disaster, after they returned to power in August following the withdrawal of US troops.

She stressed the funds are “direct support” for Afghans and would be channelled to international organisations, not to the Taliban’s interim government, which Brussels does not recognise.

“We have been clear about our conditions for any engagement with the Afghan authorities, including on the respect of human rights,” she said.

Italian Prime Minister Mario Draghi, who hosted the G20 talks, said they agreed to work together to provide humanitarian help for the Afghan people and that this must involve contacts with the Taliban.

“It’s very hard to see how one can help the Afghan people… without some sort of involvement of the Taliban government,” he said.

The G20 includes the United States, EU, China, Turkey, Russia, India and Saudi Arabia, among others.

“Instead of responding and arguing… we now have an awareness of this emergency and of the enormous responsibilities that the G20 has towards the Afghan people,” he told a post-summit press conference.

US President Joe Biden was among leaders attending the summit. A White House statement said the leaders “discussed the critical need to maintain a laser-focus on our enduring counterterrorism efforts, including against threats from ISIS-K”.

That was a reference to Islamic State-Khorasan, the Islamic State group’s offshoot in the region, which is a bitter rival of the Taliban and has staged deadly attacks.

G20 leaders reaffirmed a commitment to providing humanitarian assistance directly to the Afghan people through independent international organizations, and “to promote fundamental human rights for all Afghans, including women, girls and members of minority groups”, the United States said.

International aid has been blocked to Afghanistan since the Taliban returned to power following the withdrawal of US and other international troops after 20 years of war.

The country’s assets held abroad have been frozen, while food prices and unemployment are rising, prompting warnings of a humanitarian disaster once winter arrives.

EU states are wary at the prospect of a surge of Afghan asylum-seekers trying to enter the bloc, as happened in 2015 with Syrians fleeing their country’s war.

Brussels’ calculation is that donating money to help stabilise Afghanistan and assist countries between it and Europe could stem any flow.

While the virtual summit took place, direct talks were held in Doha. That meeting was facilitated by Qatar, which has long hosted a Taliban political office.

“I think engaging with them (the Taliban) is the most important now,” said Mutlaq al-Qahtani, a special envoy to Qatar’s foreign minister, who brushed aside the question of whether to recognise a Taliban government.

“A priority as we speak now is the humanitarian (situation), is education, is free passage” of people wishing to leave, he told the Global Security Forum conference in Doha.

US State Department spokesman Ned Price said the United States was looking at “pragmatic, practical engagement”, rather than recognition.

The relationship “will be determined by the conduct of the Taliban and any future government”, Price told reporters in Washington.

EU spokeswoman Nabila Massrali described the meeting as “an informal exchange at technical level” that “does not constitute recognition of the ‘interim government’.”