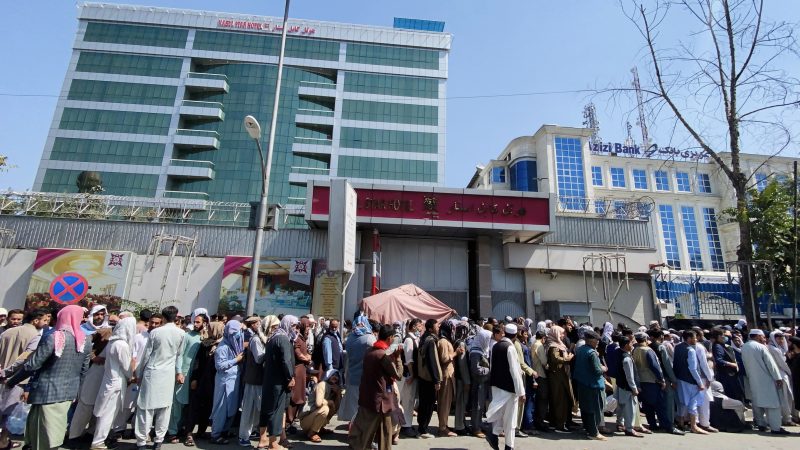 People line up to withdraw money from banks as banks allowed only $200 withdrawal per week from an account at their central branches in Kabul, Afghanistan, 1 September 2021. [Stringer/EPA/EFE]

Afghanistan’s new Taliban rulers struggled to keep the country functioning on Wednesday (1 September) after the final withdrawal of US forces, with foreign donors alarmed about an impending humanitarian crisis.

Two weeks since the Taliban’s sweep into Kabul brought a chaotic end to 20 years of warfare, the Islamist militants have yet to name a new government or reveal how they intend to rule.

In an administrative vacuum, prices have soared and crowds have gathered at banks to withdraw cash.

There is a huge cash crisis here in #Afghanistan, my father spent the whole night at door of a bank to get 100$ but unsuccessful. There are hundreds meter lines in front of the banks. #FinancialCrisis#CashCrisis#Kabul pic.twitter.com/cz047Uv4Gq

Heavily armed fighters have imposed control on the capital, but Taliban officials were grappling with keeping hospitals and government machinery running following the end of a huge airlift of foreigners and Afghans who had helped Western forces.

The new, Taliban-appointed central bank head has sought to reassure banks the group wants a fully functioning financial system, but has so far given little detail on how it will supply funds for it, bankers familiar with the matter said.

The foreign minister of neighbouring Pakistan, which has close ties to the Taliban, said he expected Afghanistan to have a new “consensus government” within days.

In Washington, where the end of America’s longest war has sparked the biggest crisis of President Joe Biden’s administration, Undersecretary of State Victoria Nuland said the United States is looking at all possible options and routes to continue to help Americans and legal permanent residents leave Afghanistan.

Washington would keep having conversations with the Taliban that serve US interests, she told reporters, adding the United States would look at how it could give aid to Afghanistan without benefiting any government that it forms.

People fearful of life under Taliban rule rushed to the borders.

In Panjshir province, members of local militias and remnants of former military units were still holding out under the leadership of Ahmad Massoud. Senior Taliban leader Amir Khan Motaqi called on them to put down weapons and negotiate.

“The Islamic Emirate of Afghanistan is home for all Afghans,” he said in a speech.

The Taliban have declared an amnesty for all Afghans who worked with foreign forces during the war that started when they were ousted from power in 2001 over their refusal to hand over al Qaeda leader Osama bin Laden after the Sept. 11 attacks.

Taliban leaders have called on Afghans to return home and help rebuild. They have promised to protect human rights in an effort to present a more moderate face than their first government, which enforced a strict version of sharia law, including banning women from education and employment.

But their more immediate concern is staving off economic collapse. Afghanistan desperately needs money, and the Taliban are unlikely to get swift access to the roughly $10 billion in assets mostly held abroad by the Afghan central bank.

The Taliban have ordered banks to reopen, but strict weekly limits on withdrawals have been imposed.

The #Taliban have imposed limits on bank withdrawals in #Afghanistan, a media report said.

The central bank of Afghanistan, De Afghanistan Bank, has ordered pvt & international banks to limit withdrawal to individual customers to $200 which equals AFS2,000 per week. pic.twitter.com/JeLxUehV8g

The acting central bank governor, Haji Mohammad Idris, met members of the Afghanistan Banks Association and other financiers this week, said two bankers who attended the meeting. The militant group was working to find solutions for liquidity and rising inflation, they quoted Idris as saying.

“They were very charming and asked banks what their concerns were,” said one of the bankers who requested anonymity.

Long lines have formed at banks, the currency is sinking, inflation is rising and many offices and shops remain shut.

“Everything is expensive now, prices are going up every day,” said Kabul resident Zelgai.

Outside the capital, humanitarian organizations have warned of impending catastrophe as severe drought has hit farmers and forced thousands of rural poor to seek shelter in the cities. But foreign donors are unsure about whom to speak to.

Taliban officials have said the problems will ease once a new government is in place, and have urged other countries to maintain economic relations.

Bankers outside Afghanistan said it would be difficult to get the financial system running again without the bank specialists who joined the exodus. “I don’t know how they will manage it because all the technical staff, including senior management, has left the country,” one banker said.

The European Union will need to engage with the Taliban but will not rush into formally recognising them as the new rulers of Afghanistan, a senior EU official said. 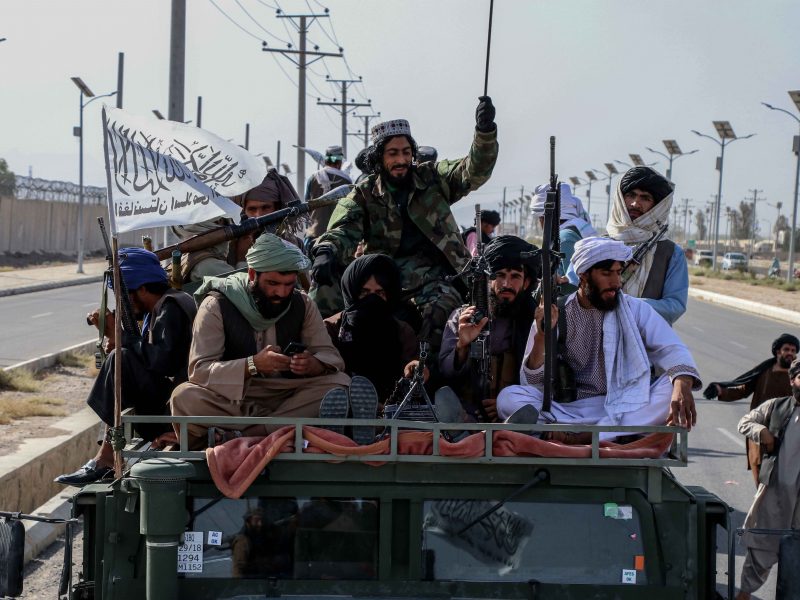 EU says it will not rush into recognising the Taliban

The European Union will need to engage with the Taliban but it will not rush into formally recognising the Islamist militant group as the new rulers of Afghanistan, a senior European Union official said on Wednesday (1 September).

More than 123,000 people were evacuated from Kabul in the US-led airlift after the Taliban seized the city in mid-August, but tens of thousands of Afghans at risk remained behind.

With Kabul’s airport out of action, efforts to help Afghans fearful of the Taliban focused on arranging safe passage across the borders with Iran, Pakistan and central Asia.

At Torkham, a crossing with Pakistan just east of the Khyber Pass, a Pakistani official said: “A large number of people are waiting on the Afghanistan side for the opening of the gate.”

Britain and India held separate talks with Taliban officials in Doha amid fears that up to half a million Afghans could flee.

The UN refugee agency, UNHCR, said on Wednesday that Afghans had so far largely stayed within Afghanistan and only small numbers had fled to neighbouring countries. It called for $300 million in international funding for the humanitarian emergency.

The Taliban said they had surrounded forces in Panjshir, the only province still resisting, and called on them to negotiate a settlement. Some Taliban leaders mocked the United States.

“Your power is gone, your gold is gone,” Anas Haqqani, a Taliban leader, said on Twitter, posting a photo of himself holding discarded shackles as he toured Bagram prison, where he was held for years by US forces.

One response to “Taliban wrestle with Afghan economy in chaos, humanitarian crisis”