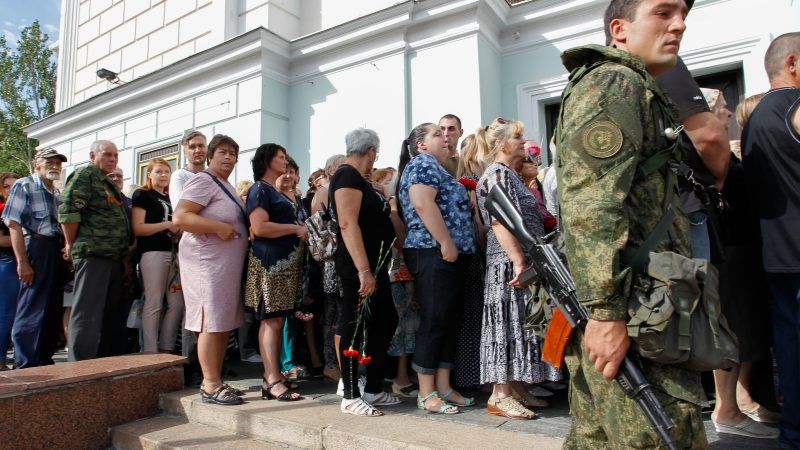 The funeral in eastern Ukraine’s Donetsk of a pro-Russian rebel leader killed in an explosion last week drew vast crowds of mourners on Sunday (2 September), Reuters footage from the breakaway region showed.

Alexander Zakharchenko was fatally injured in an explosion in a cafe in Donetsk on Friday. Russia’s foreign ministry accused Ukraine of his murder, while Kyiv blamed his death on separatist infighting.

The official media outlet of the self-proclaimed Donetsk People’s Republic said 200,000 people had gathered for the funeral of Zakharchenko, the republic’s leader since 2014. Reuters was unable to verify that figure.

Footage showed long queues of mourners, many carrying red carnations, lining up to pay their respects outside the city’s main opera theatre, where Zakharchenko’s coffin stood.

“I am here because I really respected him. He did everything for the people … A good person is gone,” Anna, a member of the crowd, said through tears.

A woman who described herself as Zakharchenko’s former neighbour, Natalya, was also crying.

“It is such a shame, such a waste. He was everything to us … He left, he left fighting for his country. There are no words,” Natalya said.

“We will not forgive this,” she added.

His coffin, draped in the separatist region’s flag and the flag of the Russian Airborne Troops, a division of Russia’s armed forces, was carried out of the theatre to silent applause, footage showed.

It was placed on the gun-carriage of a large artillery weapon, which was then towed past the crowds by a truck.

“I didn’t know him personally but he was a leader to all of us,” Katya, a young woman attending the funeral, said.

At least five other leading separatist commanders have been killed in unexplained circumstances not connected to front-line combat since the conflict started in 2014, when Russian-backed rebels threw off Ukrainian central rule in an armed uprising.

A shaky internationally-brokered ceasefire has been in force since 2015, halting large-scale fighting, but frequent outbreaks of shooting on the front line between the separatist and Ukrainian forces continue.

Russian foreign minister said on Saturday talks on Ukraine with leaders from Russia, Ukraine, France and Germany, known as the Normandy format, were impossible after the killing of Zakharchenko, Interfax agency reported.

“It is impossible to talks about upcoming meetings in the Normandy format as many of our European partners wanted,” Sergei Lavrov told reporters.

“This is a serious situation that needs to be analysed,” Lavrov said.

#Zakharova: Instead of implementing the Minsk agreements and looking for means to settle the internal conflict, Kiev's party of war is implementing a terrorist scenario and is aggravating the already difficult situation in the region

There are 'reasons to believe' that #Zakharchenko’s murder was orchestrated by #Kiev – #Zakharova https://t.co/Vf0FgXXCGG pic.twitter.com/QWYqe3aLme

It's a Russian invasion and occupation, stupid! The Ukrainian internet is rapidly filling up tonight with examples of people complaining about (and in some cases, correcting) inaccurate international media coverage of the Zakharchenko killing and the wider Donbas war pic.twitter.com/AJUvlMUJyO

Ambassdor Mykola Tochytskyi, Head of the Mission of Ukraine to the EU, sent to EURACTIV the following comment regarding this Reuters article.

“There are no rebels in Donbas. There are Russian military, Russian proxies and Russia-orchestrated self-proclaimed, non-recognized by the international community terrorist organizations who are responsible for shooting down MH 17, daily killings of Ukrainian civilians and military as well as holding innocent Ukrainians hostage.”

“Moreover, it seems that the abovementioned article is about glorifying the terrorist leader by providing the number of people who attended his funeral. There is no word about Russian occupation of the sovereign territory of Ukraine and Russian military presence in Donbas.”

The murder of Zakharchenko led to further provocative developments in the occupied territory of Donbas. The occupation administration of the Russian Federation in the temporarily occupied territories of Donetsk and Lugansk regions reportedly decided to hold so called “snap elections” of the chiefs of the militants and their illegitimate representation bodies on 11 November. This decision derails persistent international efforts aimed at resolving the situation caused by Russia’s armed aggression against Ukraine and was condemned by Ukraine and the international community including the EU as a blatant violation of the Minsk agreements."

“It is also a pity that while citing several times spokesperson of Russian Foreign Ministry M. Zakharova regarding the events happening in the Russia-occupied Ukrainian territory, there are no quotations of the representatives of Ukrainian government.”

“In this regard, I would highly appreciate your further efforts in ensuring that events in Ukraine are objectively reflected”, the letter concludes.