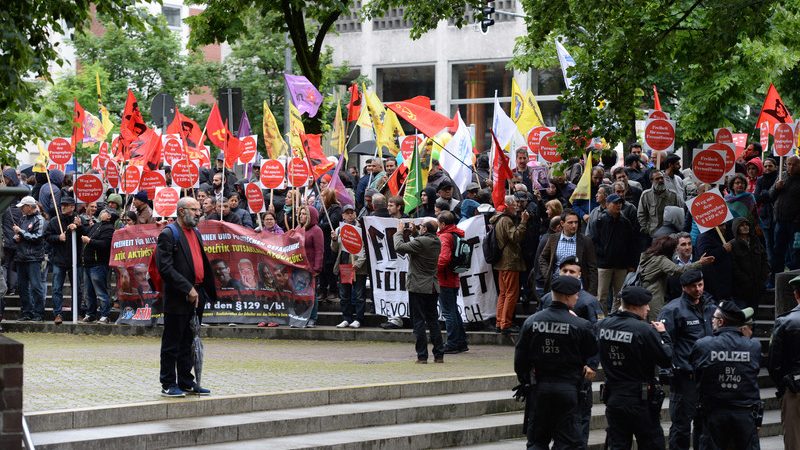 Ten members of a banned Turkish communist party were sentenced to several years in jail by a court in Munich Tuesday (28 July) after a four-year trial over their role in what Ankara considers to be a terrorist organisation.

The nine men and one woman were convicted of recruiting members, organising events and raising money for the Turkish Communist Party/Marxist-Leninist (TKP/ML).

But the defence team and their supporters have called their prosecution a “political trial” that simply pandered to Turkish President Recep Tayyip Erdogan.

The judgement said the defendants had acted in the knowledge that the party was planning a coup in Turkey as well as carrying out deadly attacks there.

One of them, named by activists as Muslum Elma, was handed a sentence of six and a half years for being a ringleader in the group. The other nine received between two years and nine months and five years for supporting a foreign terrorist organisation.

The 10 defendants were arrested in 2015 and held in custody for several years. In the course of the trial, all but Elma were released.

The trial was repeatedly accompanied by demonstrations, and on the day the guilty verdicts were handed down protesters chanted “show trial”.

Ahead of the sentencing, defence lawyers argued that although the TKP/ML had been banned in Turkey since its foundation, it was not banned in Germany or elsewhere.

They argued that Turkey had repeatedly exerted pressure on Germany to take legal action against members of opposition groups in European exile.

A total of six people reportedly died during the period they were active, including four children in a botched bomb attack that had been intended as a warning to a local politician in Turkey.

Judge Manfred Dauster said “structural repression” of minority groups in Turkey was a mitigating circumstance in the defendants’ favour. “Such repression is capable of giving rise to resistance,” he said.

He also said the party had posed no risk to Germany and the European Union.

The 60-year-old is accused of having played a senior role in the party since 2002 and of having headed its international arm since late 2004.

Under his leadership, this branch of the party is said to have generated almost half a million euros ($585,000) annually, making a significant contribution to the movement.

Elma’s lawyer Stephan Kuhn spoke of a “political trial” that was “more than problematic in terms of the rule of law”.

Kuhn asked why the German judiciary was so interested in such a complex trial. “This is the unresolved question, which even this verdict will not answer and which necessarily leaves us very dissatisfied,” he said.

The TKP/ML has been engaged in a sometimes violent campaign against the state in Turkey since it was founded in the 1970s.