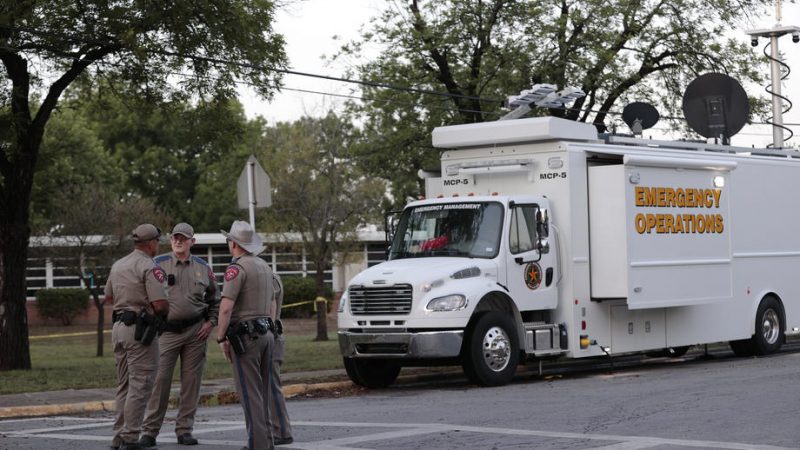 Police and investigators continue to work at the scene of a mass shooting at the Robb Elementary School which killed 19 children and two adults according to Texas Governor Greg Abbott in Uvalde, Texas, USA, 25 May 2022. [EPA-EFE/AARON M. SPRECHER]

The murder of 19 children and two teachers at a South Texas elementary school has prompted a call to action from US President Joe Biden, who urged Americans to confront the country’s gun lobby and pressure Congress to tighten gun laws.

In the deadliest school shooting in nearly a decade, Salvador Ramos, 18, began his rampage on Tuesday (24 May) when he shot his grandmother, then crashed his car while fleeing near Robb Elementary School in Uvalde, Texas.

Officers saw the gunman, clad in body armor, emerge from the crashed vehicle carrying a rifle. He then entered the building and opened fire, authorities said.

All told, the teenager fatally shot at least 21 people before police apparently shot and killed him. His grandmother survived. Ramos acted alone, and his motive was unclear, authorities said.

The shocking murders, coming 10 days after an avowed white supremacist shot 13 people at a supermarket in a mostly Black neighborhood of Buffalo, prompted Bidento address Americans directly about the long-festering issue of gun control.

A Democrat, Biden accused the gun lobby of blocking enactment of tougher firearm safety laws. He ordered flags flown at half-staff daily until sunset on Saturday in observance of the tragedy.

“I am sick and tired of it. We have to act,” he said without going into specifics.

Mass shootings in the United States have frequently led to public protests and calls for stricter background checks on gun sales and other firearm controls common in other countries, but such measures repeatedly fail in the face of strong Republican-led opposition.

Pope Francis on Wednesday said he was “heartbroken” by the shooting and called for an end to “the indiscriminate trafficking of weapons.”

Robb Elementary School houses second, third and fourth grade children, meaning pupils would likely have ranged in age from 7 to 10.

“My heart is broken today,” Hal Harrell, the school district superintendent, told reporters late in the day, his voice quaking with emotion. “We’re a small community and we need your prayers to get us through this.”

The community, deep in the state’s Hill Country region about 80 miles (130 km) west of San Antonio, has about 16,000 residents, nearly 80% of them Hispanic or Latino, according to US Census data.

The rampage was the latest in a series of mass school shootings that periodically reignite a fierce debate between advocates of tighter gun controls and those who oppose any legislation that could compromise the right of Americans to bear arms guaranteed by the US Constitution.

In the wake of the shooting in Uvalde, at least two Texas Republican elected officials called for beefing up security at schools and arming teachers, an approach opposed by gun control advocates.

“The reality is that we don’t have the resources to have law enforcement at every school,” Texas Attorney General Ken Paxton told Fox News on Tuesday. “Nothing is going to work perfectly.”

The Texas rampage stands as the deadliest school shooting since a gunman killed 26 people, including 20 children, at Sandy Hook Elementary School in Connecticut in December 2012.

Democratic US Senator Chris Murphy of Connecticut, a leading advocate for legislation to restrict the proliferation of guns, told reporters: “I just don’t understand why people here think we’re powerless.”

“You know, guns flow in this country like water. And that’s why we have mass shooting after mass shooting,” he said.

The shooting appeared to strike a disturbing chord with many Americans, who have grown numb by the sheer number of such incidents in recent years.

Shaken by the events in Texas, NBA coach Steve Kerr refused to talk about basketball at a pre-game news conference on Tuesday and instead called for stricter gun control. “When are we going to do something?” he asked.

Firearms became the leading cause of death for US children and adolescents starting in 2020, surpassing motor vehicle accidents, according to a University of Michigan research letter published in the New England Journal of Medicine last month.

Tuesday’s horrors were reflected on the Facebook page of Robb Elementary School, where posts earlier this week showed the usual student activities – a field trip to the zoo and a save-the-date reminder for a gifted-and-talented showcase.

On Tuesday, a note was posted at 11:43 a.m.: “Please know at this time Robb Elementary is under a Lockdown Status due to gunshots in the area. The students and staff are safe in the building.”

A second post said: “There is an active shooter at Robb Elementary. Law enforcement is on site.” Finally, a note was posted advising parents they could meet their children at the civic center.