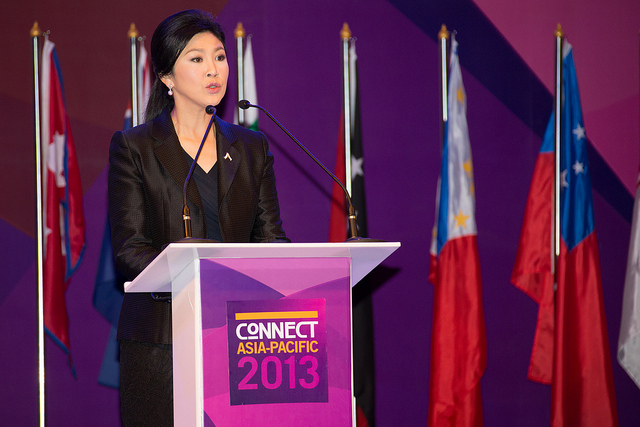 Yingluck Shinawatra in 2013, when she was still prime minister of Thailand. [ITUPictures/Flickr]

EXCLUSIVE/The heads of the European Parliament’s foreign affairs committee and ASEAN delegation have written to the Thai ambassador in Brussels, as the row over an invite to deposed former prime minister Yingluck Shinawatra escalated Thursday (3 December).

Earlier Thai media reported that the country’s Supreme Court would refuse Shinawatra permission to leave the country to visit either Brussels or Strasbourg.

Shinawatra, who was overthrown in May 2014 by the military, is now facing corruption charges relating to a rice subsidy scheme.

In October Elmar Brok, chair of the Foreign Affairs committee, and Werner Langen, head of ASEAN (Association of South East Asian Nations) delegation wrote to Shinawatra, inviting her to discuss the political situation in the country.

Thai authorities questioned both the legitimacy of the request, and even the authenticity of the letter.

On Thursday, the two influential MEPs repeated the invitation – this time writing directly to the Thai mission to the European Union in Brussels.

The pair, in a joint letter seen by EURACTIV, wrote they are “following the political situation with great concern.”

“As a democratic institution, the European Parliament traditionally invites all sides on an equal basis in order to gain a full insight into the political situation of a country, with particular emphasis on the point of view of both the government and the opposition, as well as civil society.”

They repeated – and attached – the original invitation to Shinawatra, adding pointedly, “We usually address an invitation directly to the person concerned rather than going through government channels.

“However, we are pleased to share with you the invitation letter that had been sent to Ms Shinawatra.”

Brok and Langen also invited representatives of the military junta to put their point of view – either in the Brussels or Strasbourg parliaments or in Bangkok itself.

The Thai mission to the European Union told EURACTIV they were open to talking to MEPs, or any other EU officials, at any time.

A spokesman said, “We would like to reiterate that Thailand welcomes the visit of our European friends, including MEPs, to Thailand to discuss with stakeholders and men in the street on the issues of great concerns and that are mutually beneficial to Thailand and the EU.”

They also stated that any Supreme Court decision on Shinawatra’s travel was purely at the discretion of the court itself.

Thailand has become almost a pariah state within the EU since the military coup, with a nearly-completed Free Trade Agreement with Bangkok suspended in the wake of the coup.

Last month EURACTIV revealed that there was “probably zero” chance of it being resurrected whilst the junta, under General Prayut Chan-ocha, was in power.

The number two official in the European Commision Trade directorate-general, Miguel Ceballos-Baron, said the deal would “never” be ratified by the Parliament in the current situation.

Separately, Thailand is under scrutiny for its key fish export sector, with a ‘yellow card’ imposed for breaches of the IUU (Ilegal, Unregulated and Unreported) fishing protocols, which have seen accusations of forced labour in Thai fishing fleets.

That yellow card is up for a renewal by the end of the year. An upgrade to a red card would see a ban on all imports from Thailand, affecting its key tuna industry.

A British lawyer and activist, Andy Hall, is also facing a court appearance, and up to seven years in jail next month, for helping research a report into labour abuses in the tinned fruit processing industry.

This week, the International New York Times was forced to publish a partly-blank front page in Thailand, after local distributors refused to print a story on the declining Thai economy.

The military freely make use of ‘lese-majeste’ laws, which criminalise all criticism of the monarchy, and the 88-year old King Bhumibol Adulyadej, the world’s longest-serving monarch.

Index on Censorship and Reporters Without Borders (RSF) have cited this as a ‘chilling effect’ on any free media in the country.

According to a recent report by RWB, the most critical journalists have been sent to “behaviour adjustment camps”, in what it calls a “blitzkrieg” on press freedoms.

The junta has insisted it plans elections at some point in late 2017, after a lengthy process of constitution drafting and a referendum, due to take at least 20 months.