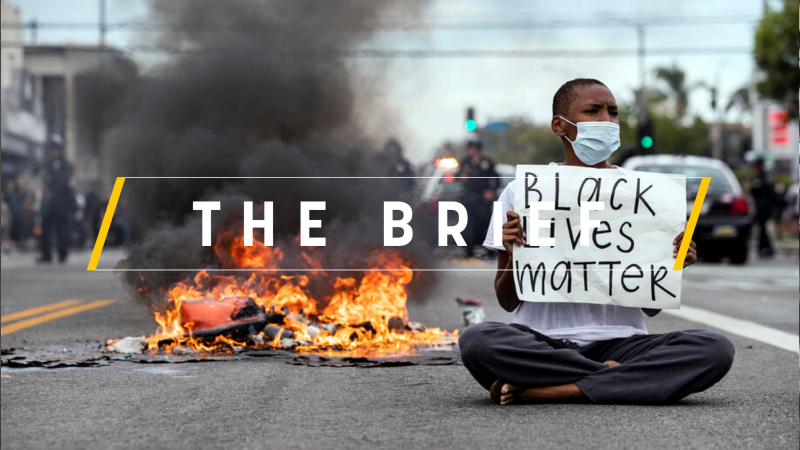 The story is pretty much known: George Floyd was murdered 10 days ago in Minneapolis when a police officer pinned him to the ground with his knee on his neck for nearly nine minutes with the help of three other officers. Since then, protests have roiled the country.

Police fired rubber bullets at demonstrators rallying against police violence. The president ordered tear gas to be thrown at peaceful protestors to clear the way for a photo-op.

The images and videos are brutal, violent, horrifying. What they are not, however, is “shocking.” Anyone who is surprised by George Floyd’s killing and the reaction has not been paying attention.

The list of victims to American police brutality is long.

George Floyd is not even the first black man to die on video in Minnesota. Police hit Philando Castile with five bullets at close range at a traffic stop in 2016. Eric Garner was choked to death by police on video on the streets of New York City in 2014, because police suspected he was selling cigarettes illegally.

American racism does not end at police violence. Black author Scott Woods reminds us that “hate is just one manifestation [of racism]. Privilege is another. Access is another. Ignorance is another. Apathy is another.”

Racism is also the massive health disparities that have black Americans dying from COVID-19 at three times the rate of whites and black mothers three times more likely to die in childbirth.

It is an egregious wealth gap. The average white household is worth ten times more than a black one, according to Pew Research. It is the long-standing legacy of racist housing policies and unequal access to quality education.

As a white woman from middle America, my voice should not be sought out on a subject that I will never experience or understand, and all too often, white discussions on race take place without any people of colour present.

In Germany, this happened last weekend, when an all-white panel on a talk show discussed the events in the US. In response, former Member of the Bundestag Özcan Mutlu called on the show to “finally learn to talk to affected people instead of about them.”

This begins with taking the time to listen, and learn. Let us read about the history of slavery, colonialism, and the other foundations for the racist systems in place today. Let us seek out resources like The 1619 Project from the New York Times or books by black authors like Ta-Nehisi Coates, Ibram X. Kendi, and Audre Lorde.

Let us dig into the research on the most effective reforms to end police violence from places like Campaign Zero. Let us follow black activists on social media like Rachel Cargle, Deray McKesson, and Brittany Packnett Cunningham.

It also means hearing the words and experiences of European blacks and other people of colour (including Fatima El-Tayeb, Natasha Kelly, Katharina Oguntoye in the German-speaking world) and recognising that Europe is far from immune to racism.

On Monday (1 June), Chiponda Chimbelu wrote in an op-ed for the Deutsche Welle that “there’s no relief for me that I live in Germany [instead of the US]… For years, black men and women have been murdered and killed, in the US and Europe, even by the police, just because they are black.”

This includes multiple incidents of German police violence against people of colour, detailed here by Thembi Wolf of VICE, as well as the death of Adama Traoré in French police custody in 2016.

The violence in the US lays bare that it is past time to start putting in the work. This can start by stating without caveat or apology: Black lives matter.

The European Commission’s decision to approve an agreement between Germany’s big power firms risks distorting energy market competition, according to the head of another company, who explained why he has started legal action.

The lack of physical meetings during the COVID-19 lockdown has been devastating for nearly 1,200 freelance interpreters in the European institutions. Some of them took part in a protest at the heart of the EU institutions.

The European Commission’s work programme for 2020 made no reference to plans to update the bloc’s stance on Arctic matters, in a setback for those hoping it would step its engagement with the region. EU’s new Arctic policy still work in progress, the new ambassador admits.

EU consumers are influenced by environmental concerns and willing to change their eating habits accordingly but lack of information, high prices and limited availability of sustainable foods still stand in the way, according to a new survey from the European Consumer Organisation.

Business in oil, gas and coal is becoming increasingly unprofitable as global fossil reserves could lose around two-thirds of their value in the next 50 years, plummeting from around $39 trillion to $14 trillion, according to a study published by British think tank Carbon Tracker.

The European Union’s ICT agency for internal security and border control, eu-LISA, has signed a framework contract for a new biometric matching system which aims to create a database of fingerprints and facial images of more than 400 million third-country nationals by 2022.