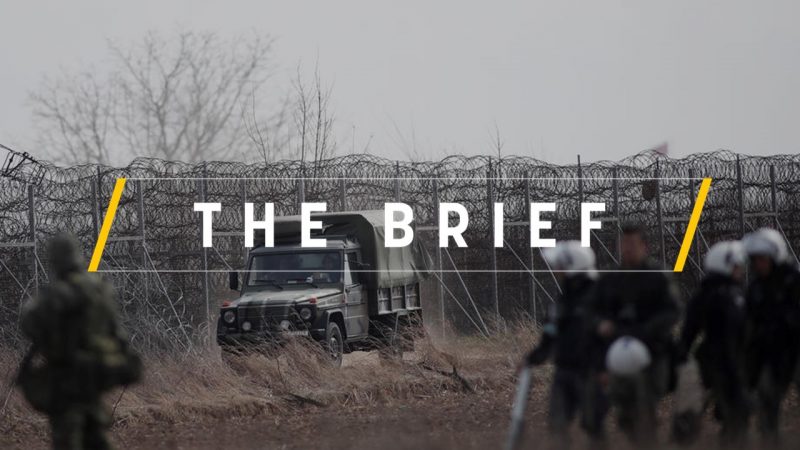 With migrants trapped in no-man’s-land at the Turkey-Greece border, there are probably few tougher jobs in Europe these days than being a Greek border guard.

With the world’s eyes upon them, whatever course of action the guards take, even if not entirely by their own choice, will be wrong.

In Turkey,  President Erdoğan has gone rogue again and is using refugees as a bargaining chip to blackmail Europe into giving more money for accommodating the 3.6 million Syrian refugees in Turkish camps.

And in Greece, on the south-eastern edge of Europe, the EU’s foreign policy failure has turned into a problem on the ground.

The build-up of migrants along the Greece-Turkey border has caused fears of a repeat of the 2015 European migrant crisis, in which more than one million people crossed into Europe.

The Greek government announced it would boost patrols of its land and sea borders but also suspend asylum applications for one month, saying it was invoking an emergency EU clause to do so; a step that has no basis in international law, according to the UNHCR. The Greeks mentioned the coronavirus – not in the books, indeed.

The European Border and Coast Guard Agency (Frontex) announced on Monday it will launch a rapid border intervention (RABIT) to assist Greece in dealing with the large numbers of migrants at its external borders.

Clashes already erupted this week as Greek police blocked thousands at the border, firing teargas at the refugees who responded by lobbing rocks.

So what are border guards supposed to do?

Just imagine: If, as a border guard, you step back and allow refugees and migrants to pass through, this will encourage others to follow and give a casus belli to right-wing politicians and media who scream that Europe is under attack by Islam while Brussels is doing nothing to prevent it.

If, however, you use force, the so-called ‘push-backs’, you will be condemned for inhumane treatment of refugees and violation of international human rights conventions, even if you’re only trying to guard the Schengen border and prevent illegal entries.

How, then, is Greece supposed to handle the latest crisis on Europe’s southern flank? What does ‘protection of Europe’s external border’ even mean? Other than the obvious, that no one is supposed to shoot at refugees or capsize their rubber dinghies?

Video footage of the last few days, spread across social media platforms, provides a valid argument for saying that, for those arriving at our shores, Europe’s face cannot and should not be Frontex alone.

The 2016 EU-Turkey deal bought Europe some time, but it definitely did not prevent Erdoğan from weaponising the plight of refugees, and there is no guarantee that a revamped deal will make a real difference in the future.

Far worse for what is left of Europe’s credibility is that Ankara once again caught the bloc on the hop, giving the green light to ‘millions’ refugees and migrants on its territory to head for Europe.

Brussels has for years failed to find consensus on a coherent migration policy, largely ignoring the humanitarian catastrophe simmering in Syria as soon it disappeared from the headlines.

And the EU’s crisis jet-set diplomacy always seems to come rather too late.

A visit to Ankara by the EU’s chief diplomat Josep Borrell and Crisis Management Commissioner Janez Lenarcic, as well as the three EU presidents’ stroll along the Greek-Turkish border, won’t change that perception.

Charles Michel’s assurances of “support for Greek efforts to protect the European borders” won’t either.

Greece has called for a unified front of European partners, but will the EU be able to go beyond endless quarrels over a joint approach to migration, which has poisoned European politics since 2015?

For many, the dramatic events at the Greek-Turkish border resemble the 2015 refugee crisis, when more than a million refugees, mostly from Syria, crossed into Europe across the Mediterranean or overland. But is this really so? EURACTIV takes a closer look.

The leaders of the European Commission, Parliament and Council visited Greece and sent a strong message to Ankara, saying Europe will not bow to the migration pressure at its external borders.

Bulgarian Prime Minister Boyko Borissov failed in his mediation mission in Ankara which aimed to bring Greece, Turkey and EU leaders to a summit in Sofia to prevent a new refugee crisis in Europe.

Italy’s agriculture minister Teresa Bellanova has asked the European Commission for a postponement of some of Common Agricultural Policy (CAP)’s administrative procedures to relieve Italian farmers stricken by the novel coronavirus (COVID-19) emergency.

The Commission’s Climate Law will confirm on Wednesday that EU countries will need to become climate neutral by 2050. But plans for 2030 leaves Europe little time to get ready for the UN climate summit in November, and twelve EU member states are pushing for an accelerated timeline.

EU member states will consider a coordinated fiscal stimulus to spur the economy as the coronavirus could bring the eurozone economy to a recession, according to the latest OECD economic forecast.

The ‘Group of 7’ of wealthy countries committed to adopt stimulus packages to address the fallout of the coronavirus, but decided not to take coordinated action at this stage.

Don’t forget to check out this week’s edition of our Transport Brief.

The European Commission is pursuing a renewed and ambitious relationship with the African continent – Benjamin Fox explains what’s happening in this video.