The Brief – Why Poland puts its chips on America 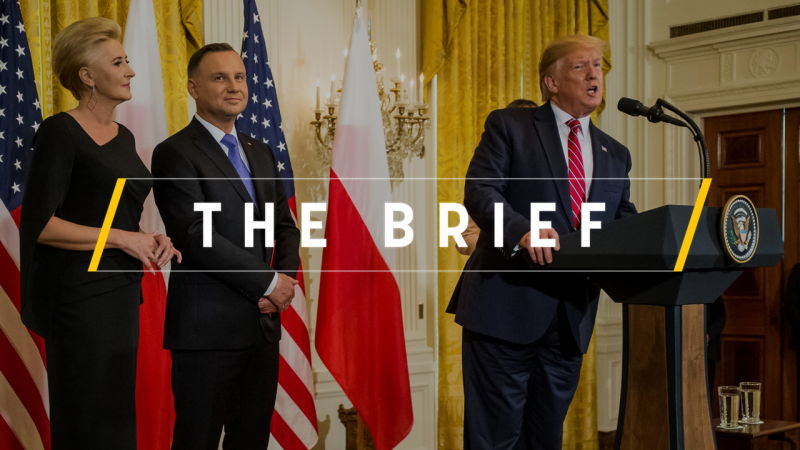 Poles like to be reminded of the one time they came to America’s rescue.

On the occasion of state visits, leaders of both countries like to wax lyrical about General Tadeusz Kosciuszko, the Polish military commander who joined George Washington’s army in 1776 and drew up the military defence strategy for the two Battles of Saratoga, the turning point of the American Revolution.

His slogan “For your freedom and ours” became one of Poland’s unofficial mottos in the years to follow, long after he returned to lead an insurrection against Russia.

It is partly due to the historic memories like this that Warsaw’s foreign policy is built around its close relationship with Washington.

Bearing in mind Poland’s big eastern neighbour, perhaps the government in Warsaw hopes Washington will return the favour one day…

On Wednesday (12 June), Polish President Andrzej Duda and Donald Trump signed a joint declaration on defence cooperation, which should increase the permanent US military presence on Polish territory in the near future by about 1,000 additional soldiers.

While the Polish got less than expected – unlike a classic army base like Ramstein in Germany, the presence of US troops in Poland will have a hybrid character – Trump said after the meeting:

“The alliance between Poland and the United States has never been as strong as it is now”.

The security policy of Polish-American relations contains military cooperation to large arms acquisition contracts. And Poland has been an ally just to Trump’s taste, preparing to buy a contingent of 30 F-35 fighter aircraft.

It would, however, be a mistake, to believe Poland’s strive for US presence is only because of Trump’s presidency, or Warsaw’s own nationalist tendencies.

Its foreign policy is dictated by relations and interest, but first and foremost historical trauma. Its general direction would always be transatlantic, regardless of who sits in the White House.

There are many who suggest Poland should let go of the mirage of “Fort Trump” and pursue a more realistic security policy in collaboration with European and NATO allies. But after Georgia and Ukraine, Poland has little faith that Europe can protect it from Russia, in the event of a confrontation or escalation of tensions.

The fact is that the silent death of the Weimar Triangle only deepened the Polish view that they have to look across the Atlantic if they want to have tangible security assurances.

Germany, as Poland’s neighbour, should be much more involved in Poland’s defence. But Berlin has not been taking Warsaw’s Russian concerns seriously and with Nord Stream 2, it sent a signal that basically said ‘we hear you but have decided to ignore your concerns’.

Paris, on the other hand, preferred not to be bothered with what happens in the East as it is traditionally focused more on Africa and is not leading any of NATO’s forward presence in Eastern Europe.

And in truth, Poland’s Eastern European neighbours do not necessarily disagree with Warsaw’s solo run, when it comes to its principle.

“Increasing the number of American soldiers in Poland means strengthening the security of Lithuania and other Baltic states,” Lithuania’s Defence Minister Raimundas Karoblis said in comments on the Polish-American declaration.

“This is an advantage not only for Poland, but also for the three Baltic states,” Karoblis said.

The EU’s plan for the next five years will get the green light at next week’s summit but what did member states really think of the strategic agenda? Take a peak behind the curtain here.

Top jobs and other affairs are likely to leave no time for an agreement on a climate plan for 2050. Draft conclusions say there’ll be a deal in early 2020 instead.

Europe’s liberals have changed their name but one of the leading candidates to lead the faction in the next Parliament has dropped out of the race.

Central and Eastern European leaders met in Budapest today to discuss the EU’s future trajectory. Despite early indications, they are shying away from naming a joint candidate to secure of the main institutional positions.

Fiat-Chrysler-Renault remains “interesting”, according to one of the French ministers accused of helping torpedo the mega merger. A Swedish start-up has secured a billion dollars in funding to set up Europe’s first battery gigafactory.

Matteo Salvini and Marine Le Pen’s far-right group assembled in Brussels today. The Identity and Democracy group angered journalists by applauding every speech during what was supposedly a press conference. Salvini unsurprisingly is also irking one of the most affable EU officials.

Boris Johnson won the first round of the Conservative leadership contest. Here he is defending comments he made about Muslim women looking like “letterboxes”.

Your weekly dose of digital news is out. Could copyright rules already be reviewed? What does next week’s summit have in store for tech? Find out here.

And do you think you’re a real EU nerd? Clued-up on your Bubble knowledge? Have a go at our two twitter polls, here and here. No cheating!

The ECOFIN council in Luxembourg. Ministers will talk climate change, among other concerns.