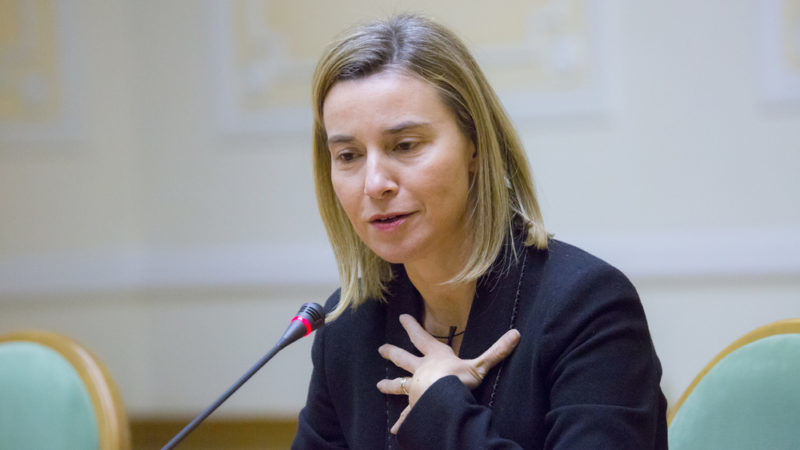 Federica Mogherini has come in for strong criticism regarding Russia. [Slavko Sereda/ Shutterstock]

A Czech think tank has slammed EU foreign affairs chief Federica Mogherini for spending two years avoiding taking the Russian disinformation threat seriously. The appeal has been signed by high-profile personalities such as Russia’s Gary Kasparov and a former president of Estonia.

In its open letter to Mogherini, the European Values think tank describes “the aggressive actions of the Kremlin” as “unprecedented in the modern era”.

“Invasion of neighbouring countries, massive bombings and killings of civilians, and the first annexation of a foreign land by force since World War II, constant violations of other states’ borders, kidnapping foreign citizens, harassment of foreign diplomats, or massive cyber attacks are all in Russia’s current regime toolkit,” the think tanks writes.

It further says that all these offensive actions are “accompanied by a massive, persistent, ongoing, brutally aggressive disinformation campaign”.

“A campaign that has been active in Europe for at least three years, establishing its channels, finding the right amplifiers and multipliers for its message – which is aimed at destabilising our societies, meddling in our elections and referendums, misleading our political leaders and breaking up the EU unity by supporting those who want to destroy it. It has been building a wide range of communication structures in most of the EU member states, platforms that have already been functioning for a long time and have reached considerable results that cannot be erased without significant long-term counter-effort.”

“Despite the seriousness of this threat, EU High Representative for Foreign and Security Policy Federica Mogherini has spent the last two years trying to avoid naming Russia as the main creator of hostile disinformation. We as European security experts have seen her constantly appease the Russian aggression,” the think tanks writes.

The authors of the open letter state that the only response to Russia’s disinformation threat, the eleven-man EEAS East STRATCOM team working in the European External Action Service (EEAS), is “absurdly understaffed”. Moreover, the team is aided mainly by member states, not by EEAS, they add.

“This team has no budget whatsoever – despite being tasked by the European Council to counter the Kremlin disinformation machine, which is boosted by over €1 billion annually. Based on decision of the EEAS leadership run by Federica Mogherini, the EU spends literally nothing on countering one of the biggest challenges of our world today – a hostile disinformation campaign, which is successfully undermining our democratic societies,” they continued.

Jakub Kalensky, a member of the East STRATCOM team, recently described one important tactic as being to divide EU public opinion by denigrating a particular person, a state, or a specific political party.

Asked what kind of budget and what sort of team was needed to counter such serious threats, Kalensky explained that the best solution is probably not to concentrate on the Brussels task force but to have hybrid threat centres in national capitals.

The Czech Republic is reported to be the only country to have established such a force, although it came under attack from its own president.

Czech 'hybrid threats' centre under fire from country's own president

A new Czech Interior Ministry team set up this week to monitor and analyse “hybrid threats” to security, such as disinformation campaigns, has come under fire from the office of the country’s own president.