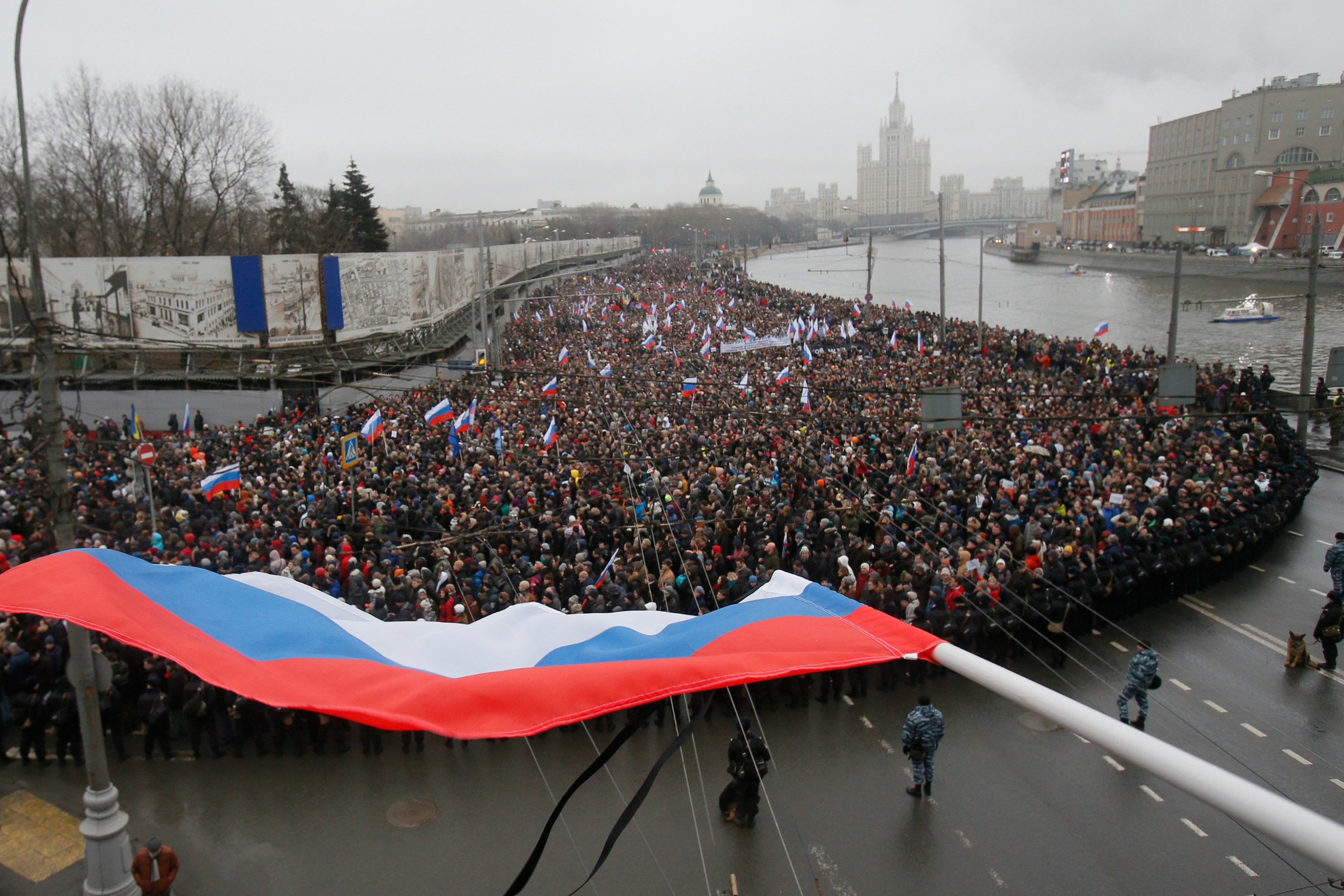 Thousands of Russians marched in Moscow in memory of Nemtsov. [Reuters]

Tens of thousands of Russians marched through central Moscow yesterday (1 March), carrying banners declaring “I am not afraid” and chanting “Russia without Putin” in memory of murdered Kremlin critic Boris Nemtsov.

Families, the old and the young, walked slowly, with many holding portraits of the opposition politician and former Deputy Prime Minister, who was shot dead while walking home from a nearby restaurant on Friday night.

The authorities have suggested that the opposition itself may have been behind his shooting in an attempt to create a martyr and unite the fractured movement.

His supporters have blamed the authorities.

“If we can stop the campaign of hate that’s being directed at the opposition, then we have a chance to change Russia. If not, then we face the prospect of mass civil conflict,” Gennady Gudkov, an opposition leader, told Reuters.

“The authorities are corrupt and don’t allow any threats to them to emerge. Boris was uncomfortable for them.”

His murder has divided opinion in a country where for years, following the collapse of the Soviet Union, many yearned for the stability later brought by former KGB agent Vladimir Putin.

A small but active opposition now says Putin’s rule has become an autocracy that flaunts international norms after Russia seized Ukraine’s Crimea peninsula last year, fanned nationalism over the separatist war in eastern Ukraine, and clamped down on dissent.

“[Nemtsov] was harmful to the authorities, but the authorities themselves are criminal. The authorities have trampled on all international rights, seized Crimea, started war with Ukraine,” said Yuri Voinov, an elderly physicist.

Police said 21,000 people attended the march. The organizers put the numbers at tens of thousands, but attendance appeared smaller than the 50,000 people the opposition had hoped for.

Reuters reporters at the march estimated the numbers in the tens of thousands.

People walked in the rain within view of the Kremlin’s red walls and past the spot, now covered in flowers, where Nemtsov was shot dead.

One elderly woman, her hair tucked into a woolen cap, held up a hand-written sign to cover her face: “It’s a geopolitical catastrophe when a KGB officer declares himself president for life. Putin resign!”

Putin has vowed to pursue those who killed Nemtsov, calling the murder a “provocation”.

National investigators who answer to the Russian leader offered a 3-million-rouble reward, around $50,000, for information on Nemtsov’s death. They say they are pursuing several lines of inquiry, including the possibility that Nemtsov, a Jew, was killed by radical Islamists or that the opposition killed him to blacken Putin’s name.

Nemtsov’s funeral is due to be held on Tuesday in Moscow.

Putin’s opponents say such suggestions, repeated over pro-Kremlin media, show the cynicism of Russia’s leaders as they whip up nationalism, hatred and anti-Western hysteria to rally support for his policies on Ukraine and deflect blame for an economic crisis.

“We are told on TV that a conspiracy by the West and those among us who have sold out to them are behind our poverty. People should throw away the TV set and go to protest,” said Olga, 42, who declined to give her last name.

Some Muscovites have accepted the official line and appear to agree that the opposition, struggling to make an impact after a clampdown on dissent in Putin’s third spell as president, might have killed one of their own.

“The authorities definitely do not benefit from this. Everybody had long forgotten about this man, Nemtsov … It is definitely a ‘provocation’,” said one Moscow resident, who gave his name only as Denis.

Some young people walking in central Moscow asked: “Who is Nemtsov anyway?”

Nemtsov, who was 55, was one of the leading lights of a divided opposition struggling to revive its fortunes, three years after mass rallies against Putin failed to prevent him returning to the presidency after four years as prime minister.

With an athletic build and characteristic mop of curly hair, Nemtsov had been a face of the opposition for years, along with anti-corruption blogger Alexei Navalny and former prime minister Mikhail Kasyanov, though no one figure has succeeded in uniting the ranks of opposition-minded Muscovites.

The opposition has little support outside big cities and Putin has now been Russia’s dominant leader since 2000, when ailing President Boris Yeltsin chose him as his successor, a role Nemtsov had once been destined to play.

Even many of Putin’s opponents have little doubt that he will win another six years in power at the next election, due in 2018, despite a financial crisis aggravated by Western economic sanctions over the Ukraine crisis and a fall in oil prices.

Many opposition leaders have been jailed on what they say are trumped-up charges, or have fled the country.

Nemtsov, a fighter against corruption who said he feared Putin may want him dead, had hoped to start the opposition’s revival with a march he had been planning for Sunday against Putin’s economic policies and Russia’s role in east Ukraine.

The Kremlin denies sending arms or troops to Ukraine.

In a change of plan, the opposition said Moscow city authorities had allowed a march of up to 50,000 people alongside the River Moskva to commemorate Nemtsov’s death.

Ukrainian President Petro Poroshenko said Nemtsov had told him about two weeks ago that he planned to publish evidence of Russian involvement in Ukraine’s separatist conflict.

"He was killed just before a demonstration against the effects of the economic crisis and the conflict in Ukraine which he was organizing for 1 March," she said.

"The EU expects the Russian authorities to conduct a full, rapid and transparent investigation into this assassination, bringing the culprits swiftly to justice."

UK Prime Minister David Cameron said he was sickened by the "callous" murder of Nemtsov, whom he called a "man of courage and conviction".

"The Russian people have been deprived of a champion of their rights. Boris Nemtsov is dead. But the values he stood for will never die," he said.

German Chancellor Angela Merkel was "shocked by the treacherous murder" and urged Putin to ensure the killers were caught.

German Foreign Minister Frank-Walter Steinmeier said: "Like many people in Russia, we are also shocked by the cold-blooded murder of this prominent member of the opposition on the streets of Moscow.

"He publicly stood up for his beliefs and opposed corruption and arbitrariness even if his own freedom suffered as a result. This murder has now put an abrupt and cowardly end to the work of a fearless voice."

"Boris Nemtsov was a brave and tireless defender of democracy and a fierce fighter against corruption," said French President Francois Hollande.

"I would like to express my immense worry and my deep hope that enough energy will be devoted to explain the motives of this crime and to explain its circumstances," said Polish President Bronislaw Komorowski.

"I condemn this act and hope that the political leadership and the judicial system in Russia will do their utmost to investigate the murder promptly and transparently," said Finnish Prime Minister Alexander Stubb.

"Murder of Boris Nemtsov shows that Russia slides down to darkness of terror against its own people," Lithuanian President Dalia Grybauskaite said on Twitter.

U.S. President Barack Obama on Friday [27 February] condemned the "brutal murder" of Russian opposition politician Boris Nemtsov, and called for a full investigation into the killing.

"The United States condemns the brutal murder of Boris Nemtsov, and we call upon the Russian government to conduct a prompt, impartial, and transparent investigation into the circumstances of his murder and ensure that those responsible for this vicious killing are brought to justice," Obama said in a statement.

Kerry said that U.S. intelligence did not know who was behind Nemtsov's death in Moscow. "The bottom line is we hope there will be a thorough, transparent, real investigation, not just of who actually fired the shots but who if anyone may have ordered or instructed or been behind this," Kerry told the ABC program "This Week."

The murder of Kremlin critic Boris Nemtsov has dampened any hope for a peaceful political transition in Russia away from President Vladimir Putin's government, Garry Kasparov, a prominent opposition voice, said in an interview yesterday [1 March].

Kasparov, a former world chess champion who lives in self-imposed exile in the United States, offered a gloomy outlook for Russia's political opposition.

"Boris hoped, in vain as we understand, to see some form of peaceful transition into normal, civilized democratic government," Kasparov told Reuters, describing Nemtsov as one of Russia's leading advocates for non-violent political expression.

"I see no chance for Russia now to move from Putin's brutal dictatorship into something that will be even [as] mild as we had 10 years ago," he said, predicting it could take a violent mass uprising if change was to come.

Kasparov joined supporters of Nemtsov who suspect Russian authorities were behind the killing, sending a clear message to anti-Putin activists.

"It's a signal to everybody that's engaged in opposition activities that all bets are off," Kasparov said.

"We're not going to waste time to prosecute you ... pretending that we are respecting the rule of law. We'll simply eliminate you."

0 responses to “Thousands in Moscow chant ‘Russia without Putin’”