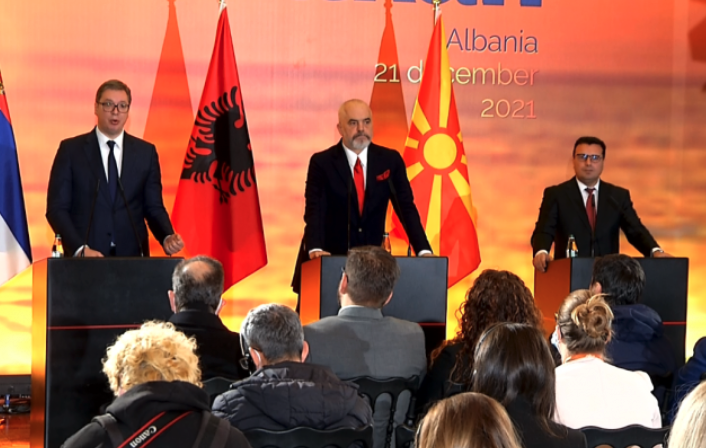 Albanian Prime Minister Edi Rama was joined by Macedonian counterpart Zoran Zaev and Serbian President Aleksander Vučić in the Albanian city of Elbasan just one day after protests in the Albanian capital against the initiative saw the burning of the Serbian flag and several arrests.

The agreements come under the so-called Open Balkan initiative, previously referred to as the Mini-Schengen. It envisages cross border trade, residence, business, and movement for the citizens of each country, in each signatory country.

The aim is to create a borderless zone that facilitates open trade and investment between Western Balkan countries before progressing towards EU membership, which still remains distant.

Kosovo, Montenegro and Bosnia and Herzegovina have not signed up to the initiative, citing Serbia’s failure to recognise Kosovo’s sovereignty, as well as fears that the project might undermine their EU accession and effectively keep them outside the bloc.

“The agreements that will be signed will set an important step forward towards our goal; to guarantee the complete freedom of movement of people, goods, capital and services,” Rama said in his opening speech and repeated his call “for everyone to join.”

“’Open Balkans’ is an inclusive initiative and certainly encouraging the other three in the region to be part of this effort. As we move forward for the better of our people,” Rama added.

He noted that Open Balkan is a part of the Berlin process – an initiative to boost regional cooperation among the Western Balkan countries and their European integration- and is a milestone, preparing them for EU integration.

Addressing concerns that the EU may not favour the initiative, Rama introduced Enlargement Commissioner Oliver Varhelyi and asked him if he supported Open Balkan.

Varhelyi answered: “I have always been very positive towards this proposal…You must continue to promote this initiative…I admire how strongly you feel about this initiative.”

He added that “we in the EU think that according to EU rules, any regional cooperation is welcome, and for the benefit of both parties…I invited the other three partners to return to regional cooperation because not only does it increase business opportunities, but it offers increased employment. It can change the realities on the ground.”

In his opening speech, Vučić reiterated the call for other countries to join the initiative, adding that it is “laying the foundations for the future of our children.”

Zaev noted that it would be his last Open Balkan meeting, likely due to his pledge to step down as prime minister.

In his speech, he said the initiative shows the three countries will “not be held hostage in the EU integration process.”

“The Open Balkan’s has brought us together as three great leaders; this is a great friendship we have been able to develop together. This initiative is for the good of our citizens and is an instrument to let go of our troubled past.”

Agreements were also signed between Serbia and Albania on Mutual Recognition of Approved Business Entities for Security and Safety and between North Macedonia and Albania.

The sixth agreement relates to the cooperation of accreditation bodies in all three countries.

In practical terms, citizens of the three countries will now be able to live in one of the other countries without a permit, have their qualifications recognised, and goods and services will transverse borders with minimal checks.

“Very soon at the beginning of the new year, they [exporters, importers, and farmers] will no longer experience the stress of waiting at the border,” said Rama.