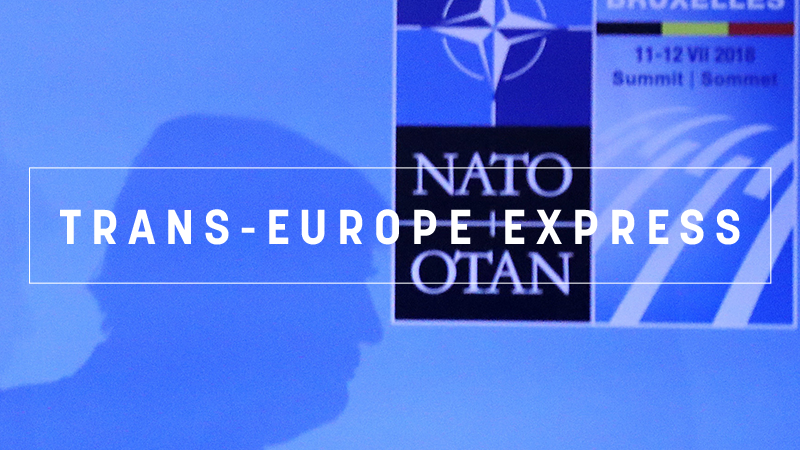 NATO held its first summit in its grandiose new buildings this week. This should have suggested a new beginning for the transatlantic alliance. But the impression from the discussions was quite the reverse.

As one reporter suggested, this was a sadomasochistic extravaganza: Donald Trump first horsewhipped his allies, and then had his happy moment, suddenly declaring victory and having made NATO “much stronger”.

Criminals should be treated with more respect than the way Trump treated his colleagues. A source told your correspondent that every time the US president heard messages he didn’t like, he just ignored the speaker and even turned his back on them to speak to his own delegation.

At one point, Emmanuel Macron had to pause his speech for almost a minute, waiting for Trump to finish his private conversation and refocus on the meeting.

Outside the meeting room, to a mixture of general dismay and disbelief, Trump said the “level of spirit” had been “incredible”, declared the summit a big success, and bragged that he had been able to squeeze an additional $33-$40 billion in defence spending from his allies.

This, however, is not true. NATO Secretary-General Jens Stoltenberg said this money had been committed in advance, and the figures were published in a paper two days ahead of the summit.

It was, therefore, a fudge: intended for an audience that is not interested in the details, which is more or less Trump’s electoral base.

Trump treats his allies like subordinates, and in his own words, he treats Russia respectfully, as a “competitor”.

As ever, consistency does not trouble this Commander-in-Chief. On the first day, he said Nord Stream 2 was bad. But on day two, he said “frankly, maybe everybody is going to have a good relationship with Russia, so there will be a lot less problem with the pipeline”.

Trump gave no clear answer about what his position would be on the Russian annexation of Crimea when he meets Vladimir Putin on Monday in Helsinki, or how he would he respond when the Russian president raised the issue of stopping NATO military exercises in the Baltic states.

“There is no longer confidence in NATO,” a diplomat told EURACTIV. Fewer and fewer European countries trust that the US would defend them if they were invaded by Russia.

Under Trump, NATO will soon be as dead as the proverbial dodo. The EU needs to overcome its internal divisions fast and make sure NATO is replaced by a real European defence alliance.

Under surveillance. The Commission adopted as set of measures to closely monitor Greece’s fiscal policy after an eight-year-long bailout programme.

Poker and MEPs. The external income of MEPs raises questions: some MEPs take part in activities likely to lead to conflicts of interest, while the EP stands by.

Better late than never? The man behind Romania’s EU bid thinks the last decade of membership has been mishandled but now hopes there is change in the air.

Beyond coal. Central European countries are starting to plan for life after coal power. Campaigners wants all parts of society to be included in the transition.

Ivory and gold. According to a recent investigation almost three-quarters of all ivory sold legally in Europe is in fact illicit.

Pigs in space. Data access has become a key issue for the agricultural sector, which could benefit from European space programmes. The European Commission allegedly continues to serve the interests of big companies, which could lead to new food scandals soon.

Push and pull. The President of the European Central Bank urged eurozone members to complete the banking union with a European Deposit Insurance Scheme.

Under pressure. EU leaders pressed the president of Ukraine once again to take credible steps to fight rampant corruption in the country.

Gordian Knot. The UK outlined plans for a Ukraine-style association agreement with the EU as it published its long-awaited White Paper on relations with the EU after Brexit.