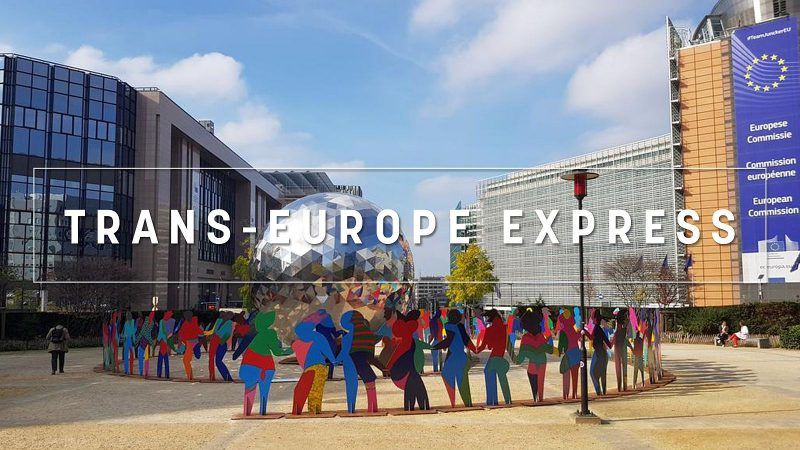 Trans-Europe Express is EURACTIV's weekly roundup of news from across Europe.

A sculpture representing shiny happy people holding hands appeared on Schuman roundabout this week while EU leaders held their most useless EU summit in years, in what was a botched attempt to fix issues such as Brexit and migration.

Someone commented that the artefact wasn’t exactly a good idea, at a time when actual people are dying in the Mediterranean and wasting away in Greek ‘hotspots’ or Libyan slave camps.

The leaders were unable to make any progress on migration. Representing the country holding the EU presidency, Austrian leader Sebastian Kurz made a presentation and then several of the leaders stated their positions, which according to our excellent sources remain unchanged from past discussions. The last one was in Salzburg.

It is clear that the Visegrad countries, unwilling to receive any migrants at all, will not change positions.

But their bad example is becoming contagious. France has been extremely unwilling to receive even a dozen migrants from ships doing circles in the Mediterranean in search for a port to dock.

The country of human rights, France, is only 26th out of 28 when it comes to refugee acceptance rate. Only Poland and the Czech Republic score worse.

But it remains seriously underfunded because member states do not pay what they have committed. This was the case last year, and our sources tell us nothing has changed.

The so-called disembarkation platforms, presented as the miracle solution at the June summit, have been a spectacular flop. What leaders have agreed, again according to our sources, is not to talk about them. And to keep their fingers crossed, that if silence is kept, something could eventually happen.

An EU-Arab League summit involving all 28 leaders will take place on 24-25 February, in the Egyptian resort of Sharm El Sheikh.

“This is a step forward, a possibility to continue to talk about this,” one of our sources said.

The EU and the 22-member Arab League have never had summits together. The idea for such a summit was raised in Salzburg, the only novelty being the date, a month or so before a hard or soft Brexit takes place.

Just to keep the ball rolling, EU leaders will seek a photo opportunity at the Sharm El Sheikh beaches at a very dramatic time for Europeans.

Frankly, we are not tempted to report about the shiny happy leaders holding hands, because before they speak to others, they should have a minimal understanding between themselves.

Government reshuffle. France has new ministers for agriculture, culture and the interior after France’s President Macron changed his team.

Voting fatigue? Support for the EU is at its highest level for 26 years in France but the enthusiasm is not reflected in the projections for turnout at the next European elections.

“Italy is Italy”. Prime Minister Conte warned that there will be no step back on the “beautiful” draft budgetary plans as Italy’s ‘unprecedented’ breach of fiscal rules clouded this week’s euro summit.

Caught in conflict. Diplomatic tensions flared between Spain and Belgium over the Catalan crisis after Flemish and Spanish authorities traded accusations.

Rural battle. Poland will vote in local elections on Sunday that are seen as a key test for the country’s controversial nationalist governing party as it gears up for EU and legislative elections next year.

Grassroot hopes. Poland’s energy transition was a political no-go in the coal-dependent country but the situation is evolving, a climate activist and Green local politician in the COP24 host city of Katowice says.

Beers on tap. The German FDP’s Spitzenkandidat told EURACTIV Germany all about her plans for the upcoming elections.

Fighting mood. Hungary called on the EU to stop funding for NGOs that undermine the sovereignty of neighboring countries such as Israel and Egypt or states that contribute to illegal migration.

Youth exodus. Around one-fifth of Serbian citizens want to emigrate in search of a better life and better-paying jobs, according to a new survey.